Greetings from the Allegheny Mountains.

I am glad I got here a few days before our bike tour.  There is a lot to explore near Ohiopyle State Park.

One day I walked down to the little tourist community of Ohiopyle.  The town is small with a visitor's center, a general store, bakery and sandwich shops, a motel and B&B, and a few white-water outfitters.

The walk down is on a steep, gravel trail from the campground to the GAP trail.  But then it is a short flat walk on the rail trail across two bridges that cross a river with rapids.

I stood on the bridge a while and watched a guy in a small kayak playing in the rapids.  He’d shoot between two big rocks then turn and paddle his way back up that shoot and choose another place to get through the rapids.  It was fun to watch.

One of the bridges I crossed while on the trail I remembered reading about in The Great Allegheny Passage Companion.  The railroad built it with the idea another track would be crossing there too, so the pillars are wide enough to support two tracks.  But the second track was never built.  The top of one of the pillars has a lot of pennies, nickles, and dimes thrown on it.  I was shocked at how small they looked from my vantage point.  Teeny Tiny pennies on a pillar.

There are a lot of hiking trails.  Before I arrived in town I took a hiking trail that looped around an area that used to be a resort during the limber and railroad days.  I got to see a waterfall and I took a picture of this interesting tree with two legs.. 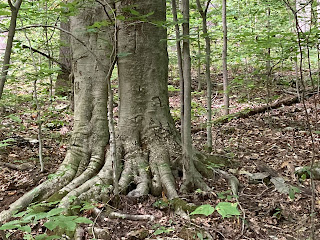 A lot of trees like this one had many lover’s initials carved in the bark.  I searched for dates and didn’t see any dates.  How do I know if any were from the days when women in long skirts and men in suits would stroll down these paths?
If you are going to carve your initials or a message in the bark of a tree, (which I don't recommend or encourage), then carve out the full 4-digit year too.  Because 20 could be your age or last year or 100 years ago.
When I saw this sign in the park in Ohiopyle I did a cheer and took a picture.  Exactly what I keep saying! 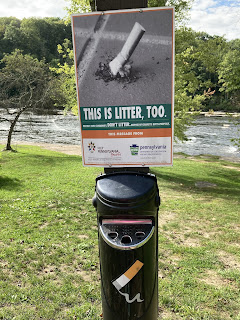 Near the train depot in town there was a rest stop set up for an adventure cycling trip.  Adventure Cycling is a national organization that advocates for trails and bike routes and also runs lots of tours each year.  That organization is instrumental in advocating the creation of the bicycle highways that I see signs for in Pennsylvania.  This part of the GAP is part of Bicycle Hwy S. 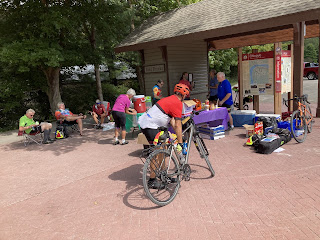 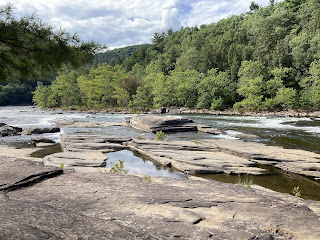 The river in Ohiopyle is pretty, with rapids and at least three waterfalls that I visited.

Which comes to the story of my first sign from Heaven.

I walked past the visitors center and followed some painted foot steps on the sidewalk.  One led left to the Natural Water Slide.  The other led right to Cucumber Falls.

It was getting hot and I was drawn to the natural water slide.

It is in a gorge with lots of flat rocks to stand on while having fun to watching a young couple bounce on their bottoms down a frothy rocky stream. 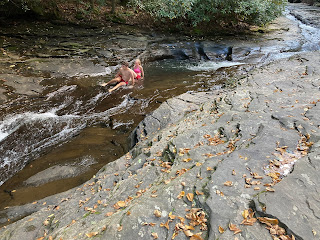 I decided not to try it.  I didn't want to risk having a bruised bottom or broken tail bone.

I was standing next to the stream with my back to it looking at the lovely stone gorge walls when I heard something drop in front of me.  My first thought was it was a walnut, there are some walnut trees around here.  I looked down and there at me feet was a cucumber!

Wait a minute, cucumbers don't grow on trees!  Hmmmm.  I smiled, this must be a sign I need to go see Cucumber Falls.  I picked up the cucumber and we went to see that waterfall.  It is a pretty bridal veil falls, the kind with an undercut in the rock and you can walk behind it.  I didn't do that and nothing special happened to me there.  The cucumber from the sky must have landed by me by mistake.

By this time I had probably walked four miles and I had to walk back up that steep gravel hill to the campground.

The next day I drove all the way to Cumberland where I met up with a fellow Florida recumbent rider.

A mutual friend, Ad Carson from Milwaukee  suggested I reach out to Cheré and I am glad I did!  She showed me where the end mile marker is for the C&O trail (which will be the beginning for us, that trail starts in DC at mile post zero.

Cheré had shown me around Sanibel Island in Florida when I met up with some trike riders there last year.  She is a snow bird and I didn’t realize her northern home is near where the GAP and the C&O meet.

We went for a 20 mile ride on the C&O.  The ride alleviated some of my fears of the condition of the trail.  The muddy spots are few and easy to get around.  When they are wet we will just walk past them.  No big deal.

Chere and I took our selfie by the mule statue near the scenic railway train depot which is where the GAP trail begins. 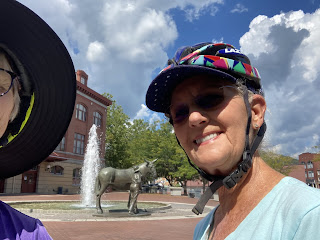 I got to see some locks and we saw some pretty ducks, a deer, and lots of turtles. 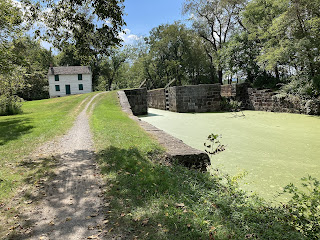 Cheré told me about a woman that was a spy for.. I think it was the Confederates.  She was caught and spent time in prison.  The Pollach cemetery where she and some relatives are buried is right by the trail. 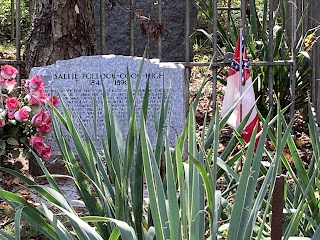 I read an inscription on one of the graves that said something about he was a member of the only rightful American christian church or something like that.  I said, "Wait, I thought America did not have a designated religion!"
Chere said I would see a lot of that in this area. 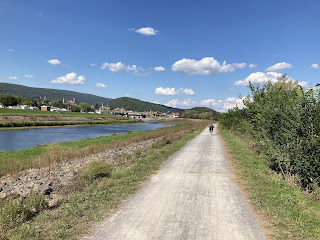 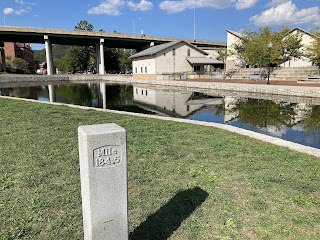 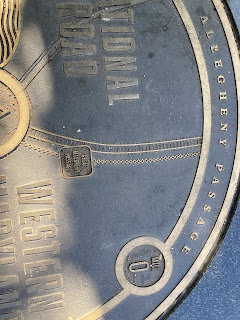 It was a good hour drive to Cumberland but not only did I get to ride with Cheré but I planned to meet Bill Metzger the author of the book on the GAP.

I called him and when we connected he said he was an hour from home.  But our talk was confusing to me.  He was tired and his wife, Pam suggested I come visit tomorrow.  I told he I didn’t want to drive an hour again the next day.  “We are only 15 minutes away,” Pam said.

What?  I thought you were a whole hour from home.  We went back and forth and I was thinking these people are not working on all cylinders.  They were probably thinking the same thing about me.

After dining on Pizza with Cheré I drove back to Confluence to meet Bill.

What fun!  He said he would have been a stand up commedian but then ended up in a wheel chair. 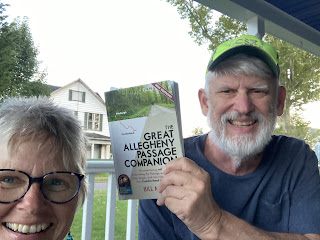 We chatted for a good hour and a half when the light started to dim and I had to pull out.

Bill said, "You will find it."

I looked at him quizically.  I didn't know I was searching for something.  We had asked me if I had dated.  Was that it?

No, he said not necessarily.  The it isn't necessarily a man.  He said he did a lot of traveling too and assured me I would find it.

I thought I was traveling to connect with friends and family, to experience those moments of joy and awe, to over come moments of challenge.

Is this another message from heaven?  I will find it.  Kind of like, if you build it, they will come.