Wind At My Back, Friends Pulling Me Forward

I was up at 4:45 because I was keyed up about beating the heat on my cycling trip home.  I would be riding from Tarpon Springs to Inverness, a ride of over 80 miles.  It had been a few years since I had ridden that far, I was a bit nervous.

It was predicted to be 95 degrees, humid, and sunny on Sunday.  I packed two thermoses of ice water, a bottle of Gatorade, and a baggie with salty pretzels and nuts.  If I am smart and keep re-filling my waters, I should be ok.

My neck had stopped hurting during my day of rest.  I had bought a bottle of Hydrogen Peroxide and was swishing it around my chipped tooth two and three times a day.  It had done the trick!

Sunday morning is a good time to travel by bike.  The traffic is lighter because many sleep in or sit in church pews.

I assembled my things and got them all packed on the bike and was riding by 5:30 in the dark.  I was glad I had packed my front light and a flashing back light because it was very dark when I departed Ellen's home. 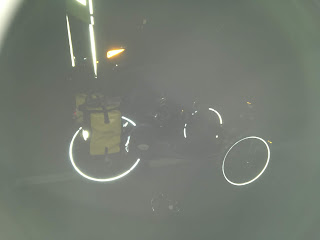 I took a different route to get back on the Pinellas trail, going down the sidewalk on Hwy 19 instead of the narrow shoulder on Alternate 19.  It worked well.  It helped that I had ridden this area several times because there are several dis-connected trails on Google called the Pinellas Trail.

As I rode the sky became a light blue-grey and I watched bats fluttering to fill their stomachs before returning to their roost to sleep the day away.

Sometimes when I stopped I posted on Facebook to let my friends know I was making progress toward home.  It was cool to have them cheering me on.  As I headed up the Sun Coast Trail I realized I was being pushed along by a nice tail wind.  YEAH!!

Shortly after I got on the trail two young men heading my way on their racing bikes must have touched wheels.  One went flying and crashing.  They were about 200 feet from me at the time.  I could see that the guy that crashed was in pain, and his buddy was ignoring that and trying to get him up off the ground.  When I arrived the guy on the ground was asking for an ambulance and his buddy was trying to talk him out of it.

I called 911 only, here is stupid me, not hearing anything and going hello? hello?  I hung up.  The 911 operator called me back and I still couldn't hear.  I then remembered I had been listening to a book on my phone with my earphones.  I had taken the earbuds from my ears as I was approaching the accident.  I unplugged the earphones and could hear the 911 operator.  We were about a mile north of the Starkey Park Trail intersection.

It was clear the guy on the ground (who was sitting up by then) was bleeding bright red blood from his mouth and had hit his head.  He told us he thought he had broken his jaw.

I left after the ambulance was on its way and a trail ranger had stopped to help. 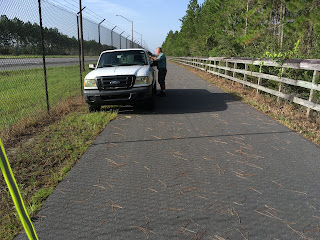 As I rode away I had two thoughts.

At Hwy 50 I turned toward Brooksville and stopped for refreshment. 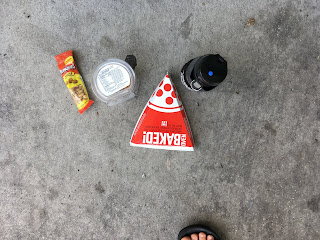 I was feeling good!  My friend, Robyn, who had helped me find a Sister on the Fly to stay with the last two nights, had messaged me that she could come get me if I ran out of steam.  It was so nice to have that option.  Maybe I would have felt awful without that option.

It was getting mighty hot in the sun, but I had made it to Brooksville around noon.  The Good Neighbor Trail and the Withlacoochee Trail were ahead of me and they both would have some shade. 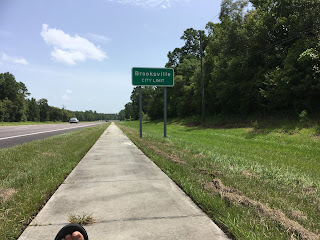 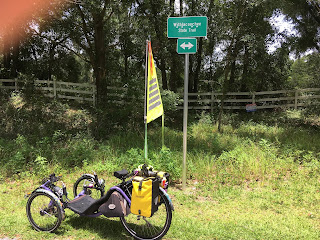 My legs were feeling good, it was just the heat that was becoming difficult.  I would stop in the shade, read some more encouraging posts on Facebook, and keep pedaling.  Wetting down my shirt at Townsend park I decided to go straight to downtown Inverness and visit the Ice Cream Doctor. 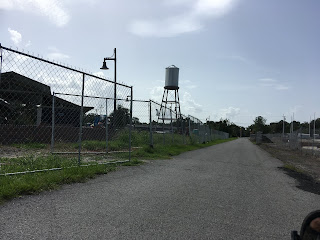 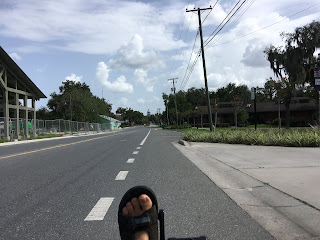 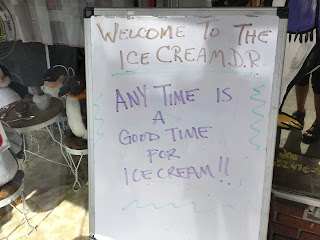 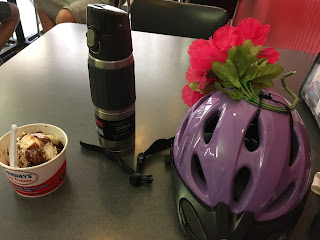 Thanks to everyone that followed my journey here and on Facebook and boosted me up with messages, emails, thoughts and prayers.  You ROCK!

So last night, here I was, exhausted, comfortably sitting on a balcony overlooking the beach.  Enjoying the sunset and sharing a picture on Facebook.   When I noticed that it hurt to swallow.

A pain above my Adam's apple.

Before I left I had started getting some pains in my neck and I suspected it was from a tooth that had chipped while I was in the Netherlands.  It was a back molar with a large filling and the whole side of the tooth had fallen off.

I have an appointment with my dentist set for the end of July.  I thought, since I had not felt pain, I was ok to wait a couple months to see the dentist about it.  Just before I left I tried to get in, but it was near the 4th of July and my dentist was off for the week.  I went to the walk in clinic and asked for antibiotics to combate the infection if I needed it on this trip. I got some and I am carrying them with me.  I don't want to take them.

We all have heard about the damage to the gut bacteria that can be caused by antibiotics.  My gut has been functioning well and I don't want to mess with it, thank you very much!

I don't know if you are like this, but a strange pain and I start to think of what it could be.  I am pretty sure it is the tooth, but still.  Once you have something happen like cancer or heart or any serious diagnosis it makes you realized that you are not immortal.  Bad stuff CAN happen even to us.

I took two Tylenol and went to bed hoping this morning the pain would be gone.  The good news is, it only hurts when I swallow.  The bad news is the pain is still there on top of an over-all tiredness.

I went too long yesterday, I think.  I am feeling not my normal positive self.  It has been 5 days in a row of biking.  As I bike I think of Dan Sheridan.  He is right now biking across the country with a group.  Into the wind and over mountains, in the cold and in the heat. 80 and 100 miles a day.  They go 5 and 6 days before they get a day off the bike.  I am a wimp.

FORTUNATELY,  my friend and fellow Sister on the Fly, Robyn, checked around for Sisters in the area that might be able to let me crash for a day or two.  A Sister on the Fly in Holiday, FL contacted me and offered me a bed on her porch!  Yeah!  And I had met her and her mom at the Sister's on the Fly event I attended in late June!  I am so grateful and glad to have a place to crash and folks with whom I can converse.


It was a slow hot ride, but I am close to her place now, in the Tarpon Springs Library.  I have bought a bottle of wine and some pretzels and hummus.  Ellen tells me she is having a friend over and they are all going out for fish and I am welcome to come along.  YEAH!

I am looking at where to go next.  I know I have wanted to ride to Polk City from Inverness.  Doing the Withlacoochee and the Van Fleet Trail in one day.  It doesn't excite me today.  I will chat with others and see.  Maybe tomorrow I will have my energy back.

*******
Ellen had offered to come get me and bring me to her house.  I will bike it, I insisted I would ride it.  A part of the ride was on Alternate 19.  For those of you who have never driven on 19 and Alternate 19, they are highly congested roads.  There is so much water around and they are the only through roads going north and south along the West coast in this area.  The big problem for bikers and walkers is they did not plan for pedestrians and bikes.  Fortunately on one side of Alt. 19 just north of the Sponge Docks in Tarpon Springs, they did include a sidewalk across the bridge.  On the south-bound side.  I was heading North.   I rode against traffic so I could see it coming and pull off the road when it appeared the vehicle was big or the driver wasn't paying attention.  Most bicycle-vehicle accidents happen when the biker is struck from behind by an in-attentive or impaired driver.

I made it to Ellen's,  Met her little dog, "Little Bit" and her big affectionate cat, "Stinky".  I arrived in time to avoid most of the rain.  What a wonderful oasis.

I am feeling like a need at least one day to rest and re-group. 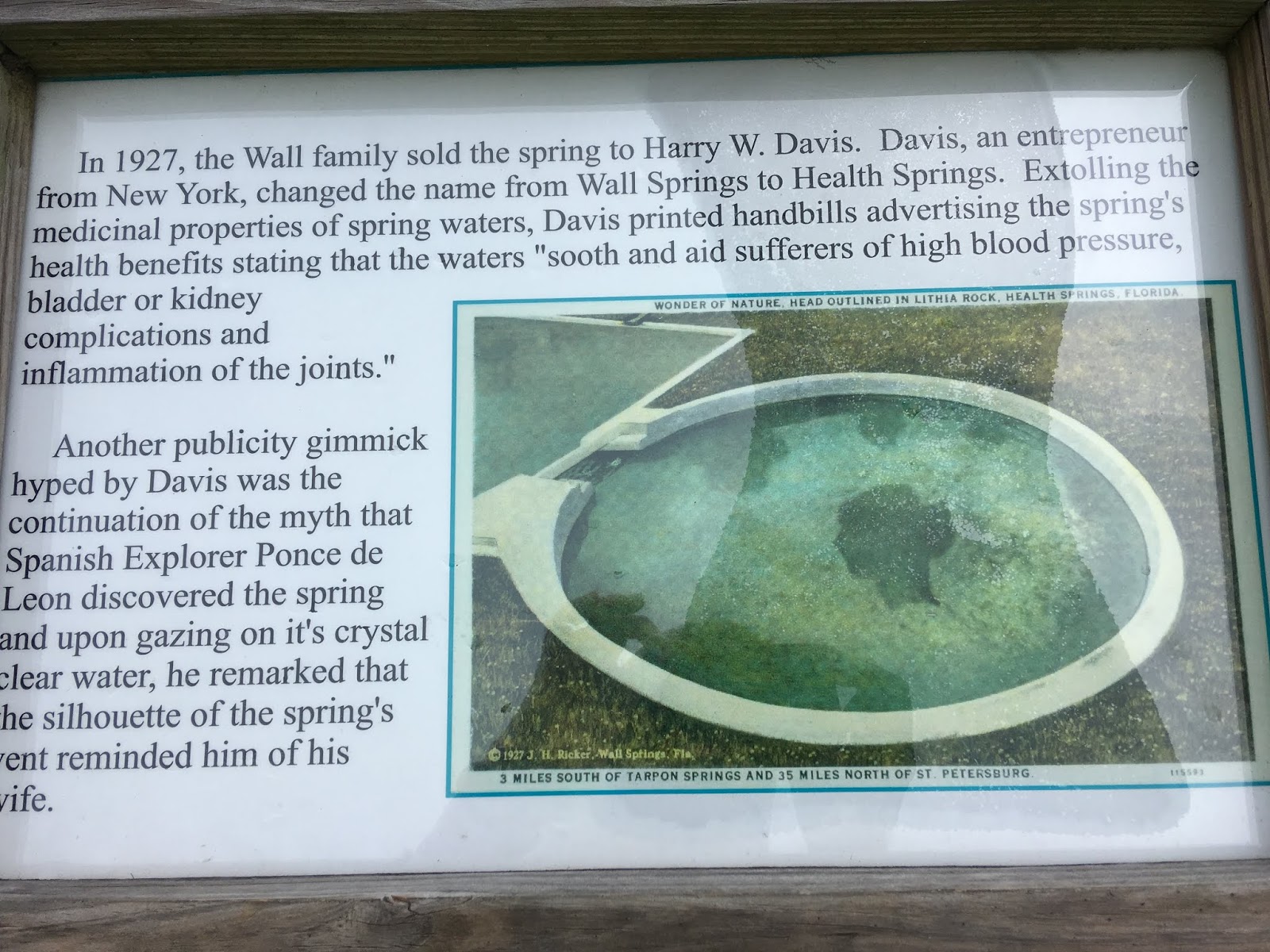 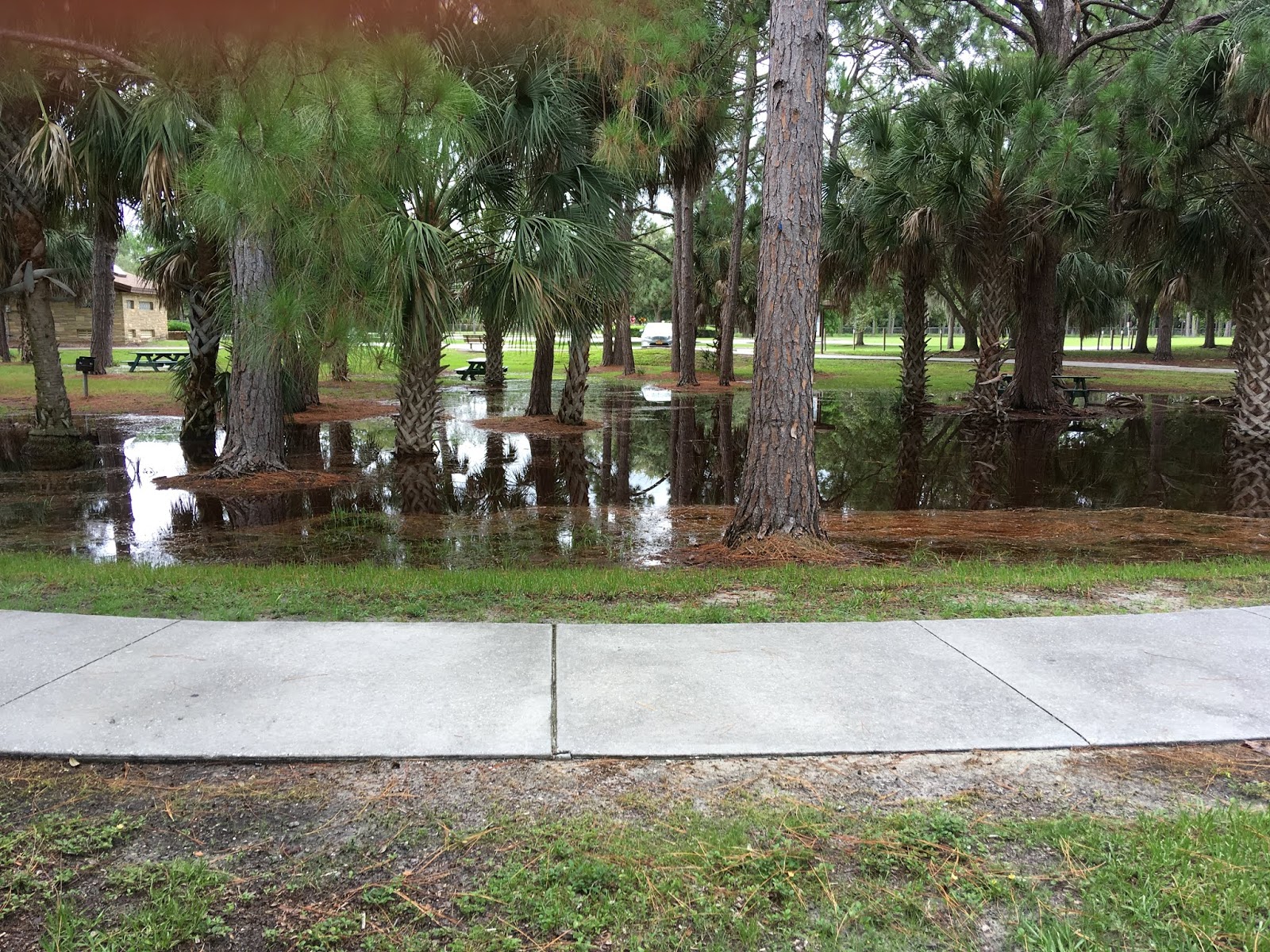 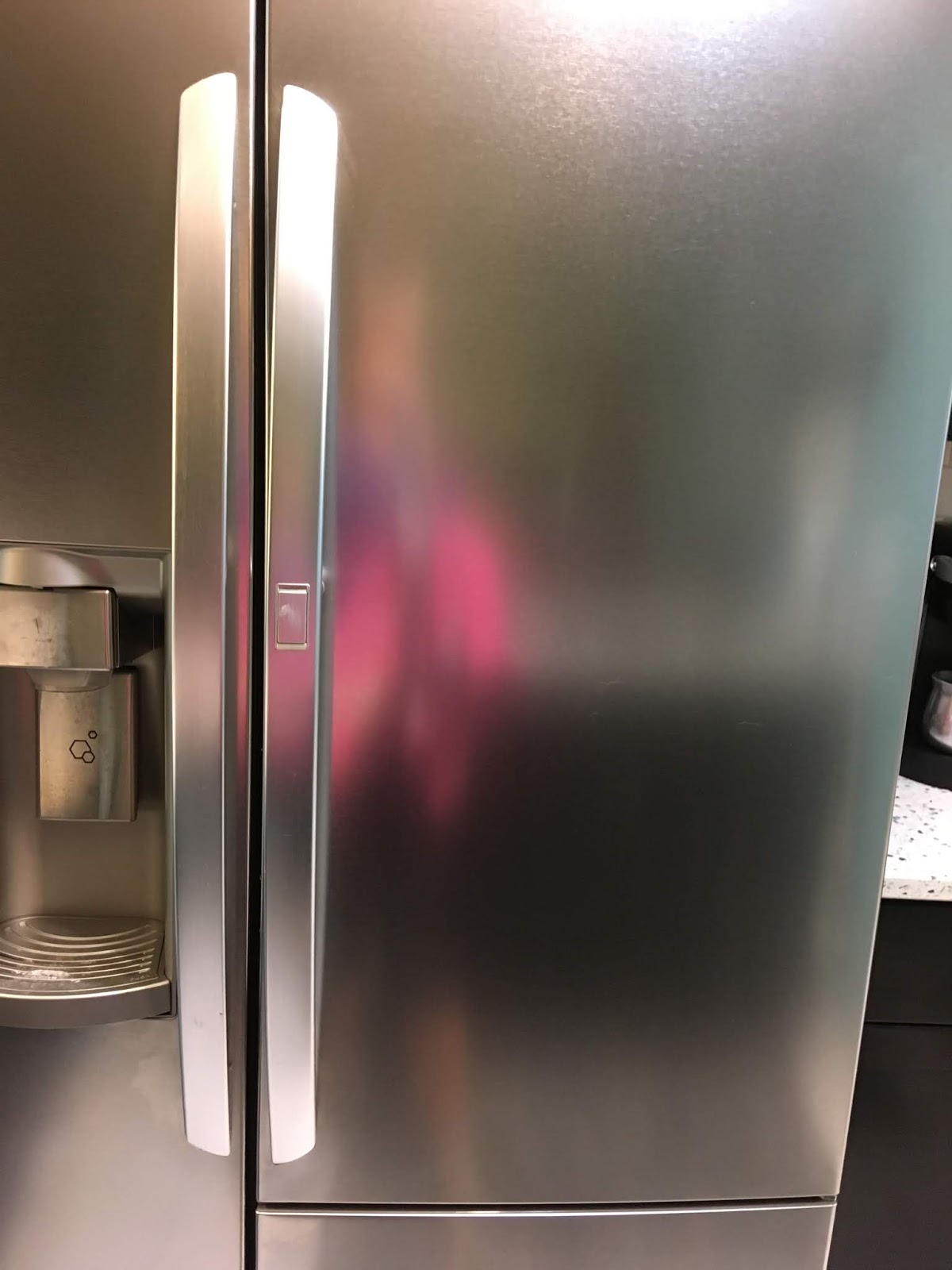 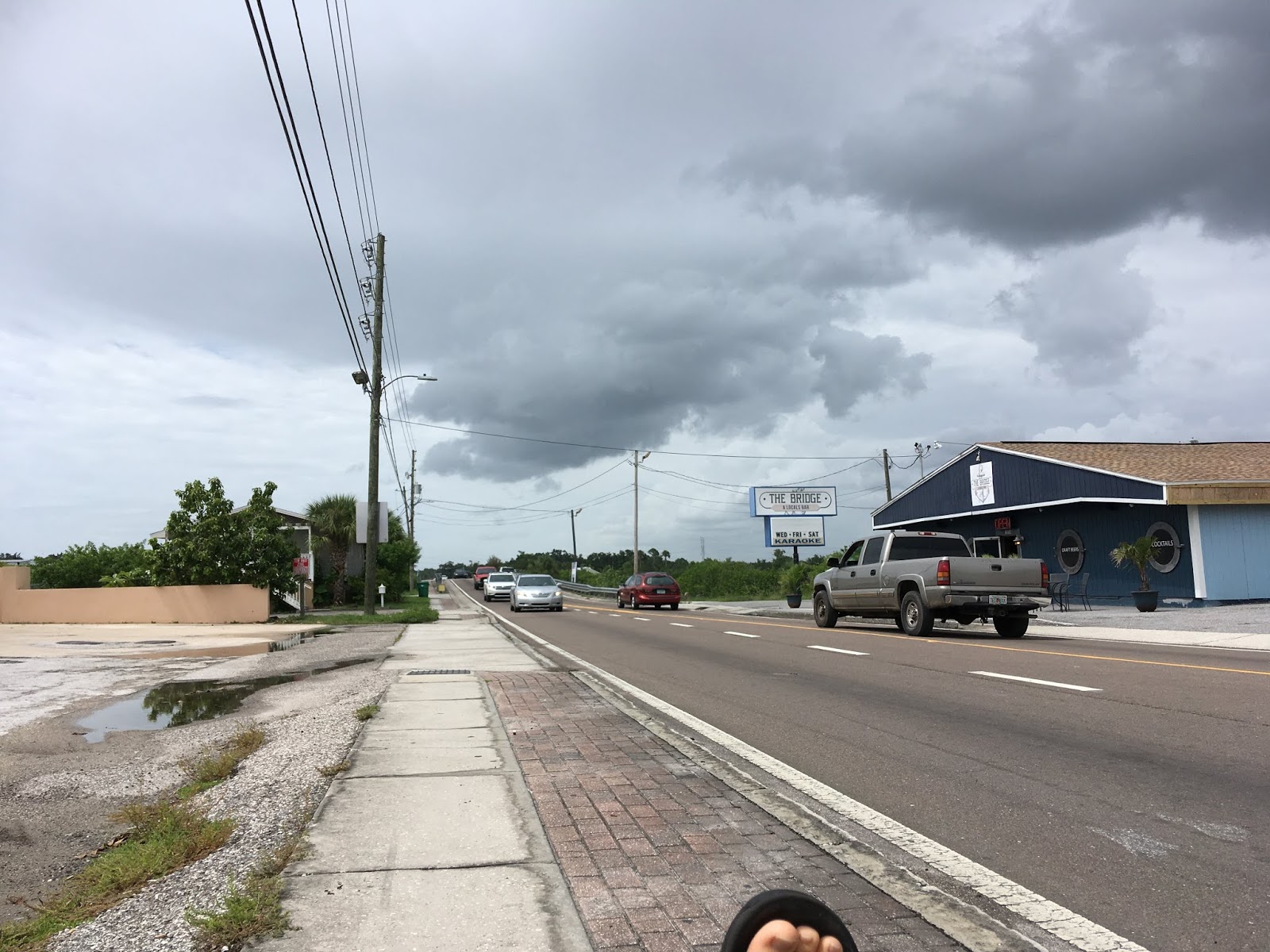 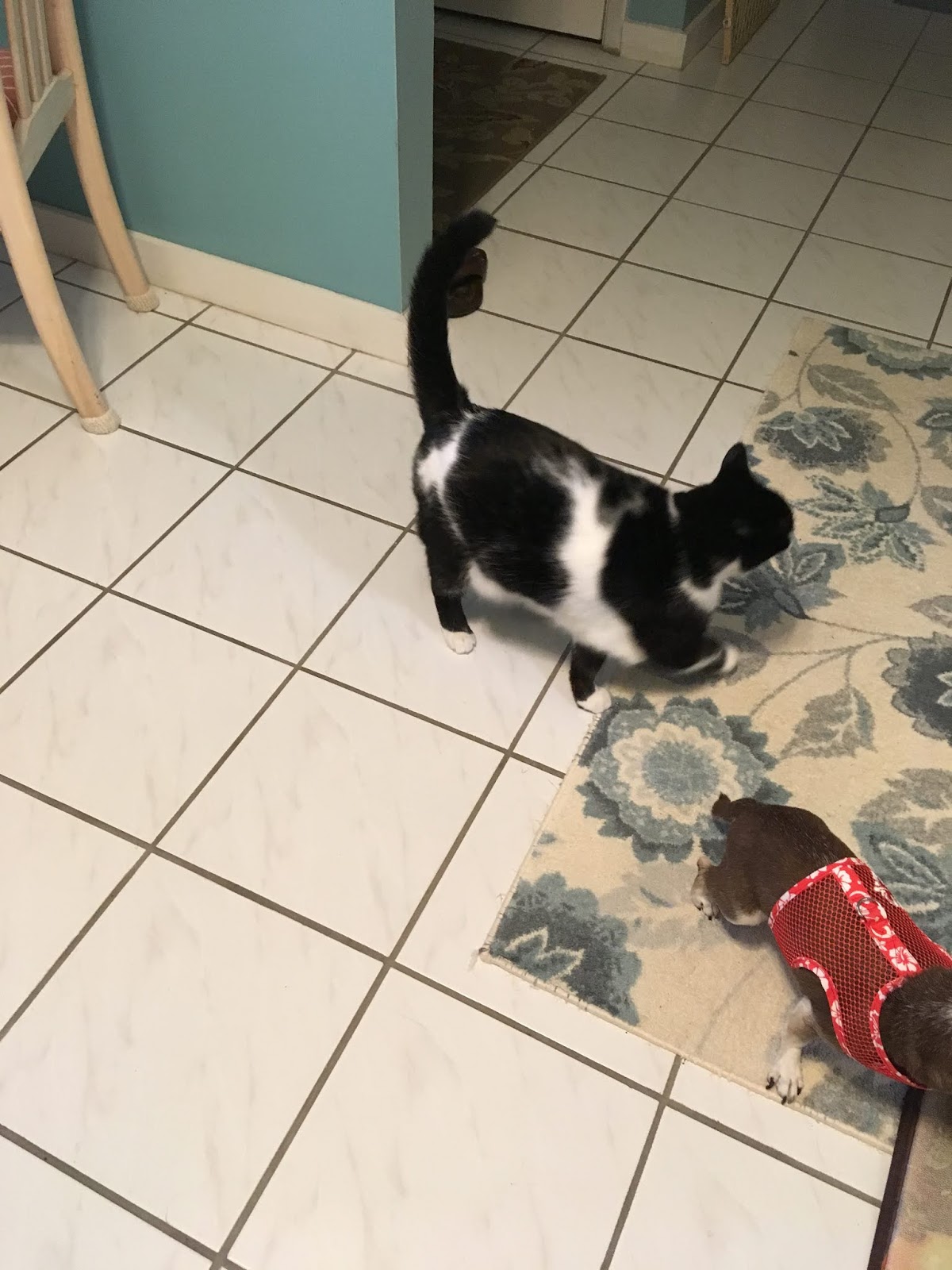 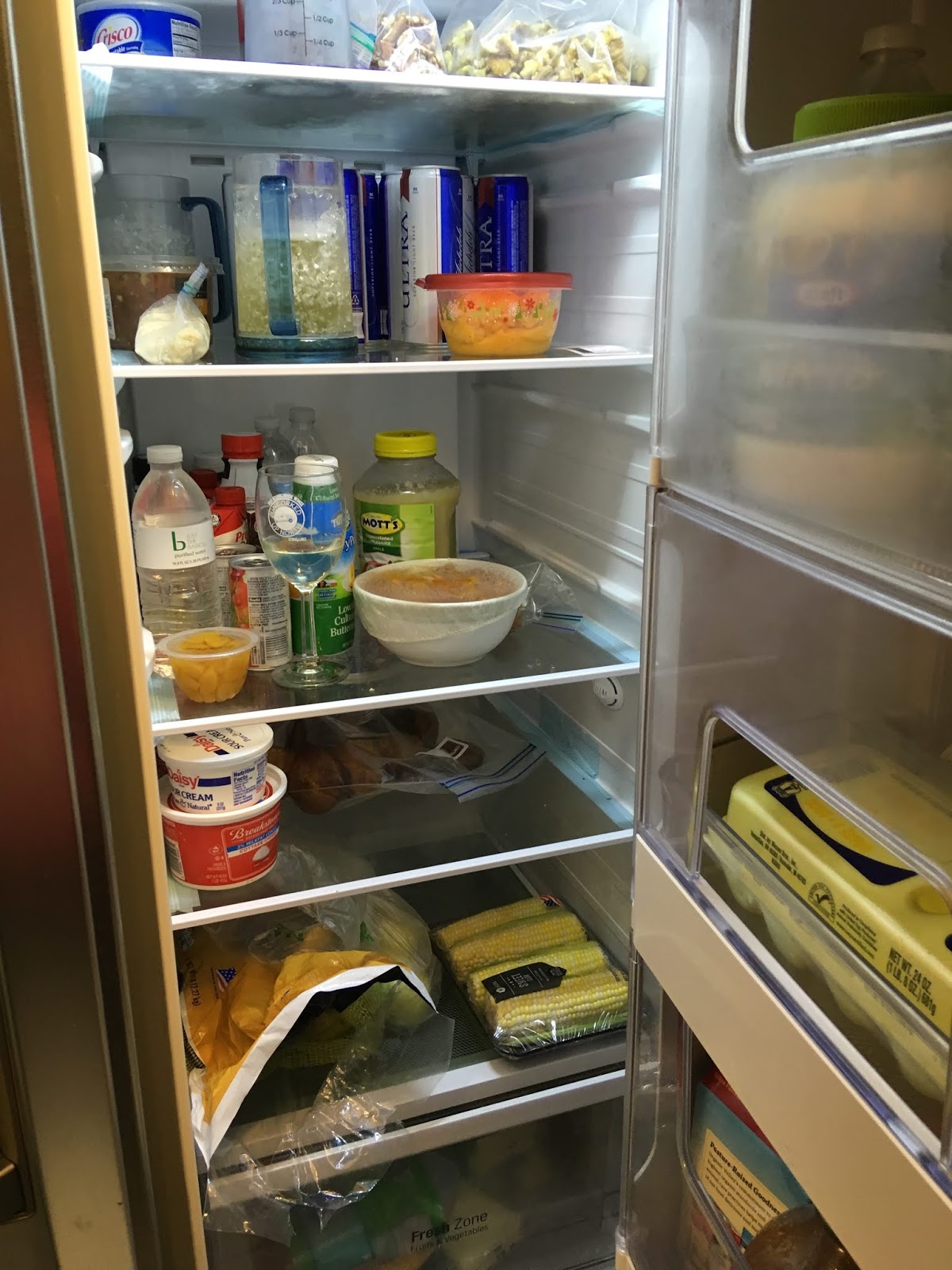 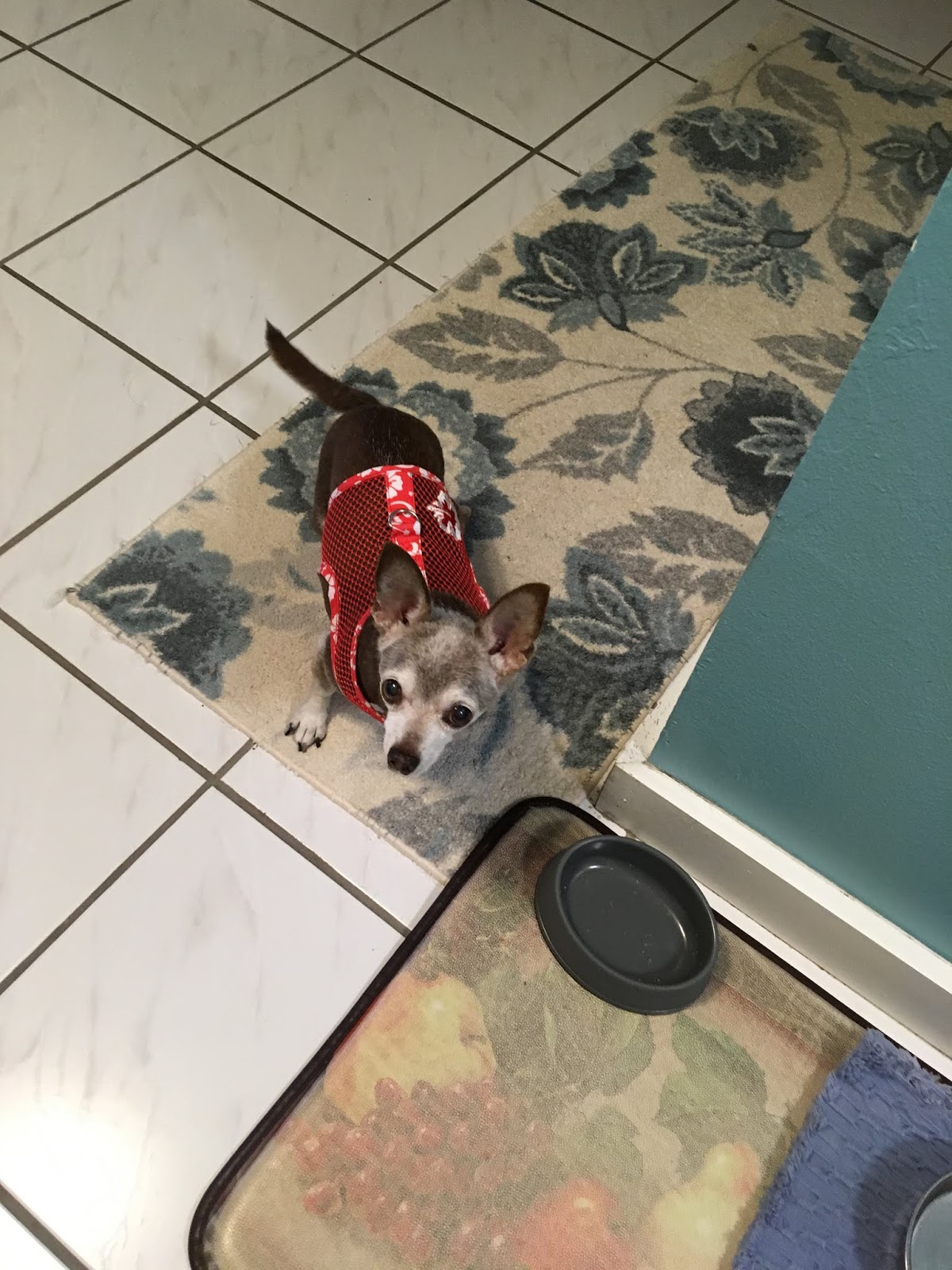 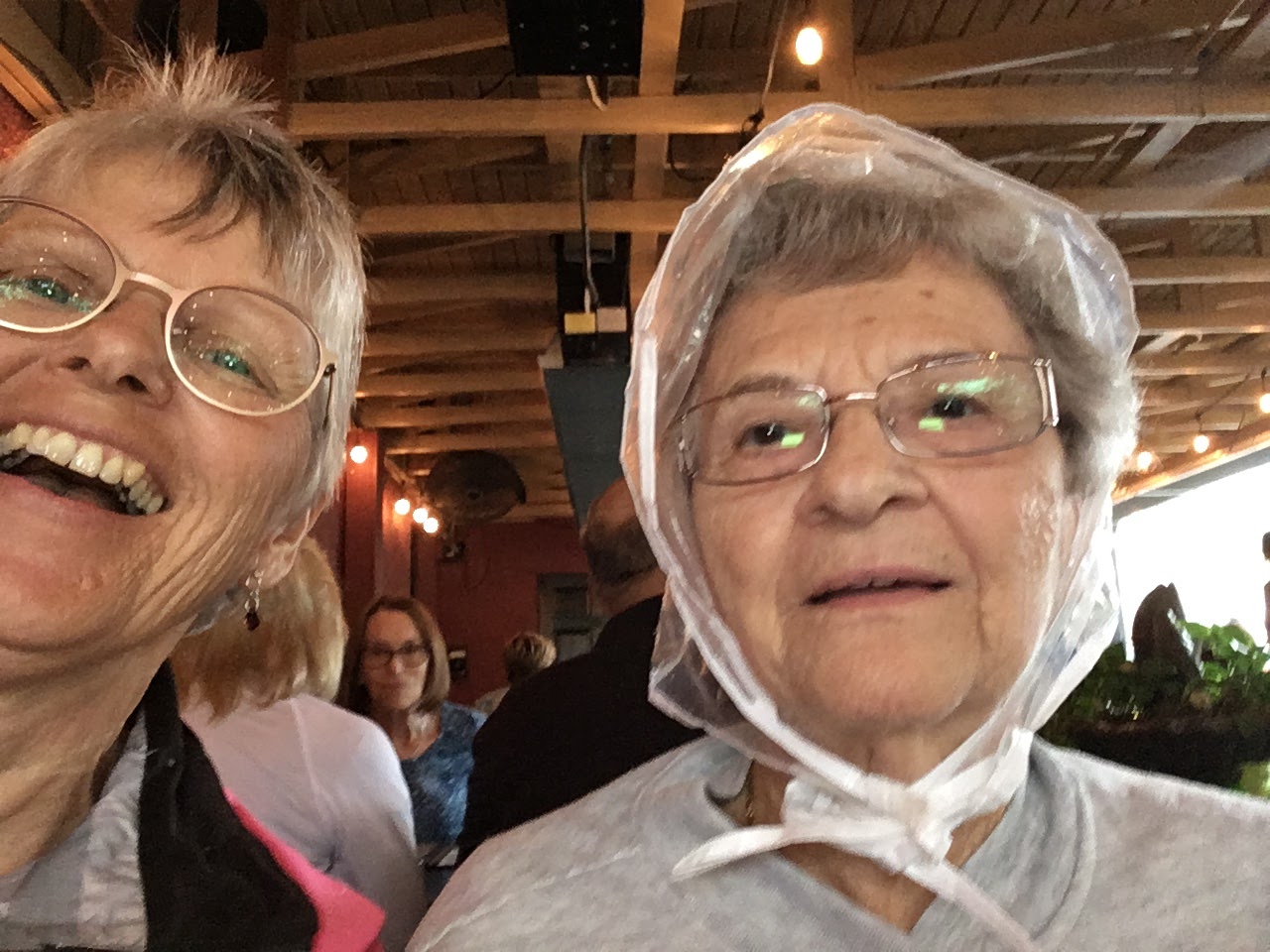 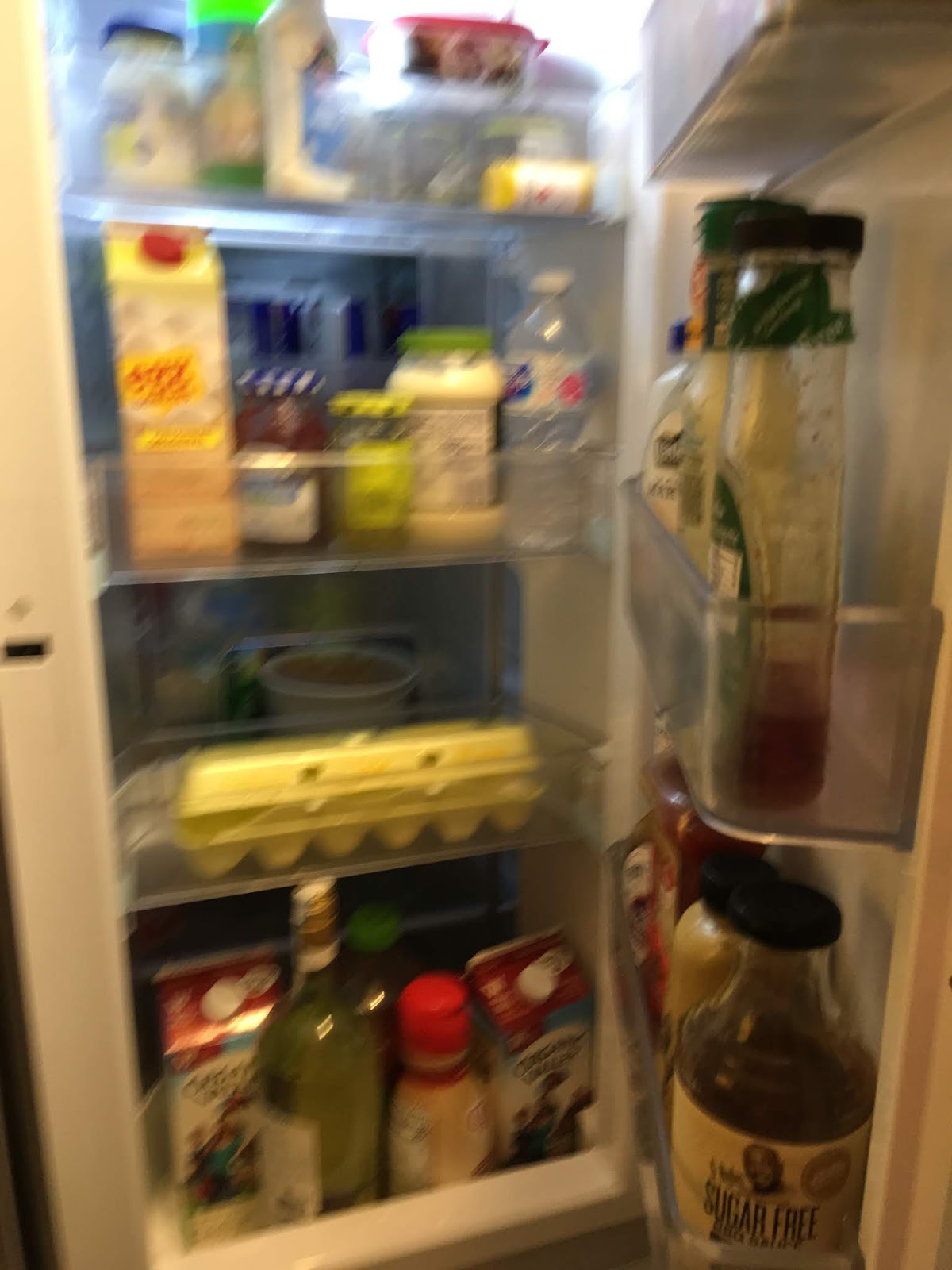 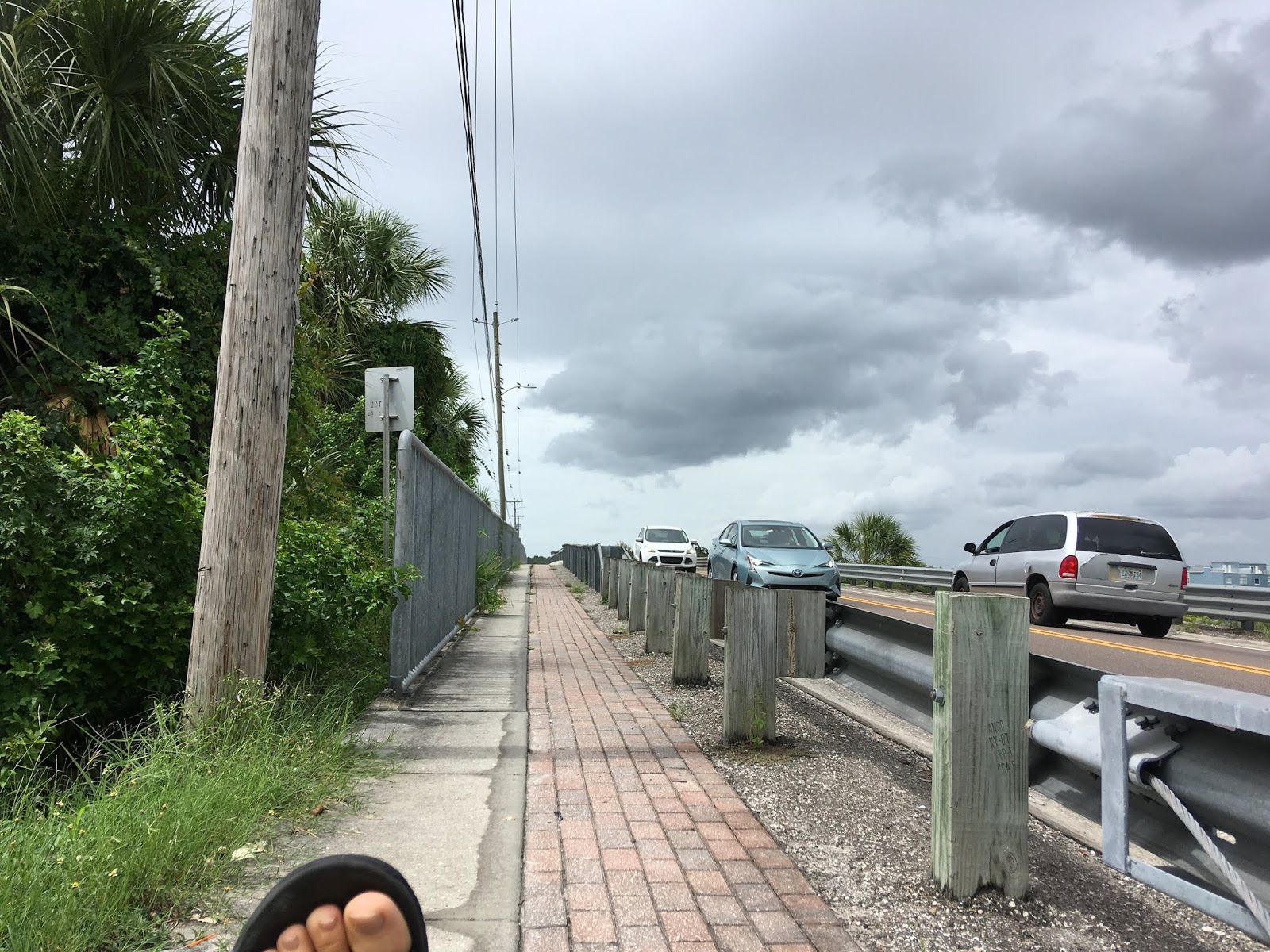