I made it! Not without misery…

The campground required online reservation and I only had one line of cell service so it took me  half hour to get registered.

While biking toward camp I was dreaming of food, a bicyclists fuel, and the last of my snacks and lunch had been devoured a couple hours ago.

I decided I would set up and then ride two miles down the road to get some supper.  But once I was in camp,  there was so much to do.  Then it was too late, I didn't want to ride the country road in the dark after eating.

I got to use my mini propane burner for the first time!  I was glad I had packed a back-packer's meal.  A packet of cajun beans and rice.  I added peanut butter and I my hunger was satisfied.

Right now I am writing to you as I am straddling my bike at the intersection of Hwy 2 and Hwy 64.  I was checking the map and saw I had two lines of cell service.  So I thought I would upload some pictures and let you know I am still alive and not laying on the side of the road somewhere. (The risk was real!)

Dogs have discovered I am here.  Though they are tied up, they are barking and baying.  I got to get moving … more later. 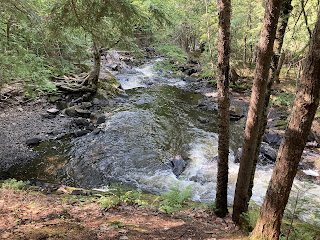 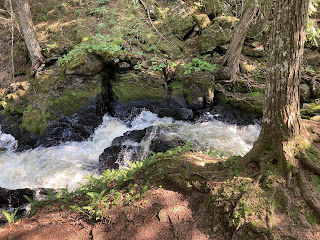 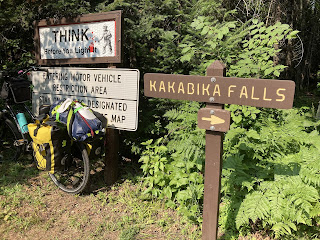 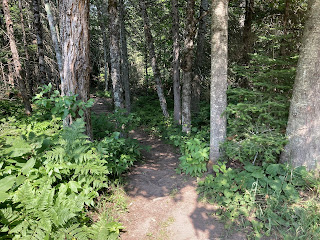 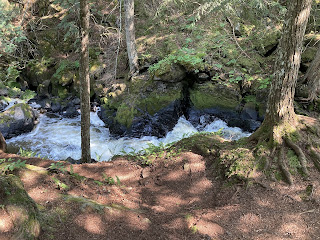 Ok,  I am in a safe place and have WiFi now for an hour or so.

Yesterday I left you when I was tired already from the ride and I discovered that the road Googlemaps was going to take me down was a private road and had a gated entrance.

I had to ride back the way I came and ride further up a highway to another road going north. When I came to a fork in the road I took the one that had new pavement and a shoulder because I remembered the guy that gave me directions told me the road I was on turned to gravel.

That choice probably added another 10 miles to my ride.  When I was at the entrance to Notre Dam I only had 17 miles to the waterfall. A few miles after the wrong turn I had 27.  That was after retracing my ride and going about six miles further down the road.  What I discovered is roads and services are scarce  this far north.

I passed into Michigan.  I had eaten my lunch and was hungry again.  I kept stopping to rest. 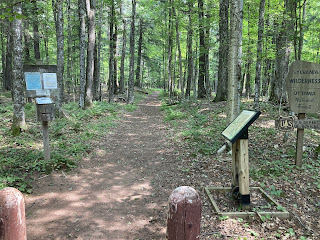 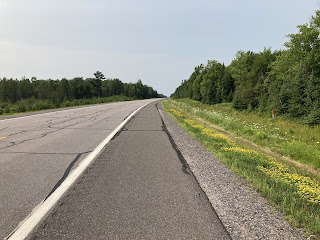 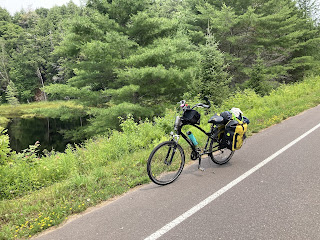 By the time I arrived at the falls it was 4:00.  My water was almost gone.  I have a water bottle with a good filter but I have not used it yet.  The waterfall water was warm, I decided to not use it.  I was hungry too.  My dreams of sitting by the falls for a while didn’t come to fruition.  I added my pee to the area, took pictures, and I hiked back to my bike.

After the falls I headed for Gogebic County Park near White City, MI.  I took a shortcut on a gravel road (Cutthrough Rd) and it occurred to me that I could slip and fall in some of the loose gravel spots.  I wondered how long it would be before someone discovered me.  No cars passed me in that road.  I was so exhausted.  My back hurt, my shoulders and wrists and hands hurt.  I was afraid I would make a mistake in handling the bicycle and fall.

I kept having to stop and stretch to keep from cramping.  An hour from the campground I drank the last of the water.  I passed a sludgy swamp and decided to tough it out instead of drink that, no mater how good the filter. 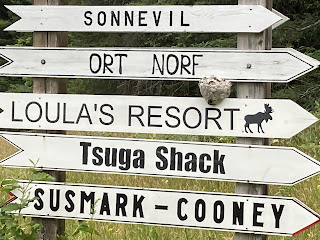 As I was pitching my tent I kept in mind that the weather wouldn't always be so pleasant. What would it be like if I was pitching and taking down in the rain?

People stopped by my campsite.  “Where are you headed?”

I answer that I don’t know.  They think that sounds great.  Me, I am just tired.

My first night in the tent and I didn’t sleep well even though I kept dreaming while I was riding of pitching my tent, sliding in right away, and sleeping soundly.

Here are some more pictures from yesterday. 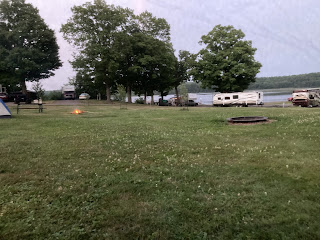 The view from my tent.

I washed out my shirt and bra at the spigot.  Only it won’t dry overnight.  I dipped into the water with my clothes on.  I had been riding on roads at the end with little shade and it was 86 degrees. 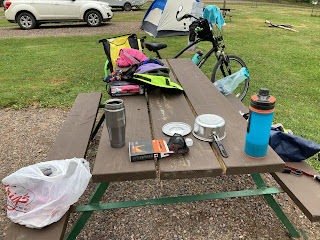 How does one pack and unpack and cook their meals in the rain? 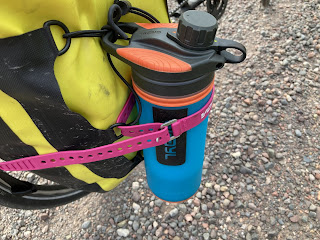 My expensive water filter I was afraid to use. 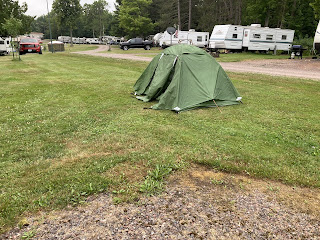 I went to bed as soon as the mosquitos started biting.  Dang!  The young couple next door invited me over to share their campsite.  Once inside the tent I tried to close the rain fly and many mosquitoes got into my tent.  All night I experienced buzz and bite and imagined bites.

More later, I have more riding to do today, and I still don't know where I am going!

Facebook is awful and it is wonderful.  Especially for a traveler like me that loves to connect with others and ride or just have a good con... 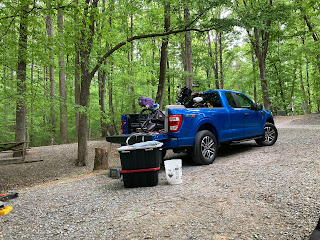