Greetings,  I hope this finds you well.
These pictures and stories are not in sequence as I am trying to figure out how to blog on my phone. 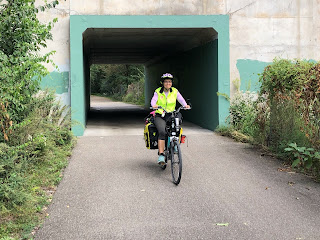 Joan stopped ahead of me and took this picture of me riding out of an underpass. 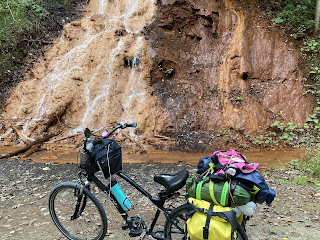 I passed a red smelly waterfall.  I hear there are several on the trail.  A reminder of the many abandoned iron and coal mines in the area.  This smells a little like sulfur, a sign says it is water from an old mine and is acidic and a major source of pollution. 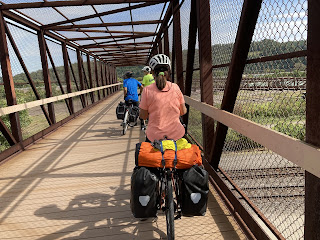 Joan is an experienced bike tourist as you can see by her neat pack.  She said keep your raincoat on top.

We stopped  at a cemetery and campground in Dravo where a soldier was buried from the war of 1812 and about nine from the civil war.

Is a consort a lady friend without a marriage certificate?  I have yet to google it. 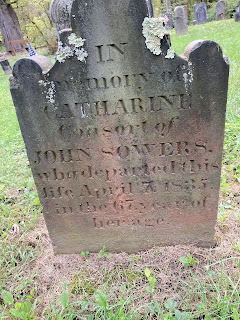 Once out of Pittsburgh ant it’s burbs, the trail became bluffs on one side and the river on the other. 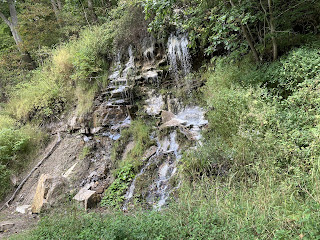 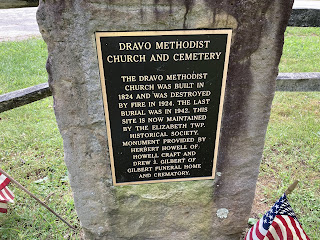 McKeesport was industrial but had a park on the trail with a nice statue of John F Kennedy.  We will have to google his connection to McKeesport. 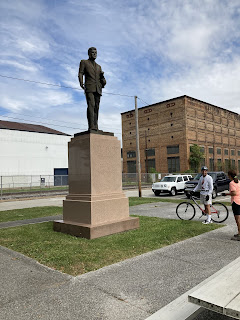 It is hard to believe our adventure started and we are into it.

Our first night we are in bike camper heaven at the Gap Trail Campground.  I pulled in well behind Joan and found we had a canopy under which to set up our tents, just as the rain started to fall. 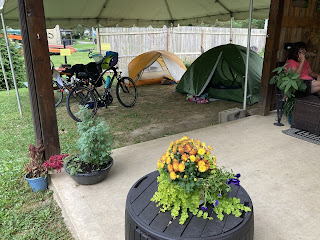 The Gap Trail Campground has a wooden shelter too for conversation and morning coffee is included! 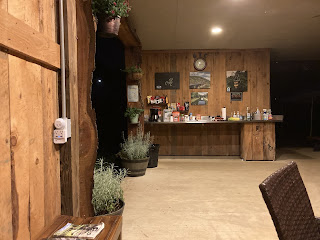 The bathroom and shower are sheltered and fancy yet kind of outside.  It is like a fancy B&B for $25 a night. 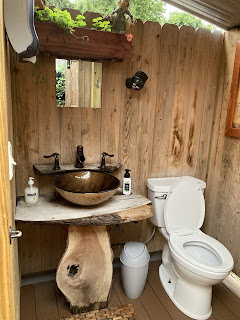 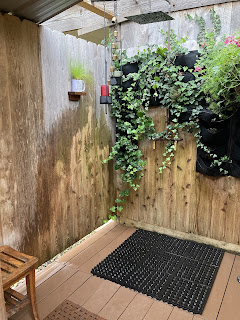 Here is the jump around.  Let me tell you how the day started now that you know how it ended.  Not that you care, but as long as you made it this far…

Tuesday 9/21/21, We woke up at five a.m. Joan wanted to start riding about eight.  I needed to finish getting the trailer ready for travel and for sitting empty for 10 days.

It was agonizing to throw away good condiments and frozen berries.  I wanted to walk around the campground offering it to other campers.  I did find a couple willing to take potatoes and a jar of freshly made soup.  The two foods I offered Joan she doesn’t do is soup and smoothies.

I pulled away around six  to our safe parking spot 1.5 hour toward Pittsburgh.  We rode to Pittsburgh from our parking spot and got a picture at mile zero for us.

0fFicially it is Mile 150 for the trail that starts in Cumberland, MD. 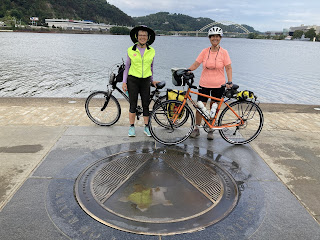 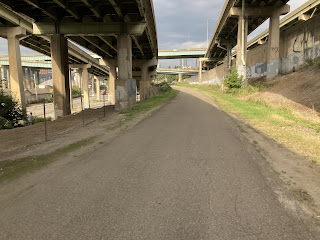 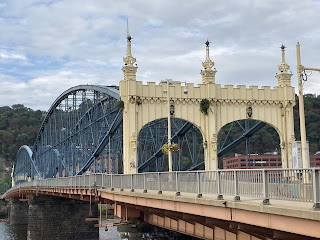 We returned to our vehicles near the trail and loaded up
Our tents and panniers. 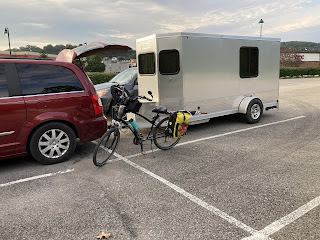 Joan and I are adjusting to each other’s communication style.  We finally figured out we were both hungry and stopped at a place for lunch at about 1:30.

After lunch I sagged behind and Joan zipped ahead.

The owner and a friend/helper stayed and chatted with us after we set up.  Local restaurant s often deliver so we stayed in camp and ordered food from just down the street.

One other camper, Milton who works for the Navy and is heading toward Pittsburgh, came and set up camp.  He has decided to stay an extra day.

My first night in the tent, I missed my big pillows.  I am glad I bought a pint of brandy to help me sleep. I only took a few small sips. It helped a bit. 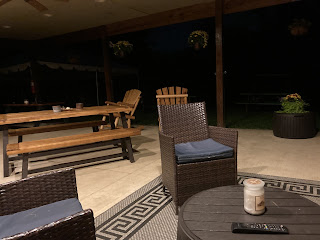 This morning Joan said “we have to talk.”  She said it is going to rain and thunderstorms are scattered.  She asked if we should stay one more night.  It would let the C&O dry out after the rain a bit more before we get there.  The C&O is notorious for becoming a muddy mess after a rain and flooding in some areas.

I am anxious to get going and to save our extra day for later when we are tired…when I am tired, I should say.

But where along the way will we have such luxury at $25 a night and in walking distance to stores.

So we keep winding our thoughts around the idea.  For now we are staying as the weather report continues to change.