Before I left Florida I got a bit ambitious.  I hired a great voice actress to read Alzheimer's Trippin' with George and create an audio book from it.

She had found a few mistakes in my writing (surprise, surprise).  I had to remove all the pictures from the book (over 1200!) to make the audio version.  Where the picture added to the story, I had to describe the picture or what was going on.

Anyway, she was kind enough to make notes of the errors and I will be able to go back and fix the paperback and Kindle versions when I get the time.

After that I decided to pay someone to professionally edit The Journey Continues.  Only they are editing the audio book version of that also.  That book is already up on Amazon in paperback but will officially launch in Kindle and Large Print on December 4th, 2019.   I hope to have the audio book version ready at the same time.

First the audio book was completed and is ready for my review.

So I need to sit at the computer and listen to that carefully for any corrections I would like the audio producer/actress to make.  That takes my time.

The good news is that Robin Siegerman, the voice actress, has done an exceptional job!  I am already in chapter 7 and I have found only one word for which she needs to change the pronunciation.

Next the editor of The Journey Continues sent me his corrections.  I am to go through the whole book correction by correction and accept or make comments on each correction he made or question he has.  Wow.  That take more of my time!

I didn't think of how much work would be coming to me while I was traveling.  I think I will space it all out.  A couple hours a day, and the rest I can enjoy with my sister, friends and family.

Which means I will blog less often.   I will miss you.

Soon the audio version of The Journey Continues will arrive for me to edit.  I may need to put off the release of that until January.  We'll see how things go.

I left you in my last post contemplating how I would get around or through Chicago.  Well, I plowed on through.

You don't think of this, but before you enter a big city, stop and empty your bladder.  That way you don't have to try to pull off into some unknown neighborhood looking for a place to pee.

I didn't have to do that, but I sure was anxious to get out on the other side of the city. 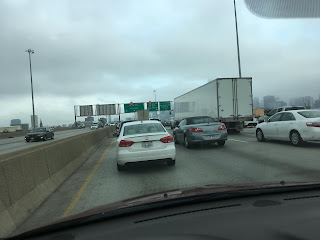 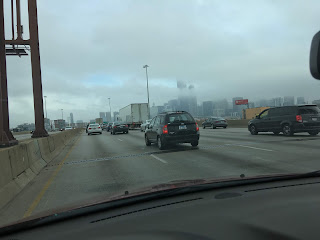 I was driving north up Highway 41 in Wisconsin when I suddenly remembered I had an extra stop today.  I was carrying a big picture that I was to deliver to a former employee that now works at John Deere in Horicon, Wisconsin.  I took the next exit and pulled over to see if I had passed Horicon.  I was exactly East of it.  Not bad for remembering just in time.

Instead for trying to find his number and calling him right then, I drove to Horicon, parked, and went to the security building.

The guard called John (the former employee) and he didn't answer.  The guard would not let me leave the big picture with him.  He was not allowed to keep packages.  I called John and left a message, then I walked around town a bit. 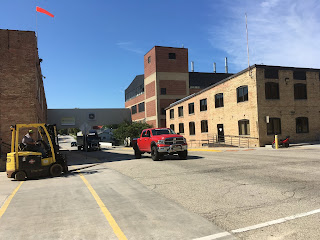 I was anxious to see my friend in Neshkoro, Wisconsin.  So I left and drove some beautiful roads through northern farmland scattered with woods and wetlands.

John called when I was over 20 miles from Horicon.  I said I would drop the picture off on my way back South.  (I hope I remember!)

My friend Audrey was having a neighbor couple over for dinner and graciously allowed me to join in the fun.  I stopped at a Piggly Wiggly grocery store for salad supplies and made my salad contribution to the dinner.  I made the salad like a person living out of their van - right there in the parking lot. 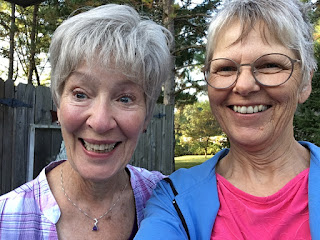 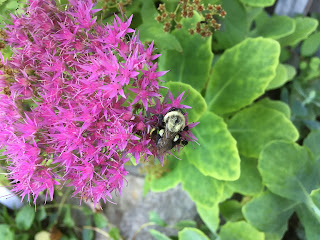 It was a great dinner, the neighbors took us on a pontoon boat ride around the lake they live on. 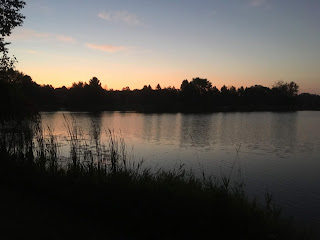 In the morning of 9/18/2019, Audrey and I were able to walk and talk.  She shared some pictures and memories she had of her late husband.  She lost her husband to dementia shortly after my George passed.  We are sisters in care-giving, grief, and moving forward. 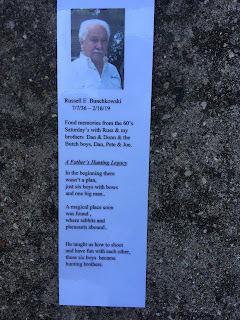 We were both early risers and I was back on the road again by 8:30, heading toward my sister's in Rhinelander, Wisconsin.