The thing about waiting a few days before I post is I forget what I did since I last posted.  If it weren't for all the pictures, it would all be lost to time.

I left you abruptly at the last post because I was posting from  the Coffee Hub in Xenia.  A staff member walked around and told those of us that were still lingering in conversations and on our computers that the cafe was closing in five minutes.
I rushed to publish my post without review for grammar and spelling.  I see it turned out worse that usual.  Oh, get over it, I am traveling.  I will go back and edit later... or not. time will tell.

I thought about going to get supper since it was almost supper time when the cafe closed.  I was tempted to get a beer at a pub that Chris and Adrian had told me about.  They said it wasn’t the kind of place where a woman alone was a signal of any kind.  Instead I went to the grocery store.

I went to the grocery store to get supper.  I didn’t want to have any leftovers that would need cooling or I would have to buy more ice for the cooler.

At the deli I got green beans and pico de gallo  and popcorn.  Ok, not exactly a healthy salad, but I had some veggies!  I dumped some of the popcorn in the tomato mixture and ate it with spoon.  And finished it off with left-over cookies from the morning ride I found in my bike bag.

After I ate I started packing up.  I was just going to pack the tent but then I packed everything but my chair and the tent-cot.  I put the rain fly on the tent-cot.  On second thought, I pulled one end off to allow for more ventilation.  It was still warm in the tent.

Since I have moved on away from Xenia, I can now tell you where I was staying. 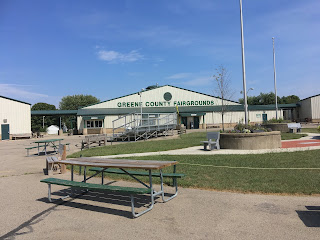 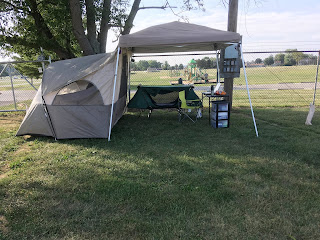 I was at the Green County Fairgrounds on Fairgrounds Road in Xenia.  There must be 50 or more camping spots with water and electric (no sewer connections or dump for trailers).

I was the only one there for four nights.  I was all by my lonesome at night, by the fence.  In one of the few shady spots.

On the other side of the fence is a playground and a shelter.  When I first set up camp there I was worried that people with thumping music would come hang out late at night drinking and yelling.  Maybe they would even come over to the fence and hassle me.

There are about seven or more huge buildings on the grounds.  Staff were working on maintenance or setting up for a flea market that was happening over the weekend.  When I arrived, I didn’t know where to go to check in or to pay.  I finally found someone on day two to ask and was directed to the office.  When I went to the office the staff said they would catch me later.

I thought, “Uhhh, I am gone almost all the time during the day, catching me won’t be easy.”
On day four, as I was starting to take stuff down in preparation for leaving the next morning, the staff person drove up in his golf cart.  He charged $100 for four nights.

Each night families with children would show up at the playground on the other side of the fence from me.  The children would run around and play on the playground.   The parents would patiently round up their crew after the sun set and drive away.  After that, all was quiet.

It is only about 200 miles from Xenia to my friends home in La Porte, Indiana.  Still it took me all day, with a short stop at a cemetery to walk.  It was a Catholic cemetery with lots of polish names and Mother Mary statues. 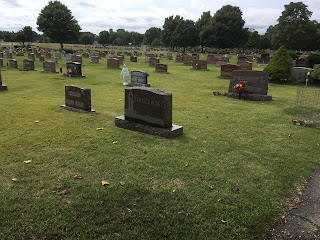 Once I arrived at Frankies and got my hugs we sat outside sipping beer and watching the humming birds zip to and from the feeder. 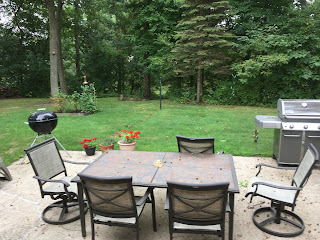 I told them that seeing them made me realize that traveling is really about the people I see.  Reconnecting with friends and making new friends.  It is so good to see them.  They always make me laugh.

They were going to a sing-along gathering and asked me to join them.  I was thrilled to have something new-to-me to do.  It sounded like fun.

Ok, so all the pictures I took of us don't want to sit upright... 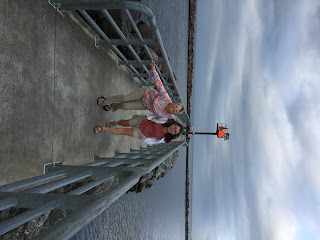 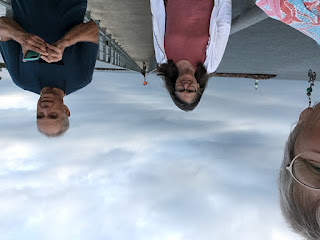 On the way to the sing-along we stopped at the Michigan Shore near a steel mill.  The road nearby is lined with lots and lots of different kinds of electric/telephone poles.   A very industrial view, it seemed strange that this is where there is a national lake shore, but when we arrived it was tall grasses, and the  grey of the huge great lake.

It was a lovely and fun stop.  It was only about 10 minutes, but just enough to get the feel of it.  Thanks Dennis for making the stop for me.

We arrived at the home of the sing-along hosts, Dan and Jean.  Almost all the other guests were there already.  I went around shaking hands and getting names.  I surprised myself by remembering names!  Whoo hoo!

Dan and Steve told the story of finding each other.  They are half-brothers.  Dan was adopted and a few years ago had a DNA test.  He found Steve who was raised 10 years by their mutual father who was a sales man.  Anyway, it was a fun story.  I found it interesting that they both loved music.  Steve played in a band for many years. 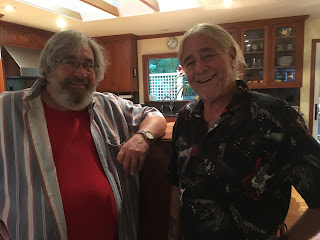 They have known each other for almost two years now.


Dan likes to cook.  They have a huge island in their kitchen with a  butcher-block top.  And a convenient waste can for wiping crumbs and scraps off the counter.  Dan made some great pizza’s and the rest of the guests had brought stuff to go with it. 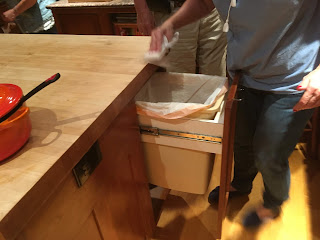 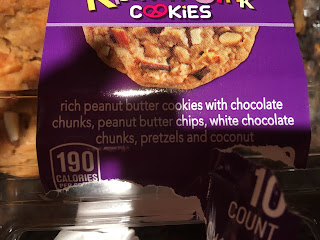 After we ate, we retired to the basement to sing songs. 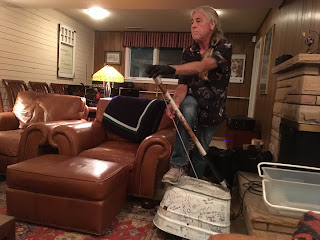 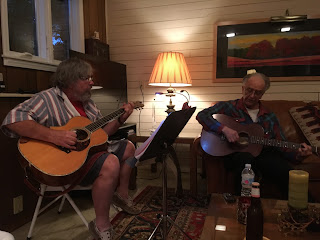 I wish I would have taken a picture of the song books.  They were thick.  Dan and Jean had put them together over many years.

There were Dylan songs, Spirituals, Beatles songs, folks songs.  We sat in a circle and each person chose a song from the book and we all sang together.

What a fun tradition.  Before I left I gave my contact information out to Jean and invited them down to visit.  “We can do a sing-along in Florida,” I said.  “But the acoustics in my living area are not as good as your basement.”

Wouldn’t it be fun if they visited while Frankie and Dennis are down in Florida?  Frankie and Dennis rent a home each year near the Withlacoochee Trail in Florida during the winter months.  It is so much fun to have them around to share in music events, dinners, and bike rides.

Tomorrow we are going to go on a ride about 50 minutes drive from here.  The road, Dennis tells me, is covered with a fine dust.  It turns out to be pulverized horse manure from all the Amish traveling with their horses on those roads.  It is pretty messy after a rain, he says.  We are hoping it won't rain.