Is it natures eye candy?

Wow, what a lovely drive today.

Thanks for making coffee for me, Cindy.  I enjoyed it so much.

We had moved my tent-cot under the shelter of the awning  on my hosts' trailer to see if the dew would not leave it so wet in the morning.  And it worked!  It was dry and I could pack it up right way.

I left the Cradle of Forestry before 7:30 and turned right though it felt so wrong.  Cindy said right was North and right was right.  So I went right and pretty soon I saw a sign saying I was on 276 North.  She was correct and my directional compass, that used to be flawless had failed me again.

Hwy 276 took me down the mountain and back up and down and winding through the forests.  In Waynesville (not Waynes World, but that comes to mind) I turned right on business 23 and then turned onto Hwy 209.  That is when the fun really kicked in.

No traffic pushing me or pulling me.  I kept looking for places to pull off the narrow road so I could take pictures and soak it in. 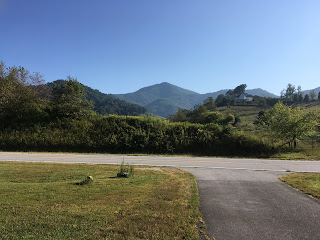 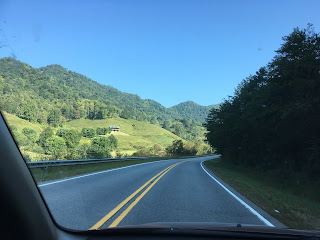 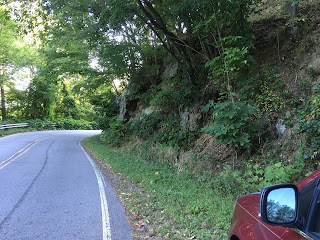 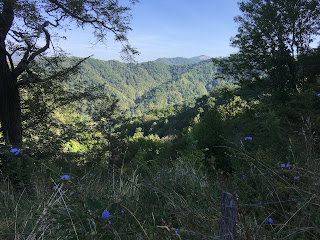 This early part of fall when the fall wild flowers are blooming and the grasses and vines are changing color is the most beautiful, to me.  It was in the low 70's in the morning and everything about the drive was perfect. 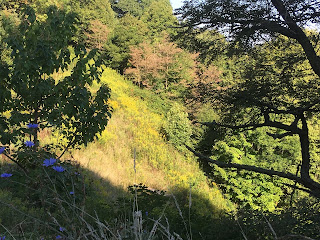 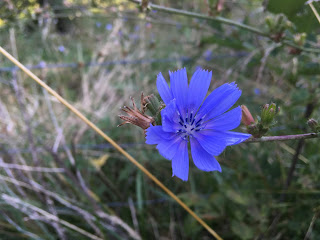 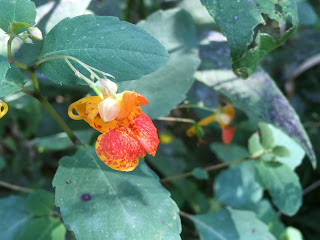 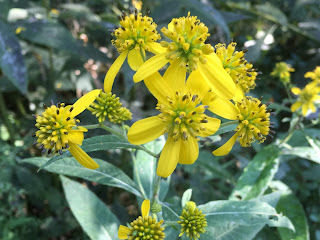 I was taking the pictures of wildflowers above and a couple guys in a truck slowed to a stop and rolled down their window.

"I am just taking pictures," I tell them, "It is so beautiful here."

"Your gas lid is open, I thought you ran out of gas," the driver said.

Nice country folk making sure I was ok. 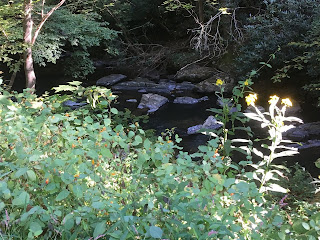 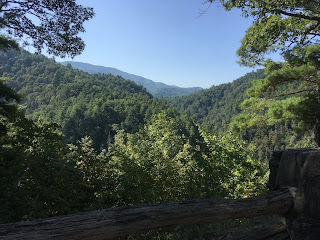 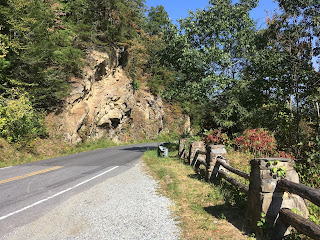 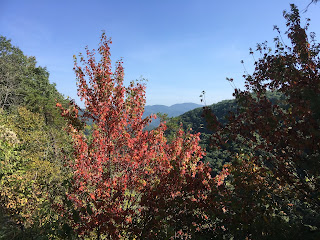 209 took me into Hot Springs where this lovely ride ended.  I stopped in the tourist center and took a picture to show the squiggly line of that road.  Yes, it is one of the motorcycle/sports car roads.  I am glad I did it early in the morning, when the light was grand, and I wasn't chased down by motorcycles. 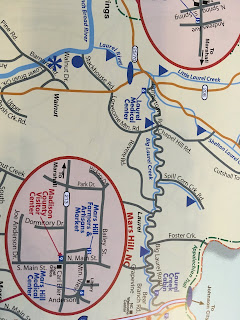 Hot Springs is a town right on the Appalachian Trail.  Where I stood to take this picture was right on the trail through town.  I saw a young man taking big strides, smiling big, no back pack.  He must have been happy to be in town after a shower and walking without his gear.  That is the story I made up anyway. 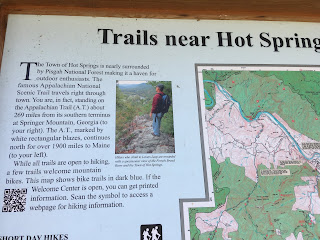 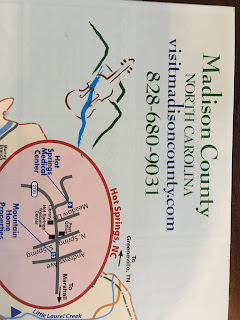 The route I was following to Daniel Boone Forest for a camp site was called Hwy 32 on my phone and Hwy 25E on my Garmin.  It became a four-lane hwy.  It moved faster, but the thrill and freedom I felt on 209 was not there.

There was a couple places I stopped to check things out.  A boat ramp, a veterans overlook and at Lincoln Memorial College (or University). 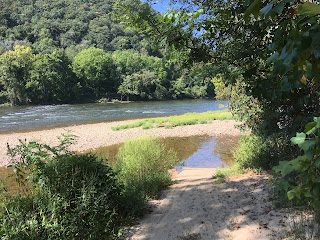 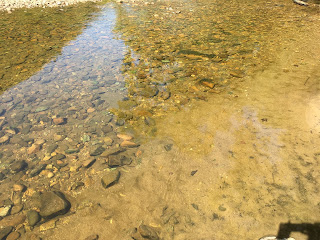 Oh, and I stopped somewhere for coffee and ended up getting a greasy mushroom and cheese grilled sandwich. 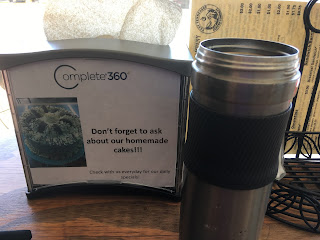 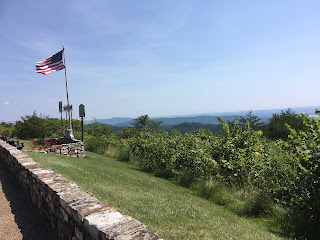 It appeared the Lincoln Memorial College was adjacent or had as part of it a museum.  The museum was being renovated, and it looked like the log cabins were getting new plaster between the logs. 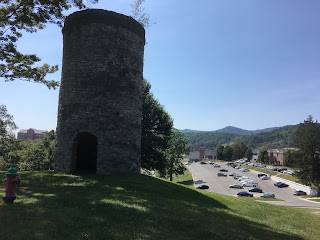 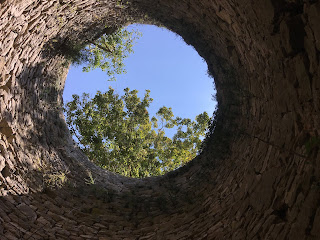 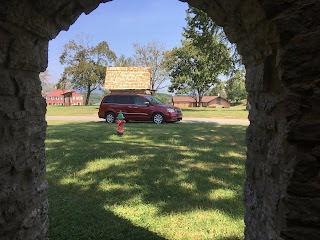 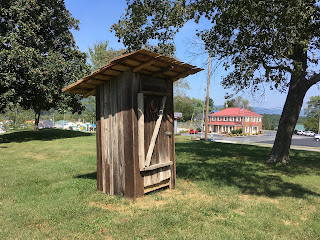 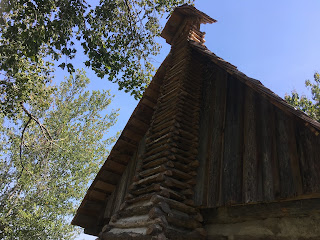 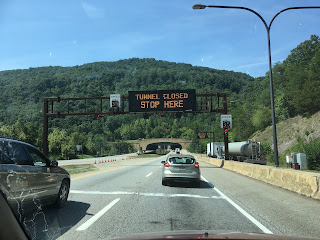 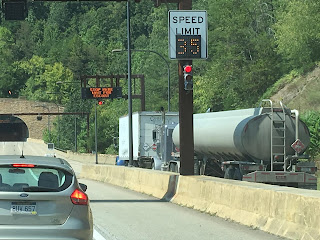 Just on the other side of the tunnel was a Daniel Boone Museum.  I went in and watched the movie... well part of it.  It drags on.   Boone lost two sons to Native American attacks while working his way through the gap in the mountains.  This gap had been fought over for many years among the Natives. 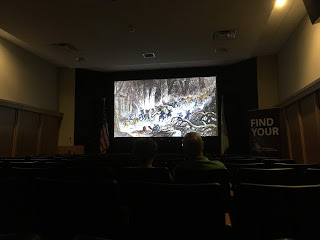 The thermometer read 100 degrees.  I was tired already and decided to stay in a motel.  I was in my room by 5:00.  Just one person and look at all the STUFF!!!   Computer stuff, clothes stuff, and food stuff. 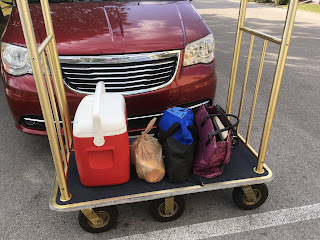 
I slept well.  Now I wonder... Do I go on to Cincinnati as I originally planned?

I have an Affordable Travel Club hostess waiting for my arrival.  From Cincinnati I was going to do the Southern part of the Little Miami Trail.  But it turns out I am riding with other trikers tomorrow from Xenia.

The idea of being able to set up camp and just be in one place for a few days is very appealing.  And if I take the highway (I75) it is only 230 miles or so to get to my next camping spot where I will stay for several days and ride the trails.

I am excited to be meeting up with some fellow tricycle riders there.  I joined their facebook page and have been conversing.  A few are coming to ride with me on Friday.  Some of them are well-known in the small world of triking and recumbent bikes.  Larry Varney of Bent Rider Online and Gary Solomon of the Laid Back Bike Report have said they will come ride with me tomorrow.

And then, guess what!  On the 14th, Xenia is having a CHOCOLATE ride to raise funds for their downtown improvements.

I am so looking forward to being with other trikers, riding the great trails, and being in one place for a few days.

Until later... enjoy your moments.