Hello Readers of this-here journal!
Thank you for being here… there… along for the ride.

Earlier today, both of Lilac’s side and back doors were open.  It is morning but still dark outside.
I was snuggled in the warmth of my cot with a slight smile, the quilt was folded double for added warmth.

I heard thunder and then a few drops pinged on the roof and thudded in the dirt outside.  I had to jump up and out of the trailer in order to shut the back doors.  (This is when conservative jammies come in handy.)

Now I am sipping coffee and writing to you.  The rain is tapping on the roof.  All the windows and doors are shut.  I have paper towel stuffed into the groove of the front curb-side windowsill that leaked in the last big rain.  I am sitting at my lap-top, the lap-top is sitting on a TV tray, which serves as my desk in this trailer.

It is dark, the screen is bright.

I have with me on this trip a larger folding table, but it doesn’t leave much room for morning and evening stretches.  The stretches are necessary to avoid chronic back and hip pain due, the doctor says, to arthritis, bulging discs, and degenerative bones in my lower back.  (Welcome to 67 years young.) The TV tray is just big enough for my laptop and a cup of coffee.  As Goldie said, “It’s just right!”

I have set the alarm on my phone to remind me to stop writing and get going at eight.  I am going to a Qi Gong (Chee-Gong) class in the park – rain or shine.

I am dressed for the day and there is an old pink towel draped over my shoulders.  When I packed in Florida it was 93 degrees and humid.  The winter clothes were stuffed in a cloth bag and hung from the head-rest of the passenger seat in the van.  There is a bag of outer-wear too, including a winter jacket.

In Rhinelander, WI, even though it is July, it is time to move the cool-weather clothes into the Weeroll.  The drawers are full of stuff in here. Items aren’t used very often will be moved into the van.  It is like a dance… the traveler’s shuffle.

Last I wrote to you I was going to drive back to my son’s home in Janesville for a visit.  His wife, Mel, was in the hospital recovering from surgery.  Jeremy is the only person allowed to visit during these COVID times.

Jeremy offered to make me a vegetarian meal!  Yay!

He made French-cut green beans with a hearty chunky marinara sauce.  It was filling and very good.  Thank you, Jeremy!

We had a nice visit, inside, at a distance, wearing our masks except when we were eating.  Jeremy has asthma and had trouble while I was there.  He uses a nebulizer.

He sat on the end of his chair, his knees spread wide, slumped over his belly slightly.  He moved his red face mask above his eyebrows in order to puff on this… bong-like mouth-piece attached to a tube that goes to a machine.  Puffy smoke-like vapor emerged from his “pipe”.  It really looked like he was a hippy with a read head-band puffing on his bong.  I had to laugh.

It was a great visit.  I drove back to camp glad to see he is managing his life well even with huge health and life challenges.

On Sunday, July 12, I only had a short drive to my friend Audrey’s home in a small town in central Wisconsin.  Before folding up camp, I went for a brisk walk on the bike trail.

The items I normally bungie to the curbside wall, (a folding chair, the portable sink station, folding table and two-wheel bike, I took extra care to make them snug against the wall, covered so they don’t scratch the wall (they did anyway).  I wanted to keep it snug so that I could easily move around without removing the stuff.  There will be only one night at Audrey’s, I won’t unhitch.  Then off I go to Rhinelander, where I have a site for the season and lots of time to spend with my sister and her husband.

I took only back roads to Audrey’s and it was a lovely drive on county highways and roads with names.  At one point I passed a painted barn and I turned around to go back and get a picture. 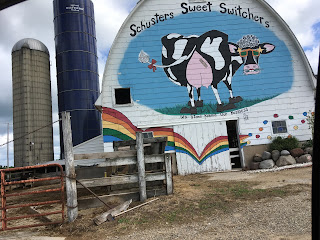 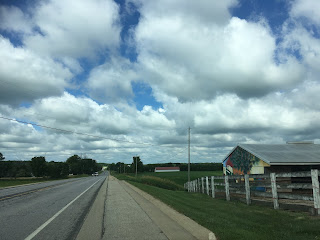 I stopped for a walk in Columbus, Wisconsin at a park where the building has been in use since it was built. 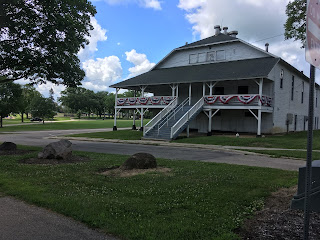 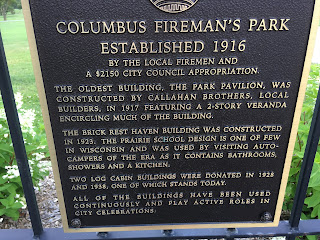 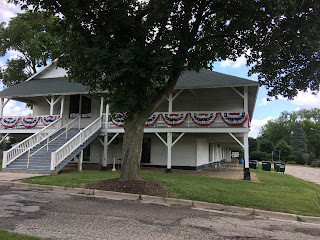 There was a lovely Armed Services Memorial with names of local vets imprinted on the paving blocks. 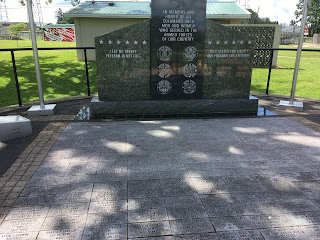 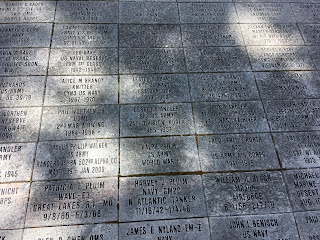 The park had play-grounds, Frisby golf, a swimming pool with life-guards, and the highschool football stadium.  There were shouts from a crowd nearby playing and watching a baseball game.

In Columbus it seemed there was not COVID to worry about.  I saw no face masks at the coffee shop I stopped at.

The Greenlake area has lakes on either side of the road.  I parked a while for another walk.  It was a lovely Sunday and it seemed everyone that owned a boat was out on the water this day. 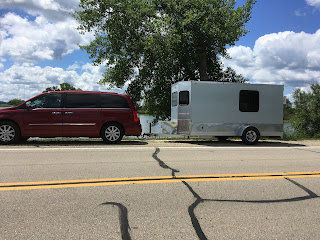 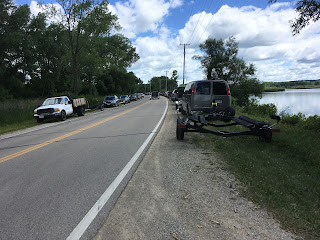 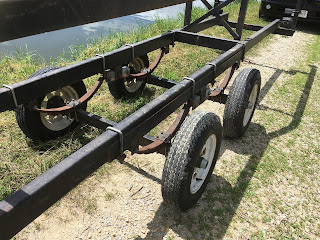 Is this a boat trailer for a pontoon??? 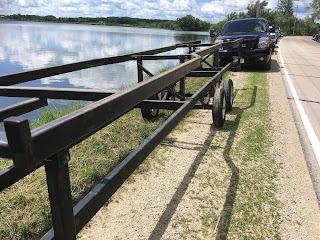 Back at the trailer I walked around it to inspect, and found that the gussets on some of the windows are failing.  This constant vigilance and repair is the life of a camping trailer owner. 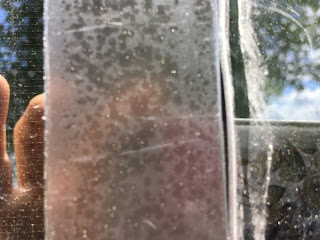 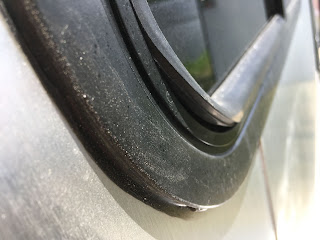 The side windows slide open.  When I have them open the mosquitos get in.  I found there is a gap between the screen and between the two sheets of glass.  I will have to stuff them with something if I ever want to have the windows open in a mosquito infested area... like northern Wisconsin. 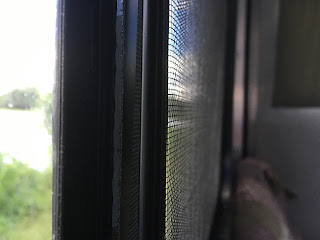 I was anticipating Audrey’s driveway.  A long one with no turn-around.  I needed to park close so I could plug in the refrigerator. 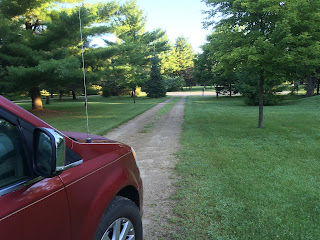 It was good to see her lovely face and her sweet dog, Foxie and Charlie the cat. 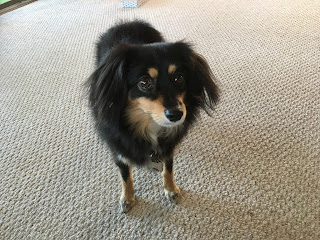 I had bought a four-pack of Champaign to celebrate our July birthdays.  We went for a long walk and then sat by the lake and drank and had supper.


I used her upstairs restroom where she rarely goes.  I took a shower!  My first naked shower in a week or longer.  Wonderful!  Thank you, Audrey.

I slept in the Weeroll with the doors open.  No mosquitoes because I kept the side windows closed.  Problem solved fore now.

In the morning we had coffee inside Audrey's porch looking out over the peaceful lake.  It made me want to live on a lake. 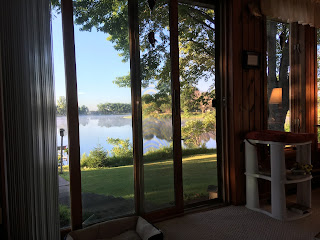 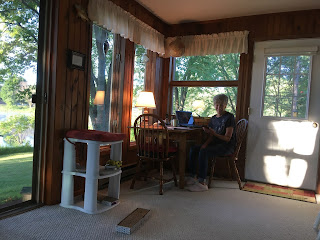 The ride to Rhinelander was lovely.

I had gotten a text from my sister saying she was looking forward to a masked hug!

I drove straight to her house before going to the campground.

So much more to tell you, but I am taking a class on line for selling my books on Amazon.  It is an advertising class.  It takes several hours of computer and on-line time a day, plus visiting and enjoying my time here.

So more pictures and info will come later.  I just wanted to let you know I arrived safe and YES!  I got a hug.