Hey!  I just remembered that I forgot to tell you something.

When I was driving from Florida (visiting Joan G.) to Mississippi (to visit Jean H.), I was starting to look for a gas station.  It wasn’t time yet, but if I found a nice one that looked clean and big enough to maneuver my rig, I might pull over.

I am heading up Hwy 84 in Alabama.  It is hilly and lined with forests mostly.  I don’t know I am on Hwy 84, I am not paying attention.  The Googlemap App tells me to turn and I turn, I trust it (most the time) to take me where I want to go.

I am listening to a delightful audiobook, How the Penguins Saved Veronica.

Coming up is a smallish-but-nice gas station on the left at an intersection.  As I zoom by it hits me.  I wonder if I should turn around.

It was how the side road angles, how there is a long incline in front of me.  Could it be?

I look at the shoulder.  There is probably a two-foot shoulder with 1/3 of it taken up with the ripples that make a hefty rumble strip.  OMG!

This was the hill we climbed!  This is the gas station we stopped to rest at!  Memories of that day in 2014 when George and I were riding our trikes from Northern Illinois to Florida flood my brain.  I start to cry.

It was August and hot.  We were riding early and trying to get to our motel each day by noon or one to get out of the sun.  We were usually only riding 30 or 50 miles a day.

This particular day I had mapped our route to take back roads and avoid this busy highway.  We had to cross a river and I had discovered a Ferry crossing along the way.  I tried calling the Ferry to make sure it was running, but no one answered the phone.  I had asked around at the motel we were staying at and no one knew if the Ferry was running or not.

I just trusted that it was, since we had been having good luck.  Hey luck was on our side.

The route took us down some back roads, more remote, there were trailer homes piled with junk.

The road side decorated with litter. 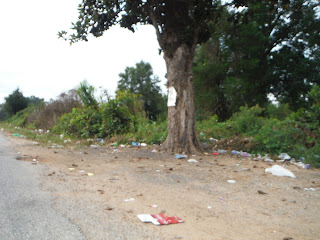 Every house it seemed had dogs that loved to chase us.  Once when we stopped to rest and pee behind the bushes, a postman pulled up in his truck.

By this time we were probably 25 or 30 miles into our ride.

“Is that still running?” he asks.

“The website had a schedule,” I told him.  “I tried calling but got no answer.”

He said he would check and let us know on his way back.  He took off, further down the road someone else stopped to inquire if we were lost.  They told us it was dangerous in this area, drugs and no-goods.

We ignored them and kept pedaling.  If people were sitting out on their porches, they would watch us go by with interest.  I just waved.  My pepper spray was handy, I had used it on a few dogs already this day.

We had put in 40 miles when the postman stopped on his way back through.

I wanted to cry, but I didn’t.  George didn’t criticize.  Already the undiagnosed dementia was making him quieter and more reliant on me.

I studied the map.  The only way for us to get to our next motel is either to retrace our route and stay again at the motel we stayed at last night.  Or we could take a slightly different route and join Hwy 84 a little further south.  I decided to try the different route, maybe it wouldn’t be so… seedy.

This alternative route had a huge and very steep hill we had to climb.  Googlemaps didn’t tell me that!  George and I would pedal a few strokes and then rest our screaming thighs.  We were pulling our Burley trailers behind our trikes.  A hill like this would be very challenging without the extra weight. 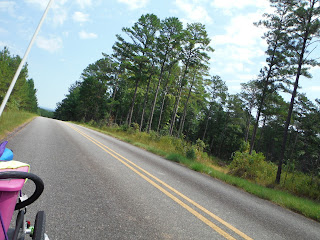 This was one of the days that George told me, “I am not doing this again.”
“What,” I asked.  “Go on a bike adventure?”

We are out in the heat of August in Alabama or Mississippi.  We get to Hwy 84 and take a left.  It is going to be tough.  It is the only route from A to B.  The shoulder is only two feet and a good portion of it is taken up with a rumble strip.  The highway isn’t extremely busy, but there is traffic. 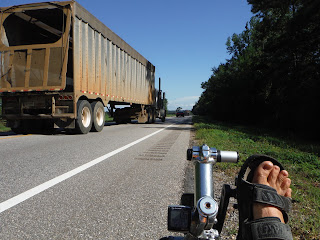 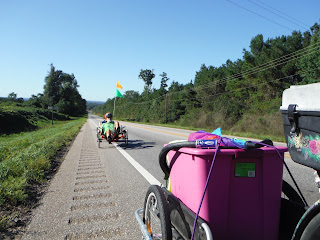 I remember the struggle up a very long incline.  I kept in mind the promise to myself of ice cream when we reached a place.  At the top of the hill was this gas station/post office.  We rested a long time, not knowing what to do other than keep going.  We ate our packaged ice cream (I think I ate two).


We were eating our ice cream and George looked at me and said, “I love you.”

He always said that.  It was reassuring since I had messed up our route and was beating myself up over it.

Then we climbed back on our trikes and headed the rest of the way to Monroeville.  When I reached the motel I added an extra night so we could rest.  We had done 82 miles pulling weight in the heat.
It turned out to be an ok stop, since the Museum is there with information about the Author Harper Lee and her book To Kill A Mockingbird.  The court scenes in the movie were filmed in the Monroeville Courthouse.  There was also information about Truman Capote too, who grew up in Monroeville. 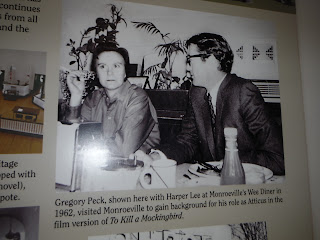 By the time we got home to Florida, George had said we wouldn’t go again a couple more times.

And then, maybe a month after we were back home he was asking where we would bike to next.  What a wonderful touring companion he was.  He is still with me, keeping me calm, reassuring me that solutions will come, that I am lovable even if I make mistakes.  The memory of him reminds me to keep calm, be patient, think it through...  I was/am truly blessed.

Where I left off in my last post… Jeanne C. and I were heading to Wineaux (pronounced Wine-o) for dinner and wine.
It was lovely.  I bought a bottle of wine and hope it makes it to share with my sister in Wisconsin. 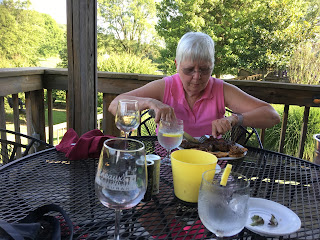 Back at camp I remembered that Jeanne had said this campground used to be a golf course.  I found some cart paths winding over the hills.  The moon is almost full.  I only went a little while, the mosquitoes chased me home. 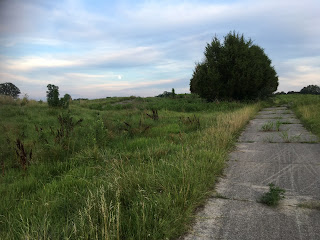 I poled folks on Facebook.  Can I hug my sister when I get there?

One said I should isolate for 14 days.

I said, well, I am pooping and peeing in my Weeroll, cleaning my hands after the gas station, and staying outside and at a distance from others.  Is that “isolation”?   They said I am being careful and that I should go ahead and hug her.  I will see how she feels.  She might be afraid because I came from the highest-covid-case state in the Union.  I think it will be at least 14 days from the Sisters on the Fly event when I see her.  The Sisters weren’t practicing six-feet very well, though I tried and may have seemed rude because I kept stepping away.

In Arizona hospitals have come up with triage guidance (“crisis standards of care” to determine which patients get ventilators and care in case the hospitals get over-loaded).  Arizona hospitals are rushing to increase capacity similar to what New York and Italy went through a short while ago.

But enough about that.  Today is the 4th of July.

As we celebrate our freedom, I would like to thank all of you who have taken action to protect this freedom.  I am grateful for our freedom of the press, to congregate, to speak out, to practice our own religion, to vote.  Whether you served in the armed forces, whether you marched in the streets, met with your congressional representatives, and talked with your local officials.  You know freedom is not free.

I exercised my freedom by going for a bike ride and writing stuff for all to see.  I also shared my voice on Facebook and renewed my membership in the League of Women Voters.

Today I rode south on the Tunnel Hill Trail. 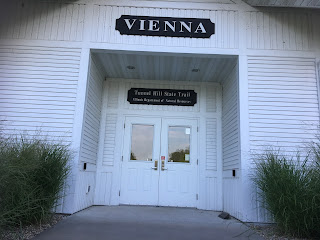 I rode by myself. 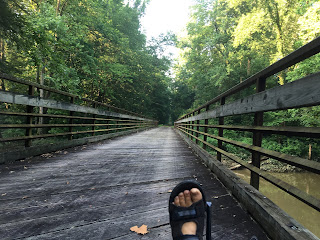 I aimed to visit Heron Pond.  I think it has been eight years and I wanted to see if the board walk had been improved or left to decay. 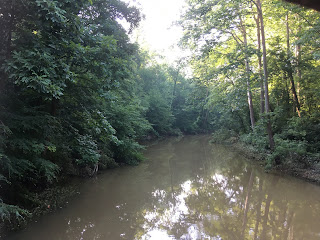 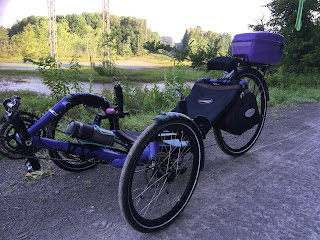 The road from the trail to the Heron Pond parking lot was the same.  Gravel and steep in places, I walked my trike up, and bounced my way down.  When I passed a house, I watched for dogs, and put a whistle in my mouth just in case. 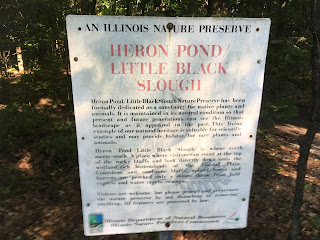 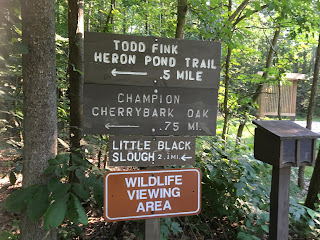 I locked my trike and headed down the trail.  It is ½ mile from the parking lot to the boardwalk.  Only I got just a little way and there was a bridge over the Cache River.  On the other side the trail and surrounding woods were under water.  No way to get around it. 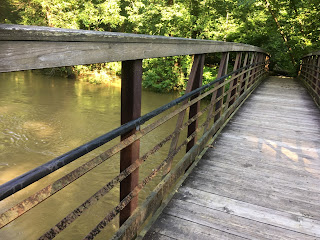 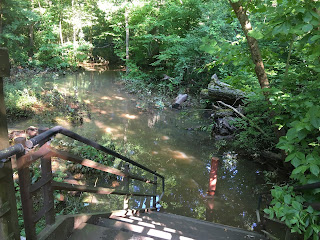 That decided it.  I will return in the fall on my way back to Florida.  This area will be lovely with autumn leaves in early October.  Hunters will be busy. 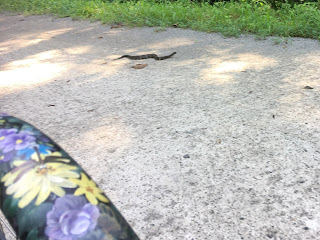 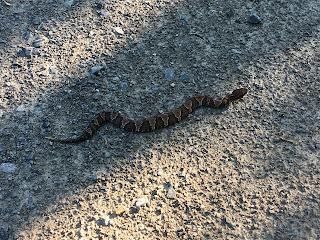 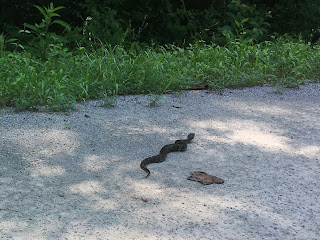 I used the Y connector for a while.  It worked kind of ok, but I couldn’t lock the faucet in the right position facing down because the Y was in the way.  Then, this morning, I went to turn it off and the little valve lever busted off and water shot out in a big shower all over Lilac and me.

I have now placed my sink behind the trailer next to the water spigot, so I can turn it on and off without going back and forth.  It might be a more private place to take my clothed shower this evening.

Tomorrow I head to the quad cities on the border of Illinois and Iowa.  I am meeting up with Peggy T. and Kenny who both ride trike.  We met at a Catrike rally years ago and re-met this year on the Withlacoochee.  We will be riding roads.