It is quiet and peaceful here this morning.  The birds are singing.  Most of the guests here are still sleeping or soaking in their morning coffee.

If I just look in front of me I see trees and grass.  I am fortunate to have an end of the aisle site at the very busy, sardine can lay-out of the Timberline Campground in Goodfield, Illinois.

When I entered the campground yesterday around noon I was a bit shocked.  This place was buzzing with golf carts and dirt buggies zipping around at high speed sending up dust clouds that hovered over the air.  The pool area was packed, groups of people were gathered at campsites. 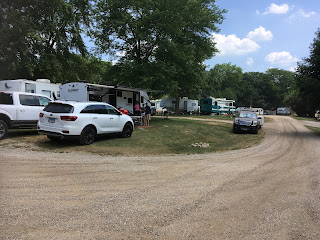 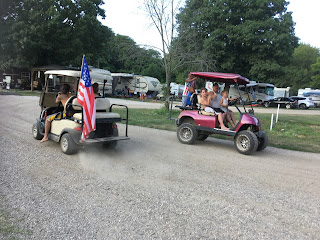 I got here so early because I packed up all I could and hooked up last night for an early departure.  I must have left the campground in Vienna, IL around 6:15 a.m.

The drive here was uneventful except for a few miles on a flat but wavey pavement very straight country road.  I had to drive it at 40 mph.  Mostly I was on the interstates.

Once in Goodfield, I went to check in at the campground office and there were about 10 people in the large room. I was the only one wearing a mask, ("You are welcome.").  Check in was quick but when I arrived at my site it was occupied.  I checked the paperwork and check-out time was at one o'clock.  There was an un-occupied spot with a table in the shade.  I called Debra and my sister, Mary. 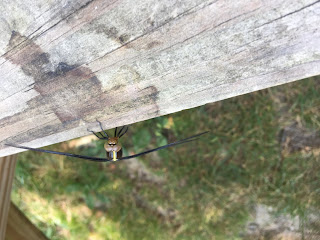 I texted Peggy and we arranged to meet for supper at the Busy Corner Restaurant.

The bottle I use to hold my pee mixed with water had started to leak.  I decided to go shop for a new container, only this was Sunday.  Would there be anything open?  Well, no stores in Goodfield, but the next town over had a Dollar General.

Today while stopped to get gas I saw in my car window that I had tufts of hair sticking out on the sides of my head and the hair on top that was supposed to be sticking up was flat.  I guess I need a mirror.  I had been using my car windows, but this morning I didn't get a good reflection or I was packing up and forgot.  I drove nine miles to a Dollar General and I was happy to see that all the customers and the clerks I encountered were wearing masks.  "Thank you!" 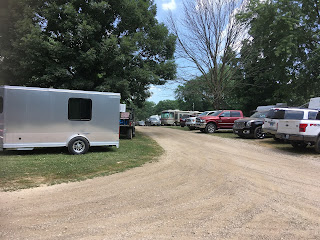 At exactly one o'clock the folks occupying my site pulled out.  I pulled in, as I was driving on gravel I could hear the brakes on the trailer grabbing too aggressively and dragging the tire.  I had been trying to adjust, but it was time to pull out the manual because what I was doing wasn't working.  Fortunately I had brought my Weeroll folder with me.

For those of you reading this that don't have a trailer, I have a little box mounted in my van that wires up to the trailer when I am hooked up.  It operates the brakes on the trailer.  There are three controls on the box. 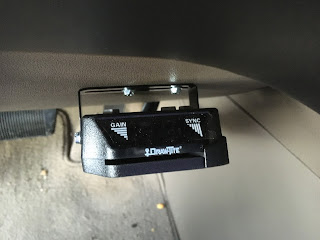 I had kept trying to adjust with the sync buttons, which didn't help.  I carefully read the directions again and the adjustment was quick.  I have to be hooked up, I have to adjust the gain.  It was at 2.0.  I moved it down to 1.5 after I parked the trailer.  We will see if that helps once I get going again. 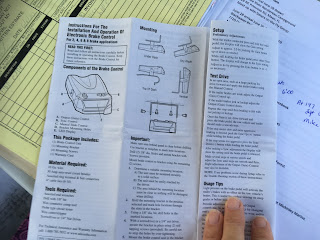 This trip I decided to pack my bike upside down.  I wanted to be able to keep the bike in the trailer if I am only staying at a place one or two nights. 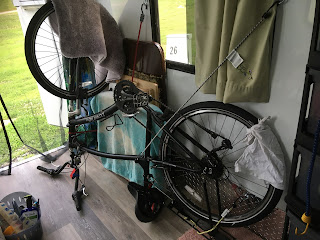 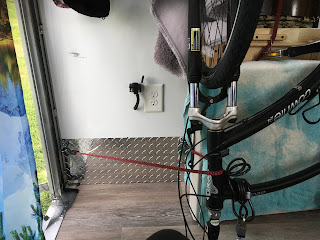 Behind the bike is my folding sink with a towel over it, a tv tray, and a folding chair.  I have another folding table I moved to the car because I won't use that again until I get to Rhinelander where I will be staying for two-plus months.

I try to keep things from rubbing against the walls of the trailer because the paint comes off the aluminum pretty easy.  I already have some scuff marks.  Debra says to use pool noodles and bungee or plastic tie them on.

You might think I can just go in and sleep in my trailer stealth camp mode.  I supposed I could, except that everything gets moved to the floor in transit.  There isn't much room to stand.  But I suppose I could put enough items back up to have some floor space to manuevre. 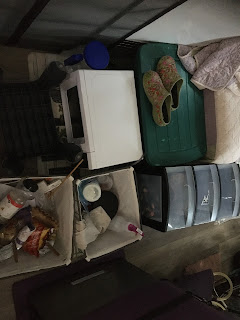 
Bill D. emailed me in response to my complaint about the humidity and clothes getting moldy before they dry.  He said to hang them in the car since the car gets hot in the sun.  He has done a lot of camping.

I had time before supper, so I washed my clothes in the sink.  They have a laundry room here, but with all the croud and no masks, I don't want to risk it and spread COVID on this trip.  Besides, playing in the water is a good thing to do on a 90 degree afternoon. 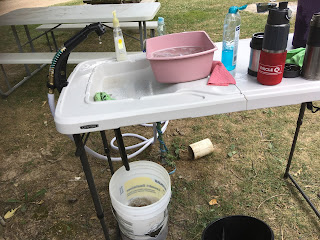 I have laundry soap with me, but I used shampoo to wash the clothes.  I learned this trick from Sylvia Halpern who travels very light.  The shampoo does the best job I have found in getting rid of the stink that clings to bicycle clothes. 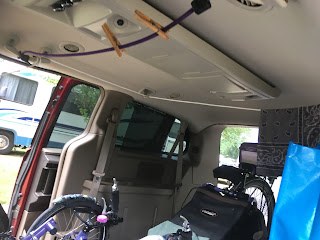 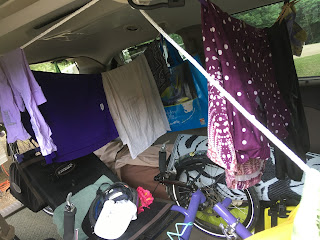 As long as there was soapy water, the table needed washing.  As I began to wash, I stopped and took a picture so you could see how clean the former tenants left their site. 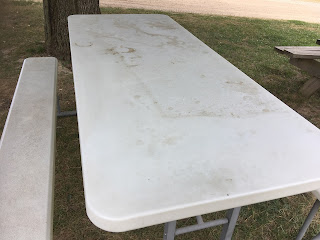 
I have stopped using public restrooms if at all possible.  At first it was intimidating.  We all pooh, but then we flush and walla! Gone.  It took a few days to finally try the system I had set up.

The system is a five-gallon bucket and inside it is large Folgers plastic container with a lid.  The Folgers container is stuffed with plastic shopping bags.  On top of that I have a small bucket with a shopping bag lining it.  At the bottom of the bag is a peice of a disposable bed pad (left over from my days caring for George).

After I do my business I have TP, wet wipes, and paper towels that cover the mess and help absorb smell and moisture.  Done!   Charlotte uses special bags.  I hate buying plastic to create more plastic waste, so I am using used shopping bags, which can leak so I have to double layer them.

I try to remember to use my cloth bags when shopping, but I still have quite a stash of plastic bags.  And during the original lock-down grocery stores were not letting us use our own bags.  These are special times. 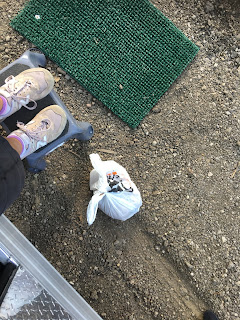 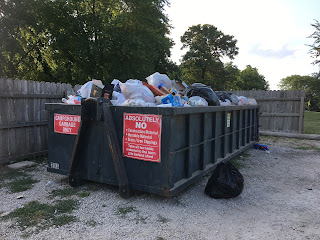 Dinner with Peggy and Denny

I arrived at the Busy Corner Restaurant early and the outside area was not occupied at all.  So I was able to select a table in the shade and a seat away from others.  It worked out wonderfully.  The staff wore masks.

It was great seeing Peggy and Denny again. Denny had biked 63 miles that day and was hungry.  Peggy began to plan our ride for tomorrow.  They both have medical appointments in the morning so we are meeting at 9:30 to ride.  I am so looking forward to riding!

They asked me to keep them posted on the return south plans.  They would love to meet up maybe in Minnesota or Iowa or here again and ride!  What fun!

Peggy complained that Denny (who read my books on his e-reader) wouldn't let Peggy use his e-reader.  But what she really meant is she doesn't like to read things on the computer.  I understand, neither do I.   I prefer holding the book, turning the paper pages.

Peggy said she wanted to read my books but hadn't yet.  I told her I had brought some paperbacks with me and she seemed thrilled and asked me to bring them with me when we meet today.

Then they paid for my dinner!  Thank you!  Wow, that was unexpected! 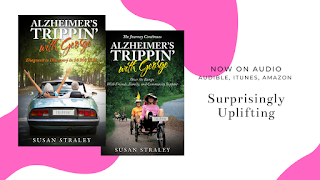 I will gift her the first book, about our travels and rides at different places in 2016, Alzheimer's Trippin' with George.   The second book, The Journey Continues, is about the rest of our journey with Alzheimer's disease and the wonderful support we received in Citrus County, Florida.

Back at camp, a good thing about the Timberline Campground.  It has good (though unsecured) internet!  This is a first on this trip.

The internet allowed me to check the COVID numbers in the evening and watch a youtube video.  The air conditioner running helped block out the noise of the racing dirt buggies/souped up golf carts.  But it didn't block the booms of the remaining fireworks. 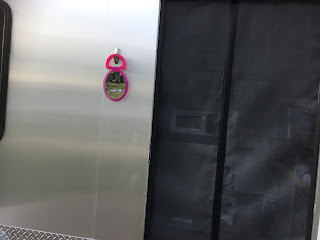 I cut my hair a bit this morning and used my new mirror to put the tufts in the right places on my head.

Oh, and thanks again to Bill D.  The clothes were dry and smelling fine this morning!

Thanks to those of you who have commented on these posts or sent me an email in response.  It is good to have you along with me on this trip.  Along with the memory of George, it keeps me company and makes it more fun.

And thanks to the internet at my site, I can write to you.  Now it is time to get ready to ride with Peggy and Denny.

Oh, and below is something that someone wrote on Facebook but I don't know who.  It has been copy and pasted and shared but the author is unknown.  Enjoy a romp through 2020 so far.

Greetings from Inverness, Florida.   I am back home and very much enjoying springtime in Florida.  My garden is happy, the monarchs are flut...