Last I wrote you I had a wonderful plan.  After riding the New River Trail in Virginia, I would attend a Sisters On The Fly (SOTF) event on the border of Virginia and Kentucky.  Then to the Virginia Creeper Trail starting at Whitetop Mountain, then I would make my way to Myrtle Beach and then meet up with friends to ride Jekyll Island.

A great plan with some great places to visit and some friend time too.

And I was living the plan.  I was at Breaks International State Park with the some Sisters.  Then I got a call from my friend Jean in Mississippi.  She just got a bunch more clients and was asking if I could come help her with all the paperwork involved. She treats trauma victims with a special treatment called EMDR.  And she is good at it and helps people.  What better task is there for me?

The timing was perfect because I was just thinking that I was done being a tourist.  I have pampered and treated myself to great views and experiences since April.  I wanted to be working again on something bigger than me.  Jean's offer was just what I was seeking next.  It meant canceling all my wonderful plans that I invested many hours creating, but that's OK.  And just maybe I would arrive home a couple days earlier.

I made calls to cancel all my reservations (I hope I captured them all.) I experienced a little grief/disappointment giving up the Creeper Trail and the gathering with the Polk City, Florida friends to ride trike on Jekyll Island, Georgia.

Then I started making reservations for the journey to Mississippi and the stay near Jean's home.  Only the campgrounds were full near her!  We found a campground that was first come first serve, no reservations.

The Sisters' event was just what I needed. Though the twisting narrow road to get to it was harrowing.  Though my car had another episode of not starting.

I just got out of a Dollar General.  I turn the key and the car grunted (not clicked) as it does.  I waited and tried again and again.  A man came and offered to give my batter a jump.  I told him he could try but it wouldn't work.  And he did try and it didn't work.

I walked up on a hill to get cell service to call AAA to get a tow.  Then I returned to my car and tried starting it again. It started just fine.  So I called and cancelled with AAA.  I drove myself to the garage.

When I arrived there was a loose dog in the lot that barked and barked at me and made me nervous.  The guys at the shop didn't grab him or stop him from barking.  When I talked to the mechanics there, they didn't know what it would be if not the battery (already replaced and jumped this time too and it still didn't start) or the starter (replaced last year... yes I was having the same trouble last year and the new starter didn't fix it.)

The mechanic wouldn't know what to do.  I mentioned what strangers have suggested when I was broken down, the timing and alternator.  He didn't think it was that.

By now the dog had stopped barking and had placed a chunk of wood at my feet.  I was afraid to bend down and pick it up.  I asked the guy if I could.  He said I could but then I would never be able to leave because I would be throwing the wood all afternoon.  The dog never quits.

I was one of the first folks to arrive at the Sisters event, which turned out great because I got to meet two very interesting and bright women who also had arrived early.  Susan is a deputy policewoman and had a small "Runaway" camper that is so small you can't stand up in it.  She is a few months away from retirement and already has a couple of working camper gigs for summer of 2022.

Derry had a van that she had done all the conversion work herself. Amazing cabinetry and she had also done all the electrical work including installing solar panels.  Derry is also retired from being a Veterinarian.  I was impressed with both of them.

I spent the majority of my social time with these two women and we had such fun!  By the end of the weekend we were making plans to see each other again when they travel to Inverness, Florida this winter.

We hiked with Julie who is studying herbs and their uses for our health.

Derry didn't want me to post any pictures of her, so you can't see us together. 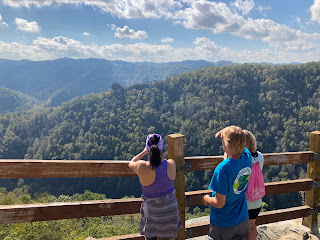 A fellow sister had to cancel and she offered her site to me, which was right across from the event's leader.  The first night I offered to have the fire at my site.  The leader was going to have it at her site, but her fire wouldn't start even with a kind of blow torch, my wood must have been drier.  It worked such that the fire circle was at my site every night.  Fun!

I did my first ever zip line.  I was the only one in the group that chose the time I chose, so I went with a couple of strangers who were very friendly and I had a great time. 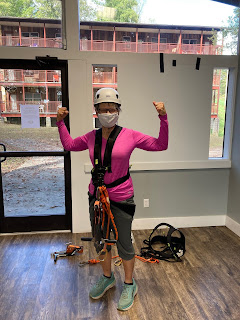 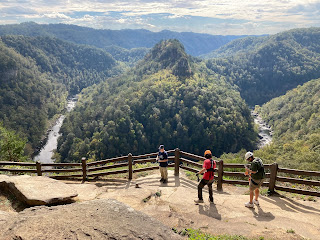 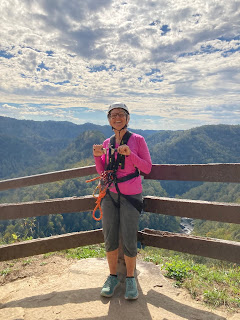 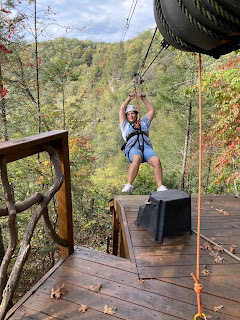 Though I was sad to give up this-year's visit to the Virginia Creeper Trail, I was ready to get out of the mountains.  The views were breath-taking.  The drives on the hairpins with Lilac in tow and my spotty starter on my van left me yearning for flatter and straighter roads for a while.

I camped twice on the way to Mississippi.  Harrison Bay State Park in Tennessee was recommended to me.  I had a lake-side site!  I hiked a nice trail there for five miles and then rode about 18 miles on a trail in Chatanooga that ran along a river. 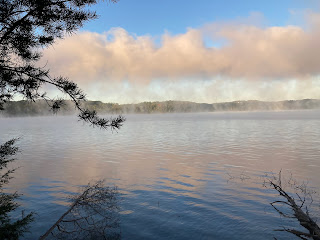 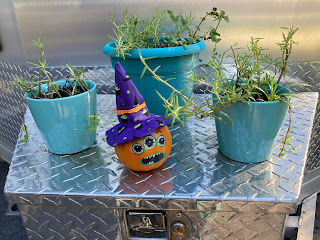 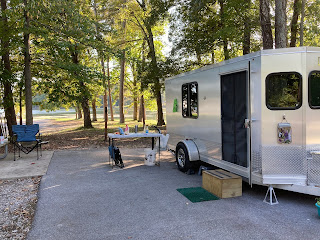 The mile markers on the trail were lovely metal cut-out works of art. 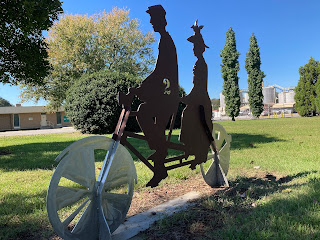 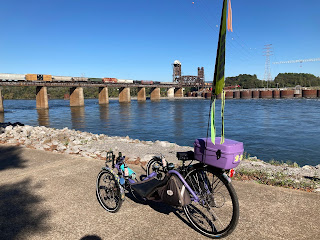 Then Jennings Ferry Corp of Engineers Campground in... Alabama.  I had to stop and think on that one.  What state was I in?  I only spent one night there, so I didn't explore the area.  The one hiking trail was blocked, maybe they had flooding? 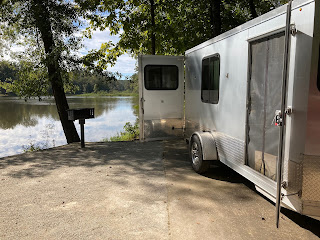 So it is time to got to work.  I just wanted to give you a quick update on where I was.  This afternoon we will ride trikes here near Jackson, Mississippi.