I am in a library in Cheat, West Virginia.  There isn't cell service in my campground, so I have to drive to a location each day.  This is the first time I have opened up my lap-top since we started our bicycle tour on September 21st.  It is like coming back home.

I just looked back at some of the posts from my trip and they are terrible!  I didn't have much time, energy, or cell service each day.  Plus I didn't have my lap-top and was trying to blog on my little Iphone, which wasn't cooperating.  Those are my many excuses for sending out such bad posts.  Sorry, thanks for following along anyway.

I hope to go back and fix some of those posts.  Maybe I will add pictures and stories to them and then share the links back to them.   I think that might be best to keep it all in chronological order... for future readers.

I last wrote to you the evening that we arrived in DC.  It was pretty cool riding our bikes around to the different monuments.  I highly recommend that mode of transportation when you visit the US Capital Mall.  The last times that I visited we had walked everywhere.  Joan spent a day walking the area and she tells me her fit-bit told her she walked 11 miles.  Everything is big and there is so much to see.

We planned on one day in DC.  Only one day and two nights, because the motel was pricey. The luxury and proximity to the mall was very welcome after so many days of biking and tent camping.  We both slept well.

If you decide to do visit to DC, plan more than one day.  On top of the museums there are interesting bike trails to explore, which I will tell you about later.

We had reservations for the National Museum of African American History and Culture for noon on our one day in DC.  In the morning Joan and I went our separate ways to explore.

I walked by the Native American Museum.  The waterfall/fountain was a lovely design.  I took a video. 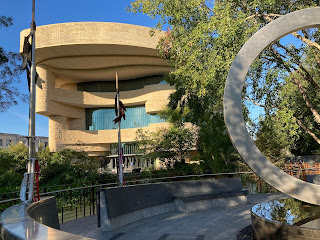 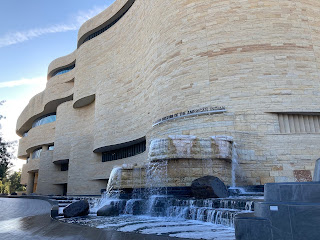 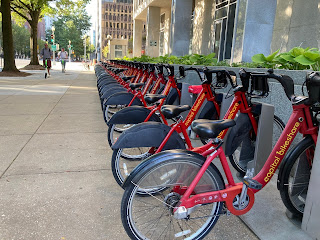 There were a bunch of big trucks without trailers lined up, here to be heard by the law makers.  And then I saw a woman dressed like the recently-deceased Supreme Court Justice Ruth Bader Ginsberg.  I had just received an email notification that women were marching all over the country in response to the crazy Texas law that rewards common citizens for suing anyone who gives information, provides transportation, or helps a woman get an abortion after six weeks gestation.  She said the speakers start at 11:00 and the protest starts by the Supreme Court after the speeches.

I wish I had gotten a picture of her, but later I saw this woman and took her picture.  There is always some group bringing their issues to the Capital. 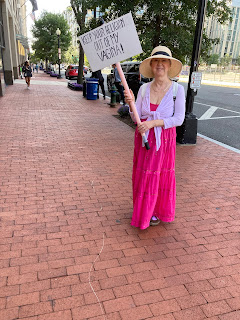 I walked around just a bit, and then at nine a.m. I had to find a quiet place to make a call to the Uhaul place to confirm that we would be picking up a van the next day.  I was on hold for an hour and a half! While I was holding the many trucks began blowing their horns.

I started walking the mile and a half to the Uhaul while on hold.  I got there and could see that no one was answering phones.  They told me that I wasn't supposed to call them to confirm, that they would call me before six p.m.  (that isn't what their email said).  And the van would be at a different location.  What?  A different location?  We are on bicycles, how far is it.

Only a mile further.  I got the address.

But now the morning was almost gone and I had to rush back to get to the Museum of African American History and Culture by noon and somehow grab a bite to eat on the way.

The museum was great and overwhelming.

I took a picture looking out the windows through the lace pattern onto the lawn of white flags on the mall in memory of the almost 700,000 COVID victims in the USA. 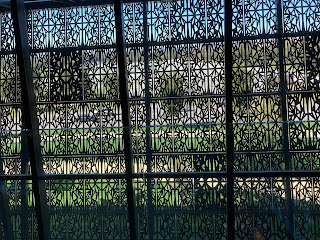 The first room I entered had a fun video of stepping and clapping. 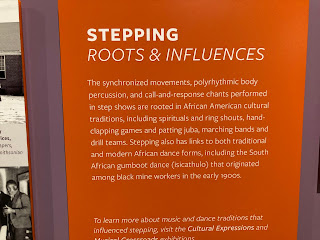 I stopped at the info desk to see if they had audio tours but they said due to COVID they don't have them right now.  A lot of the interactive displays and the videos were closed down too. 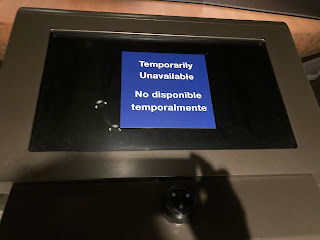 In the culture and arts section there were several posters of all "colored cast" movies that I had never heard of.  I took some pictures in case I can now stream them. 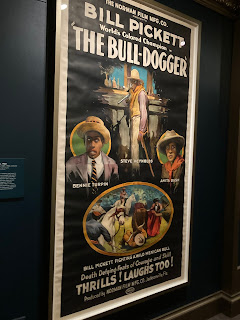 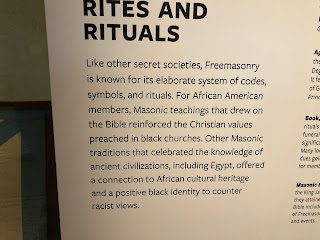 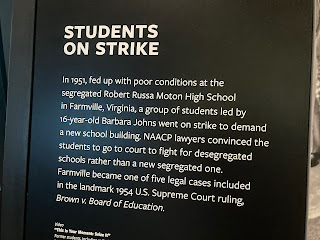 Below is a picture of Barbara Johns, one of the leaders that helped bring about the court case and eventual ruling in Brown vs Board of Education. 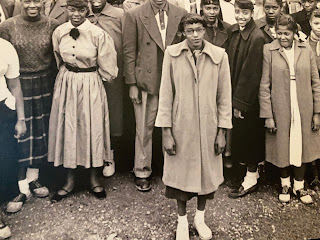 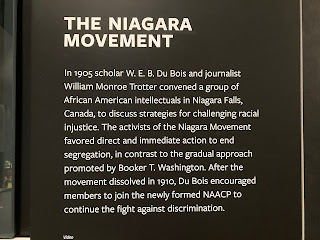 In the music area of the museum there were so many familiar and unfamiliar artists.  One array of videos had me dancing. 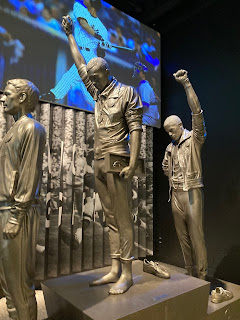 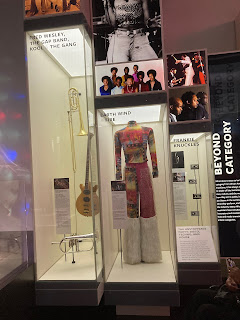 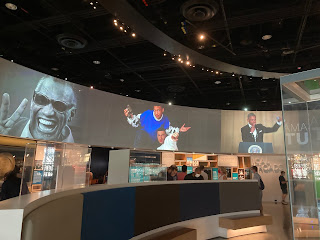 We all know about the Black Lives Mater Movement now.  Most of us know now that the police were first created to round up run-away slaves... or free persons to put them back into slavery.

The police have evolved of course, since then.  They are now who we call when we have a car accident or are being followed or need protection. 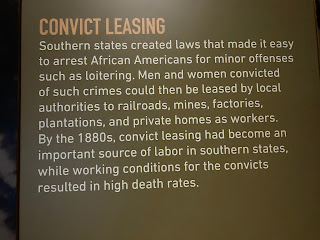 There was one section of the museum where we were not allowed to take pictures.  It was of the more recent events.  Probably because emotions are so high, and victim family members are still hurting.

After that section it asks each of us to write down what we can do to help reduce prejudice and hate.

If you want to visit, give yourself a few days to just do this one museum!  There is so much to take in.  I was there five hours and then I was just too burnt out to absorb any more.

Joan had said she wanted to get Tai food for supper.  But then she had some meaty tacos from a food truck at lunch and wasn't hungry again. I had stuffed down a quick beans and rice dish before entering the museum and I was really looking forward to eating.  We started walking toward China Town and then Joan turned to me and asked if I was set on Tai.  I said no.  She said she wasn't hungry so why don't we go our separate ways again, and I can go get what I wanted.

So once again I was on my own.  Italian pasta with lots of brocolli and marinara and a light beer, $31.  That is DC.

In the morning we loaded up the bikes again and rode the elevator down to the street.

The elevators require a room key to work.  They were tricky at times and the first time we each rode our bikes up, we both ended up going up and down with folks before it stopped on our floor.  It is a good way to keep the homeless and the thieves from wandering the halls of the motel. 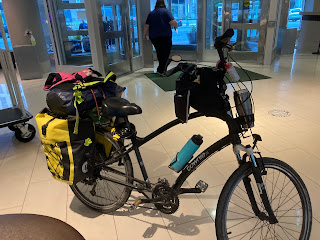 Then we started riding to the Uhaul station.  All of our ride from Pittsburgh, Joan was a fast rider.  So I was trying to go fast so she wouldn't get frustrated with my slow speed.  But instead she got frustrated I was going too fast... "We are touring, that means we stop and look at stuff a lot," she told me. 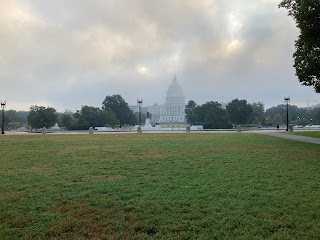 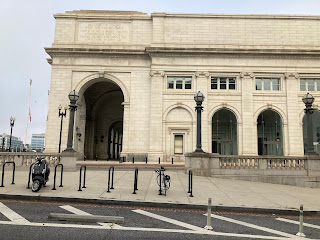 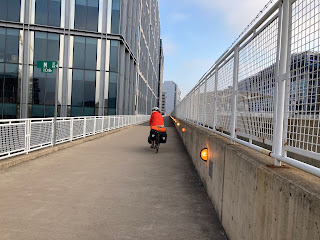 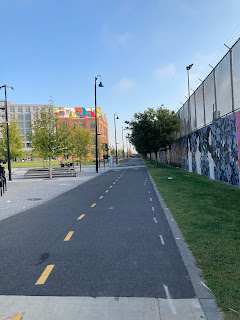 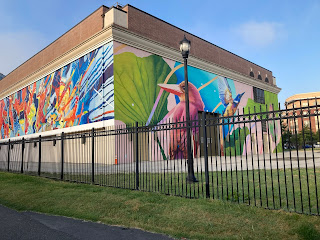 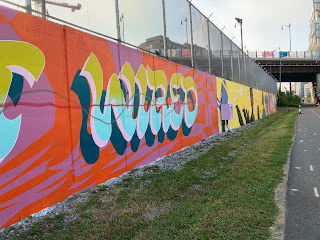 We both agreed that we could have spent a couple more days in DC exploring the bike trails and places away from the Mall as well.

We got our van and I drove us four-five hours through beautiful hilly areas, back to our cars in Homestead.

When we arrived in Homestead I couldn't find my keys!  I thought for sure I left them in the front basket of my bicycle.  I looked and looked.

I had stored a second key in Lilac.  So I used the combination lock on Lilac to get in and get that fob.  Only that fob wouldn't open the doors either.  The electronic signal wasn't working.   Somewhere I found the first fob and tried that.  Nope, it didn't work either.  I knew it wasn't the battery in the fobs because I had just change them.

Joan showed me that I could unlock my car with the key.  But as soon as I open the door the alarm goes off and I have to hurry to put the fob in the ignition to turn the alarm off.  This will not do well in a quiet campground!

We unloaded the Uhaul and Joan followed me to the Uhaul place to return their van and then give me a ride back to my car.   Joan has the front passenger seat set at a forward slant for packing her bike and stuff.  It was an awkward ride, I sat with my head in my hands and my elbows on my thighs.  I was glad it was only seven city miles.

I had another 69 miles to drive to my campsite near Morgantown, West Virginia... or is it Virginia?  It seems that every time I drive a few miles I am in another state around here.

My camp site is very roomy, the campground is quiet and sparsely populated. 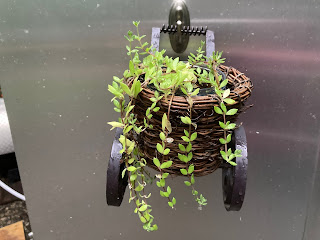 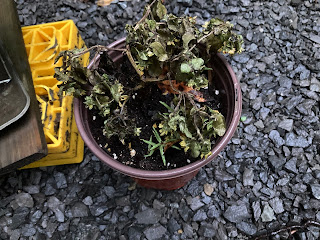 My body and mind are still not feeling like themselves after all that riding and site-seeing and garbage eating.  My first day on my own I did laundry, went to Anytime Fitness, and shopped for veggies to refill my tank. 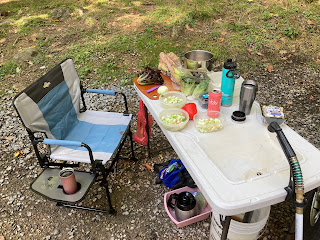 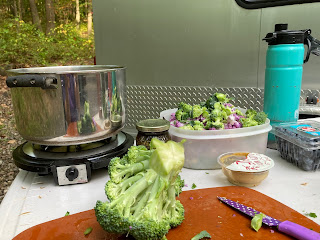 My campsite is close to the restrooms, which is nice.  This spider was hanging from the door knob yesterday. 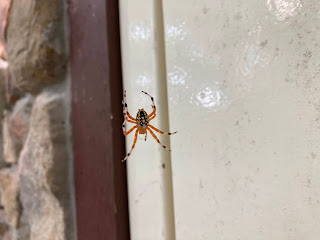 There is a trail or two near here.  I rode about 18 miles yesterday on one.  I am back on my trike again.  I averaged eight miles an hour... slow slow slow.

I am in this area until Sunday and then I move on to the New River Trail in Virginia.  Someone told me about a great campground along the trail, but I have not been able to locate it.  So I have reservations at an RV park where I think I will have to drive just a little to get onto the trail.

I am going to reach out to trike and recumbent groups in Facebook and hopefully meet a new friend or two there!  We will see, I have been lucky so far.

Part of me is yearning to be home.  But I have a date in late October to meet up with trike friends near Jekyll Island.  So in the meantime I plan on taking care of myself...

Which brings me to the roads here!  OMG.  I think they were designed during horse and carriage days. They are hilly and winding and narrow.  There is no shoulder at all, not even a gravel one, and the road dips right into a ditch at the edge.  If you want to drive the speed limit you better know for sure where your tires are and where your outside mirrors end.  I breath a sigh a relief when the road opens up to a size and expanse that I am used to as a midwesterner.

Today I forgot my purse in my trailer.  So I better not get in an accident or get pulled over!

It is time to fold up and go back to camp and eat, the veggies and eggs are calling me.

Joy is a Choice

Hello, I am glad I went to Jean's to help her with the paperwork.  She appreciated my efforts and she paid me!  There will be more work... 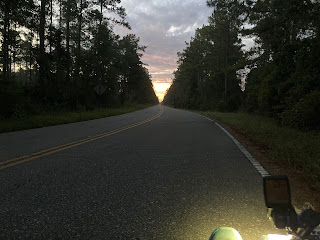