Fall in West Virginia and Things are Looking Up!

I have spent a whole week getting back into routine and feeding myself better foods after our 10-day ride from Pittsburgh to DC.

It took about four days before I started to feel like myself again.

I called the Chrysler Dealer Service Center in Morgantown, WV to see if they could fix my car or my fobs.  But I had to leave them a message and they never called me back.  I went there, but their parking lot was packed, and I knew there was no way they would get to me.

So for several days I either left my car unlocked or did the quick open the door and get the key in the ignition to turn off the alarm.  I was down to three loud honks.  The other day I put a new battery in one of my fobs.  I tried it with a little hope, but nothing happened.  I concluded it must be something inside the car.

The next morning it was still dark at 7 a.m. when I went to get in my car at the campground. Dang, I had locked it without thinking.  So a quick three-honk very loud alarm in the campground.  Sorry fellow campers.  Later that day I was at a picnic shelter with electric (Hey, did you know you can google “park picnic table with electric near me” and google may direct you to a park with a shelter and electric?  I was so happy I could have danced.  That is so much better than spending hours in a library on a beautiful day. The shelter it directed me to was up on a hill and had good cell reception.  Heaven!) 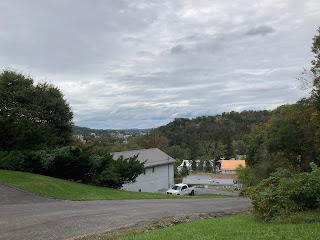 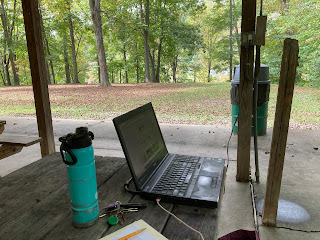 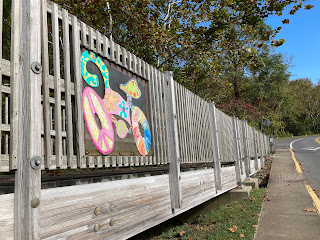 So I was taking a break from the screen and I noticed that the fob wasn’t quite shut tight.  So I squeezed it shut.  Then just for giggles (without much hope) I aimed it at the car and pressed the unlock.  “Did those lights go on?” I wondered.  So I pushed the trunk open button and the trunk opened!  Yay!  I had my fob back.

I was using the internet and my computer because I was frustrated trying to find camping spots.  It appears that Virgina and West Virginia are popular camping spots when the leaves begin to turn.  One weekend all the campgrounds I checked were filled with campers.

It took me about three hours but I finally got my October campspots booked.  And I am thrilled with the itinerary, I hope you that are familiar with the Virginia trails are happy too.

I will spend several days in Fries along the New River Trail.  The trail is highly recommended.  Unfortunately the price at the private campground is $50 a night.  But Hey, I am on my way home.

Next I will be attending a Sisters on the Fly event.  I have had too much alone time this week.  I need some laughs around a campfire and to share an adventure with some active women. The event says there is kayaking, zip-lining, hiking and lots of other stuff too.  Plus we are supposed to do a Hatfield and McCoy thing so I will have to see if I can find some overhauls at a Goodwill.

Then I will be going to the top of the Virginia Creeper to camp.  It may be cool up there at 5,000 feet.  I still have to schedule a shuttle service for taking me and my bike back up the mountain.  I plan to bike down to the low point in the middle of the trail and then up to the far end, then coast back down to the middle where I will catch a shuttle… if the shuttle runs late afternoons.

Then I will spend two nights at Myrtl Beach in the Carolinas.  I have never been, the campground was full, but I got two nights during the week.  Then on to meet up with some triking friends hear Jekyl Island.

I mapped out my route home from there and it is only 189 miles.  But then of course that is via the highways and I may not do that.  I have scheduled the water to be turned back on by the city.  She assured me that they watch the meter when they turn it back on and if it shows there is a leak they will shut it back off.

I am not far from Coopers Rock State Forest.  I haven’t hiked over there, but I did go to the overlook and got the maps. 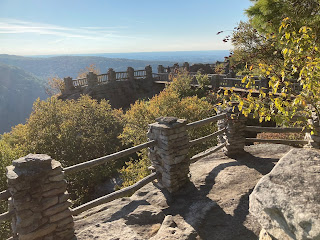 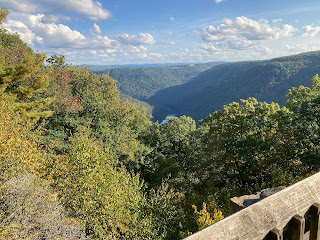 Yesterday when I was returning home in the late afternoon I was Chester Riddge Road when I saw a dog about the size of a German Shepard.  It was starving, all its ribs showing.  When I stopped my car, it came toward me with friendly and frightened eyes. Poor thing.  But I didn’t know who to call.  I tossed  out my window to him a frozen veggie burger from my groceries I was binging home.  All night and all day it has bothered me.  It had a collar on and tags, but I was too afraid to get out of the car, plus it was twilight and I was parked in the middle of the road.  Still, I am wondering if I should make something with peanut butter and go sit up there and call for it.

Poor thing.  I would have cell service on the hill, maybe I could find an animal control line or the human society or take pictures and put them on facebook and twitter.

During our ride my mind wasn’t working as well as normal. It could have been physical and mental stress.  Joan looked concerned at times.  So I have made an appointment for my annual physical when I get back and while I am there I will see about getting tested, but I don’t think the mini-mental exam wills show anything.  Maybe I am wrong.

I would like a more thorough exam of my brain and cognition though.  Since there were some things, but I did feel very stressed which is weird because it was such a lovely place to ride.

As I think about what I will be doing when I return home I am getting excited.  I have folks to see, people I love and who love me back (thank you very much!).  I have stuff I want to do for my trailer, I have stuff I have to pack away as I get ready for the folks that will be renting my house from January through March.

And on top of that I have an exciting job opportunity to discuss.  Don’t know how or if that will move forward, but it is something I desire.

And then there is Thankgiving.  Though the gathering will be smaller than pre-covid times, it will be warm and wonderful. I am blessed with friends with whom to share it.

This morning it was still drizzling from an all night rain.  I walked up the road and found another campground up on the hill.  Sand Sprngs is high enough on the mountain that it has cell service.  If I ever return to this area, I will go there.  It won’t be a quiet and probably costs more than $30 a night.  But I won’t have to drive up the hill to connect.

I just drove up the hill with my phone and computer to upload this and when I pulled in I bottomed out my car on a hump.  It will be interesting how I get out of this one.  Maybe I will need to unload the trunk!

I brought food with me because this is the area I saw the starving dog.  But the road is busy this morning, I doubt I if I will see it.

Enjoy your journey, it is the only one you got.