Last I wrote to you I was telling you about the first day of my test fully-loaded bike tour.

Now that I am at a place with cell service and a bit rested, I will tell you the rest of the story.

I figured out the miles I did that first day:  76 plus miles.  Bike tours do that all the time, sometimes 80 or 90.  But I don't do that, especially not fully loaded with tent and sleeping bag and cooking supplies.

George and I did 80 miles one day on our ride from Illinois to Florida.  It was because of an error in my planning.  We were hauling trailers behind our trikes.  Nothing hurt because those trikes are comfortable! We were staying in motels so we were not hauling tents, but I had my laptop.  We were exhausted after 80 miles and we decided to stay an extra day to rest up.  And George kept saying, "I am not doing this again."

We were by ourselves and could change our plans on a whim.  That isn't the case on these organized tours.  You gotta go the miles they tell you to go.  Another thing about that trip was I had the comfort and security of George with me.

I already told you I was exhausted by the time I arrived at the campground on Monday night.  Did I tell you I was only able to sleep three hours?  Beside the buzz and bite of mosquitoes, I missed having two nice pillows.  One is used for my head and one is placed between my knobby knees so my knees and hips don't hurt.

I packed one tiny pillow in a stuff-sack because, well you just don't have room on a bicycle for everything you want.  As it was I was stretching my panniers to their limit.  I thought I would use my down jacket for the second pillow.  By the time I realized I had left it in my bike bag, I had already let way too many mosquitoes into the tent.

In the morning (Tuesday) I was up and packing at 5:30 a.m.  There was a chance of rain on Wednesday (64% chance).  There were more waterfalls in the area.  I had intended to stay or stay close by and go visit a few. But I didn't want to volunteer to see how learn how to pack up my tent or set up my tent in the rain.  The tent has a screen top before I put the rain fly on.  How does one do that?  I read about a tent where you put the rain-fly up first and then the tent underneath it out of the rain.  But I have spent enough on this bike tour experiment, I am not going to get a different tent!

As I was packing I pondered going further north, but I was a bit spooked by the previous day's experience and the lack of cell service made it difficult and time consuming to map my way to anywhere.

I used my camp stove to boil water to make coffee.  I am pleased with my camp coffee maker.  A sack that is propped up over my coffee mug.  I sure hate to decide I don't like this after getting some pretty nice stuff for this kind of adventure! 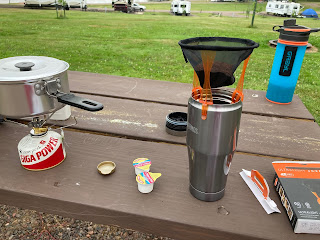 I decided to head back toward Villas County.  First I had to find breakfast.  I am used to riding without breakfast, but my body (mind?) was wanting to start the day with fuel and human contact.

I pulled out before anyone else was up.  I wished I had been able to chat with more folks.  This campground was open and the people were easy to have little chat's with.  Laura and Dontien my neighbors were still snuggled in their tent.  I thought about leaving them a card, I realized my contact cards were stored in a pocket inside my pannier.  It was too much work to pull them out.  I will have to move some to my front bag next trip for easy access.

I headed for a breakfast restaurant about 12-16 miles south in Marinesco, MI.  Once when I noticed I had cell service I responded to a text from Connie and Jerry by calling them.  That was fun. 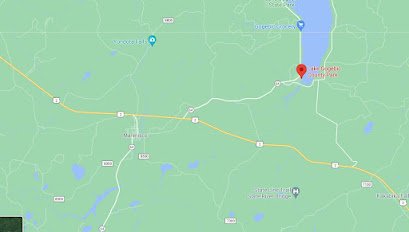 As I pulled into the city, I crossed a bridge and saw an Eagle in a tree not far.  I stopped and walked back to get a second look.  Wow!  "This is going to be a better day," I thought. Yesterday I had only seen one deer, crows and robins, squirrels and chipmunks.  Nothing as impressive as an eagle. 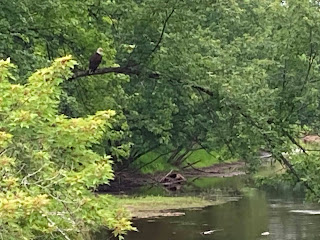 The iphone I have doesn't take such great pictures, especially when I zoom in.  I use it to grab memories, not make art.  But it would be nice to have the ability to do both.

After the bridge I enter town.  I have three cell phone service stripes!  I look for the restaurant.  Closed on Tuesdays.  All the other restraurants were bars and not open until 11 a.m.

I mapped my way to Presque Isle and began riding again. 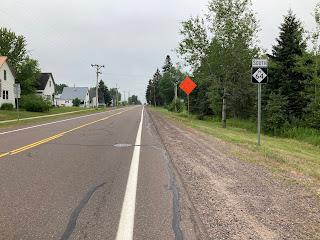 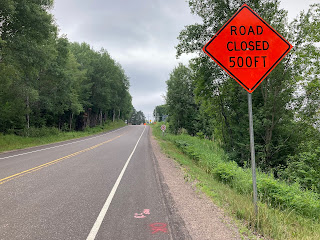 "Not a repeat of yesterday!"

I turned around and found a cluster of homes with barking dogs, rusted out trucks, and a few Trump 2020 signs and an "F___ Biden" sign.  A young father was outside with his son.  I asked about the road block.  He said it was open all the way to Presque Isle.

I began riding again and saw a turkey with some babies.  Again, I thought, well maybe this is going to be a better day.

A nice smooth and low-traffic ride all the way to Presque Isle.  I rode 17 miles to get to breakfast.  It is a good thing I took the time to make my coffee before I left.

I got to Presque Isle.  There was construction there.  I stopped at the chamber and asked where I could get breakfast.  It turns out the Supper Club I had found on Google only serves on weekends.  There are no breakfast places open on Tuesdays.  I asked about a convenience store or gas station.  Yes, they had one of those.

I had to walk through the construction area to get to it.  An orange, two cheese sticks, and a granola bar, I was now fueled and ready to ride some more.

I still had not decided for sure where I was going.   My next destination was Manitowish Waters, where I had been before and I knew there were restaurants there, choices.  And I really wanted to sit down with food and beverage and WiFi access to let all of you know I was ok.  I kept wanting to get closer to Lilac so I wasn't strapped with doing another long day.

I was mighty proud that on this hilly back road out of Presque Isle, fully loaded, I made it up most the hills without having to walk or turn around to shift.  And proud that I passed a young (30ish) woman on a road bike with padded shorts trying to keep up with some guy.  I passed him once too, but I think he was slowing down for her.

The first restaurant in Manitowish Waters that I stopped at, I got off the bike when a man yelled at me that it was closed.  He was the owner and came over to tell me that they have been super super busy this season.  He ran out of food on Sunday.  But he is closed Mondays and Tuesdays to get other stuff done around the place.  I asked him if there were any other places open.  He pointed across the lake to a place he called Pea Patch.

The Pea Patch had WiFi, they were super buzy and told me it would be 40 minutes before I got my food.  "No problem," I told them. 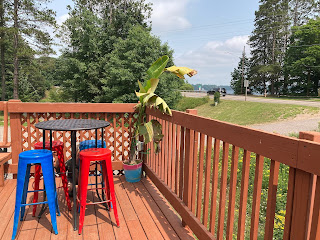 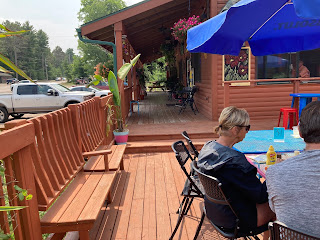 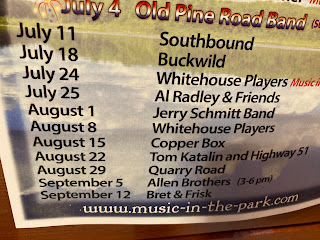 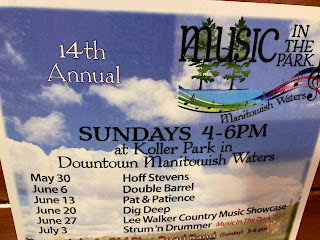 Pizza and Salad and beer.  I decided to go as far a Boulder Junction and get a motel room.  As I rode I anticipated clean sheets and big pillows and a hot shower.

A couple on Ice trikes passed me and I suddenly missed my trike.  I haven't been riding it because I have been trying to train my ass to ride this up-right/crank forward bike for the Pennsylvania bike tour.  Now I want to give up and go back to having fun on my trike.  Not that riding this bike is bad... at least not for the first 30 miles.

There were not motels available at Boulder Junction!  They are full up this time of year.  I went to the convenience store and chowed down a payday candy bar and chocolate milk as my consolation.  Wow!  That did the trick!  As I rode I felt good, I felt fast.  (Well, the wind was behind me.)

I had a shower, even made a nice fire.  Home sweet home.

And I slept soooo goooood!

At six this morning the alarm went off and then my phone rang.  It was my sister Mary!  She said she just got done reading my blog post and she would come get me if I needed rescue.  It was wonderful to hear from her.

Later this morning a man stopped by my camp.  He said he and his friends were concerned when they didn't see me and were going to call the police if I didn't come home soon.  It is nice to be noticed.  I told them I had told the campground host when I checked in, but the campground host waved me off.  He doesn't care what campers do.

Anyway the man that stopped by chatted for a while and invited me to join him and his wife and the couple across the way for the campfire tonight.  They are making Jiffy Pop.

It is time for me to stop typing.  This has taken all morning and into the afternoon! Of course I stopped to eat and clean and do a repair.  But now it is time to go ride to a liquor store or something and get something to share around the fire tonight.

Thanks for all the comments and support on these posts.  They mean so much to know you are there and watching.

Hello! Each time I write to you I have to read my previous post to see where I left off.  This time when I read the last post, I was thinki... 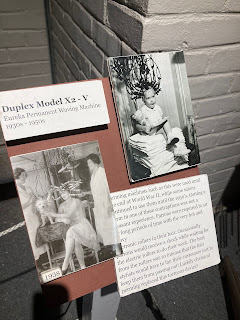