The Dam Is Broken - Decisions Flow!

I am really surprised at how easy life and decisions can become once you decide on a path and start down it.

I still agonize a bit over decisions, I still hit major obstacles.  But wow, I have made some major decisions (to me) and I don't feel a lot of regret or angst.  Isn't it a hoot that at 66 we can still get a thrill out of life's challenges and twists and we still struggle and worry for naught?

Of course it helps to have supportive folks offering to help.


Speaking of worry and stress...

A fellow biker told me about a book she is reading by Mayo Clinic.  Guide to Stress Free Living

The biker said she is always doing something and she didn't feel that Thai Chi was as good a meditation as doing nothing.  Yet she doesn't like doing nothing.

I have been saying "no" to some things I want to do because I need to have some down time.  Balance is what keeps me healthy.

I want to do so much, but my parents and then George were the ones to hold me back from doing too much.  Now I miss the George activity regulator.  I have to be wary and monitor myself and say "no" though I want to say "yes" to it all.

What do you do to reduce stress and keep healthy?


It has been over two years I have wanted to find someone either part-time or full-time to share my home with.  Recently I got an email from a Warmshowers.org member.  She is from South Dakota and isn't traveling by bike but was staying in Florida for the winter and was looking for an "affordable" place to stay for a few months.

Now she is my house-mate!  And it is working out great so far.  She is pleasant, and quiet, clean and polite.  AND she rides a recumbent tricycle!  She even agreed to stay in the upstairs bedroom until after the trike rally because I already had booked a couple rooms with guests that I was excited to see and host during the rally.

For the next week this place is going to be buzzing.

There are new residents and trike riders in Inverness.  They have all moved into the same neighborhood.  I call it Trike Town.   The group invites their friends that ride trike each year to a trail and have a little rally.  There is about 10 to 12 couples in all, usually.

This year their rally takes place on the Withlacoochee.  Most of the rides starting from the Central Motel where many of the attendees will be staying.  They named the rally "THE BIG HONKIN' TRIKE RALLY" and put in "public" mode on Facebook.  A few shares and weeks later and they are surprised that they may have well over 70 people at their little rally.  And that is just the people who contacted them.

As we were discussing where to park the cars for one of the dinners they were hosting, we laughed and mentioned it might turn out like Woodstock - miles of cars and not enough bathrooms.  I will be posting pictures here once the dust settles.  No sex on the lawns please... no dropping acid either.

I am excited because my new friend I met in Xenia, Ohio this summer, Linda, is coming to stay at my house.  She is a trike-rider, joy-spreader, hiker and travel lover and former truck driver.  We is going to have some fun! 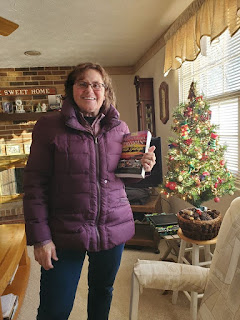 My long-time friends, Rolf and Barbara are also coming to stay here too.  Our home will be party-central for the week of the rally!  Many recumbent enthusiasts know Rolf and Barbara because they owned the Hostel Shoppe in Stevens Point, Wisconsin.  For many years they hosted the Midwest Recumbent Rallies.


I made a decision on a trailer to live in this summer while up in my seasonal campground spot near Rhinelander, Wisconsin.

A man in Tampa (I will call him Steve) had ordered a WEEROLL from the factory.  He was going to use it to haul his motorcycle and camp in it.  Then he got in a motorcycle accident and decided he wanted to be on a motorized vehicle with four wheels instead of two.  So he needed a bigger WEEROLL.  He put his WEEROLL, that was under contract with the manufacturer, up for sale. 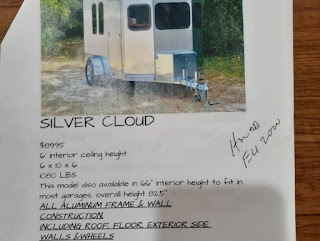 My friend, Debra, who is anxious to have me as a camping buddy, forwarded his ad to me.  I called him with questions, thought about it, and called him back ready to move forward.

Mostly, at least to start out, I will be in campgrounds with electric hook-up and showers and bathrooms.  So I don't need a bathroom in my unit to maintain.  (The less to maintain the less that can go wrong.)

The WEEROLL is a well-built utility trailer with insulation, windows, and electricity.  It is simple, cheap, and versatile.  The furniture is not fixed (unless I attach it to the walls), so I can change it out if it doesn't suit me.  The WEEROLL empty is about 1100 lbs, which is well below the 3500 lbs that is what my van can tow.

The A-LINER is also well built but has fixed furniture.  When I talked to a dealer about making changes to the interior, he said they don't do that because it can mess with the integrity of the structure.  I felt the A-LINER had uncomfortable seats and I wouldn't have room to add my own chair and table to write and work on rainy days.  The advantage of the A-liner is that it would provide less drag and I could get one with a sink and fridge.

Because of the shape and folding of the A-liner, I could not add an attached awning to it.  I have learned from camping with others and in the rain, that an awning is very useful.  Especially on rainy days.

I liked the freedom to change the Weeroll with ease and the price was right.  My friend Debra also had a Weeroll on order.

Tom is the owner of the Weeroll factory.   When we arrived he pointed to a trailer all completed except for the windows right next to us.  That, he said, was our trailer. 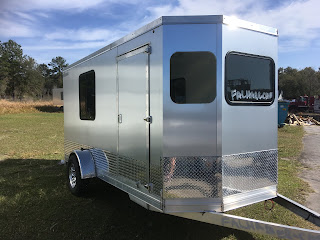 After looking at the trailer, we went to Tom's office down a huge-dark hallway.

Tom was all in a dither because the manufacturer of the windows he uses in his trailers is behind schedule and his whole production line is held up waiting for windows.

In the middle of the meeting to switch owners of the contract Tom mentioned he needed to eat, he was borderline diabetic.  I pulled out a banana, a fig, and some nuts from the bag I brought in case our meeting went on way past lunch.  Tom grabbed them gratefully and inhaled the figs.  Shortly after Tom ate he was a calm person, the "dither" disappeared.  Life was good again.

Anyway, I ended up writing a big check.   I now own a Weeroll, though it is still at the factory waiting for windows.

Debra got to see her trailer that was 1/2-way completed.

As we were driving away from the factory, Frankie, who was sitting in the back seat said, "I can feel the tension coming from you two in the front seat."

I looked over at Debra, she sat looking forward, eyes wide.  Debra and I both were feeling apprehensive.  I had just written a big check and wondered if I was doing the right thing.  Debra said she had a pit in her stomach.  We both knew in our gut that decisions and changes don't always go without hitches.  We were waiting for the other shoe to drop.

Today I got the contract in the mail from the campground in Wisconsin.  It turns out they have requirements that all the trailers and RV's that stay there be RVIA compliant.  What's that?  I wondered.  I looked it up and discovered a discussion among those trying to camp in converted vans and utility trailers and tiny homes.  They can't stay at many campgrounds because their rig or type of rig has not be RVIA certified.  SKITTLES!

This is an organization of RV manufacturers and dealers not wanting less costly items on the market and being used.

I text Debra, she calls me, we cuss a bit and decide not to panic yet.  We will make some more calls to campgrounds and see where we might be allowed to stay.

I call my sister.  She tells me it's no problem because I can stay in their yard.  They are outside of the city limits.

My vision of being in a seasonal campground surrounded by friendly and long-term campers that create some kind of supportive and fun community is dashed.  I wanted regular neighbors, I liked the idea of a laundry room, pool, beach, and being able to bike to town.

The last thing I wanted to do was impose on, or add stress to, my sister's life

Back to the drawing board to create a new vision.  I will keep you posted.

The Mayo clinic explains clearly the question that people always ask me,  "Is dementia different than Alzheimer's?"

"Dementia describes a group of symptoms affecting memory, thinking and social abilities severely enough to interfere with your daily life. It isn't a specific disease, but several different diseases may cause dementia.
Though dementia generally involves memory loss, memory loss has different causes. Having memory loss alone doesn't mean you have dementia.
Alzheimer's disease is the most common cause of a progressive dementia in older adults, but there are a number of causes of dementia. Depending on the cause, some dementia symptoms may be reversible."

Last time I posted I mentioned I was nominated for book cover of the month and asked you to vote for the cover of THE JOURNEY CONTINUES. 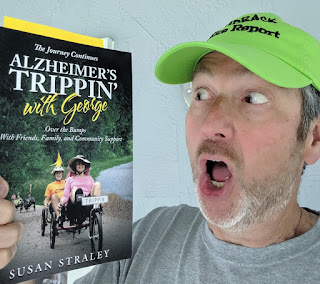 Thank you to all that voted I got enough votes to make it to the second round... the Tandem Trike was in the top 100 covers!  Votes are still being made and they are letting people vote more than once.  Last I checked we were at #46!   Not number one or two, but still...

I am proud of the cover, our active lives, and grateful to you for your votes.  Thank you!

You can still vote!

And guess what!  The ebook version is on sale this month for $2.99.

Scott Martin writes: "Sue is so down-to-earth as she teaches us what really matters in life. Her love for George is an inspiration." 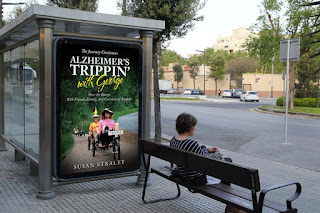