Decision Freeze and Then BAM! Shazam!

STUCK IN THE WHINE


I want to warn you, this first part may sound whiney.  I have a little kid that sits on my shoulder and whines on and on and on.

But before I talk about that and lose your interest, please vote!  No, this isn't a political plea.  My book cover was nominated for cover-of-the-month.  And I need folks to vote for THE JOURNEY CONTINUES.  Click here and vote.   I think we only have a few more days to vote, so do it now. 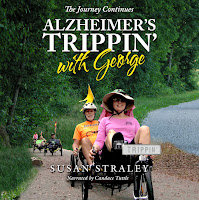 Ok, now back to my indecisiveness and the whiner on my shoulder...

Decisions sometimes come hard.  I was talking with a fellow Dementia Diva Widow and she said she is lost, she just doesn't know who she is or what or where she wants to be.  I could relate.  I heard in her voice the echo of my whine.

This feeling is very familiar to me.

Some people try something in sixth grade and know that thing is what they want to do for their career.  For George it was Drafting Class in High School.  He got an A, it was an easy A, that was his sign.  I never got a sign like that.  Or maybe I did and was too daffy to recognize it.  Or the inkling got squashed...  maybe I let something someone said influence my decision to go a certain way.

I don't know, but all my adult life I have only a few times felt strongly that I was doing what I should be doing.

Of course one of those times was taking care of George in his last years.  Another time was when I was working for a non-profit on women's rights.  I felt driven and full of purpose for the 4 or 5 years I worked there... until I didn't anymore.

The summer after George passed and I was working to turn our story into books, I also felt very driven.

Did you get a sign about the direction you were going to go at a young age?  Many have.

So now, here I am, thrilled that I am at least comfortable enough and well enough to have choices, but hating to have to decide.  Saying yes to one thing means I am saying no to so many other things.  If I say yes to travel it means I am saying no to activities happening and people I love at home.  Yes to travel means no to a job at home and could possibly hurt my financial well-being in my ancient years... if I have ancient years, if not my ancient years then my financial legacy.

If I say yes to a job while I am traveling, it takes away from the freedom of the experience of traveling in some ways.  Spontaneous gatherings would have to be planned around work hours.  (Shut up you whiner!)

Maybe I have trouble saying no to anything, because I love so many people and activities.  I want to be around with this person more and that person more.  As my life moves on and my social circles expand, I find that the time I get to spend with each person isn't enough.

And besides spending time with people, I want to ride trails and roads, I want to write, I wanna...

Today was one of those moments.  I suddenly saw with clarity that my sister is who I want to, and who I should be, spending more time with this year.  And if I want to jump into camping life, what more comfortable place to do it than close to family and friends in Wisconsin where George and I lived for almost 30 years.

I started looking at campgrounds up around where my sister lives in Rhinelander, Wisconsin.  I found a few, she pointed out one.  I called them to ask questions and before I was off the phone I had made a decision!  I reserved a seasonal spot in the campground for this summer.

When I got off the phone I wanted to cry.  I had been struggling so long and suddenly I just jumped in and made a decision and it felt right!  Oh my!


I don't have a camper yet, but I have settled on two that are light-weight and roomy enough.  They can both be towed by my current mini-van.  And my trike and bike can fit in the van and go along.

The two trailers I am looking at are the WeeRoll and the A-liner.

A WeeRoll is an insulated utility trailer with windows.  I will have to buy furniture and figure things out with that.   The WeeRoll could hold my second bike while traveling.

I am also looking at an A-liner.  This would have a built in sink and cabinets and fold down for less wind resistance when traveling.  It would be easier to have ready for me to use.

Both are less than 1800 lbs.  My mini-van has a limit of 3500 lbs.  They are about the same price... well before I add furniture to the WeeRoll.  The WeeRoll will have more room inside.

Decisions when you have a partner can be harder because you have two people to please, you have to compromise and sometimes be frustrated because you don't agree.  So I guess I shouldn't complain about making decisions on my own.

Though I would love it if any of you with knowledge of campers and shopping for campers and decorating campers can go with me or guide me in any way.

WHAT ELSE IS HAPPENING


Now that it is winter up north, I am getting more visitors here.  All so far have been from the Affordable Travel Club and from Warm Showers.  Tonight I have Robb Freed who has biked across the country from ocean to ocean four times in the past two years.  He is doing it to raise awareness and funds for a rare disease that killed his infant son.

The first book in the Trippin' Series is still in the Top-10 in sales for two categories of books on Amazon.

And the nice reviews keep coming.

The Journey Continues is now up on NetGalley available for reviewers and book bloggers to read a free copy and leave a review. 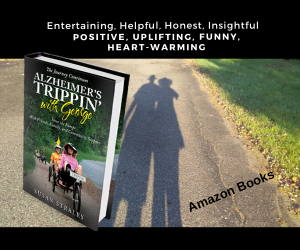 I spoke at the 6th Annual Coping with Dementia Conference.  My friends Debra and Glen and Connie and Jerry were there.  Debra came up to me after my speech all shiney-eyed and said I did great and gave me a big hug.  So nice to have them there!  And one of the Dementia Divas was there too.

Here is Debbie Selsavage whose organization, Coping with Dementia put together the event. 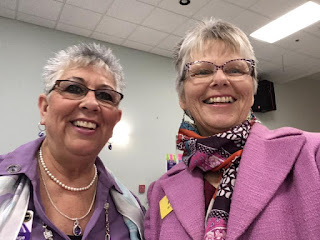 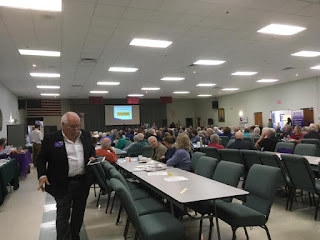 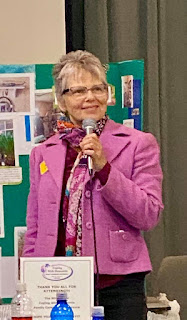 I was trying to take a selfie with Connie and Jerry but my arm wasn't long enough.  The woman sitting across from them kindly offered to take the picture. 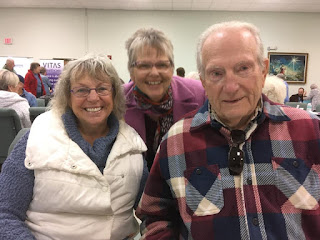 The George tandem was there by special request.  I told the story of George's love for riding trike and how that love kept us both involved and active throughout his illness. 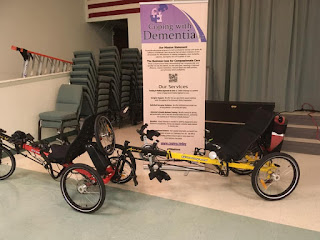 There was a musician there, Earl, that plays with Paula's Pure Vintage band.  He has been living with Alzheimer's for years and still plays and sings.

There was a man that lives in an assisted living home and loves plants.  He took the plants that were dieing and made them bright and happy again.  So now he has a whole garden in the back of the home where he tends plants.  Since finding his passion again he has become a much more cooperative and easy person to assist with his tasks of daily living.  Maybe that was why George remained sweet throughout his illness.

These were inspirational stories all on the theme of finding the person that still exists in spite of the illness.  George's passion for triking and love for old cars and love for me shined through all the way.

I took a picture of the trikes inside the mini-van.  Yep!  They both fit with room to spare. 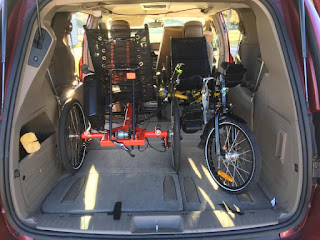 At the event, I sold about four books and gave away two and donated $10 to Find-m-Friends (the blood hound training program to help locate lost persons).

The next day I attended another conference.  I didn't speak, but I gave away two books and sold two books and re-connected with my former boss,

In March I am flying to Arizona and this week I took my two-wheel cruising bike to the bike shop to get it ready to fly.   I needed some bolts un-frozen and some instructions on how to box it up and ship it.  I decided not to try to fly my trike, but to cruise around on my bicycle.

A few days after I posted my last blog the guy was on my doorstep wearing a lovely white tuxedo.  He was off to dinner in St Petersburg, he said, and he stopped by to pick up his book that he left with me.

I searched for it and finally found it in the den near the front entry.  I keep boxes of my books in the den.  When I handed him his book he asked if I liked it.

Then as I started to explain that it wasn't my type of book and that it jumped around too much and wasn't edited well (or at all).

But he started talking over me right away. "Not enough sex in it," he said, "That's what the ladies say, not enough sex."

He looks at the boxes, "What do you have in there?"

I proudly show my books.

"No," he says as he continues to lay on the praise.  I escort him out the door he says, "No, really, its a good book!"

Today he stopped in his car as I was walking over to feed Ted.  He asked if we could go out for coffee again sometime.

"No," I said, "We have nothing in common.  You will find someone that fits you better than I do.  Keep looking."

After some more pleasant conversation we went our separate ways.

Some decisions are easier than others. 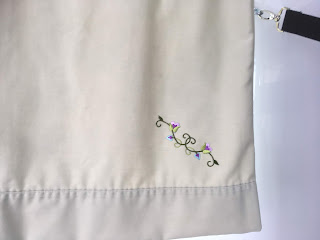