It is Thursday, October 17, 2019 and I am writing this from a McDonalds in Key Largo, Florida.

I like going new places and being surprised by new sights.

I last wrote from a Starbucks in Miami.  Then I thought I only had one more night at the Everglades campground.  I was mistaken.   I had two. 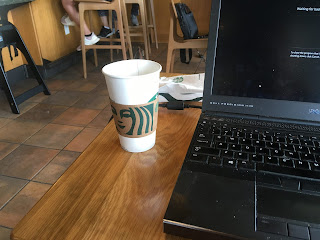 
I like sleeping in my tent cot.  I am outside so much.  If I wake up in the middle of the night I can see the stars and listen for any sounds.

I expected the Everglades campsite to be full of sounds.  I expected a shrill of frog calls and the rustling of bushes and the rumble of gators.   Crickets, I heard crickets and an occasional air boat in the distance.  In the early mornings I heard trucks that seemed to thunder across the Everglades on the Tamiami Trail in the early morning hours.  I didn't see a lot of trucks when driving that road.

The one downside... or maybe two, to sleeping in my tent cot.

Sometimes I wake up and there is no breeze.  I am covered in sweat.  I have to get out and move around to get cooled off.   Fortunately the bugs aren't too bad in the middle of the night.

I think about hanging a little battery operated fan, but how long would that work?

The second reason my set-up isn't ideal right now is that when twilight comes, the bugs come out, and I have to go lay down in the tent-cot to get away from the bugs.  I have tried spraying myself and staying out, but I can't spray enough, they still buzz around my ears and get in my nose.  So I go to bed shortly after the sun sets.  I read by flashlight.

I have clusters of bug bites on both knees.  Why the knees?  I figured it out.  Sometimes, when curled up in my tent, my knees set against the screen of the tent cot.  Those buggers are biting me through the screen.


The thing about traveling and blogging is I don't have much time for anything else.  I mean I didn't spend time and attention to see where my fellow Shark Valley trikers were going next.  I had made my reservation at the Midway Campground and that was where I was going to stay.  It turned out that they were biking probably an hour or two away.  I COULD have joined them on one of their rides.  If I WOULD have taken the time to map their starting location.

After leaving Starbucks I drove back toward the campground and stopped and rode the Shark Valley Trail one more time.

During our moonlight ride the night before I was at the front of the pack and kept having to wipe cobwebs off my face.   When I pulled my trike out it was covered in sticky cobwebs from our night-time ride. 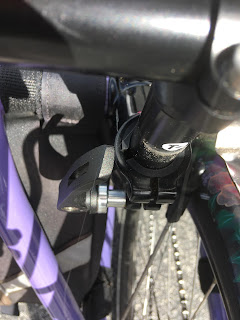 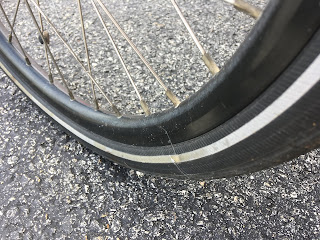 My first impression of that trail when we rode it in ... what, 2010? My first impress was that there were so many gator on it.  I remember standing on the tower and looking down.  In the grass around the restrooms there were huge gator.  Probably seven to 12 of them scattered around the tower.   Now no gator.  If you want to see gator, choose to come during a drought and in March or April.  April is mating season.

During my ride this day I decided to return in February or March with friends. 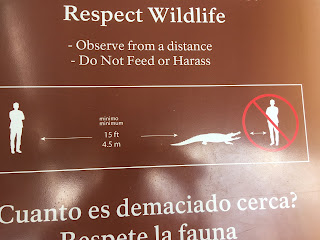 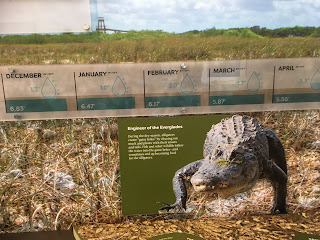 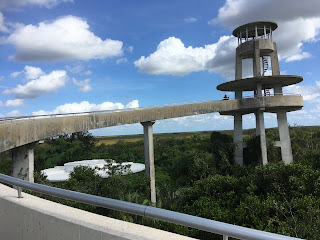 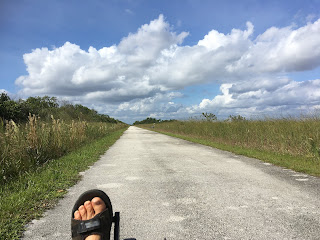 At the parking lot a woman stopped me and asked if the trike would be helpful to her.  She is going blind and has had to give up riding because she can't see the flaws in the pavement.

I told her this kind of trike would keep her from falling.  I also said that she should get a trike with one wheel in front that she can hook onto another trike.  If her husband rides she can keep riding even after her eye-sight goes.  She was thrilled at the prospect.  Though she has some work to do convincing her husband, he was not at ALL interested in our conversation. 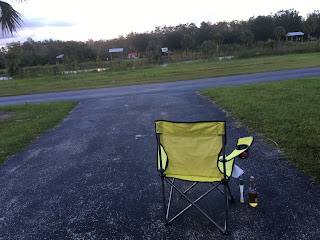 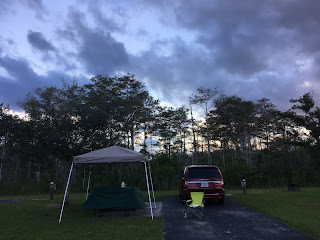 Back at camp, I saw a guy walking around the campsite with a nice camera with a telephoto lens.  He was taking pictures of birds and showed me a few of the lovely little things.  It amazes me that someone can capture a still of those small birds that are always moving (flitting).

He was wearing a shirt that said something about "python hunter".  He is a government contractor that hunts the big snakes in the Everglades.  He says that hunting in the winter is much easier.  The snakes go to pavement at night to get warm.  So in the winter he hunts at night.

A Gift of Another Day


I had fully expected when I woke the next day I would be packing up and heading to the Keys.  But I woke and the phone told me it was only the 15th of October.  I had another day!  At first I was disappointed.  But then I realized, how often do you get the gift of another day?

What was I going to do with it?

I decided to drive to Naples.  Take a shower and work out at an Anytime Fitness.  There are no showers at the Midway Campground.  I have been taking sponge bathes and washing my clothes in the bathroom sinks. 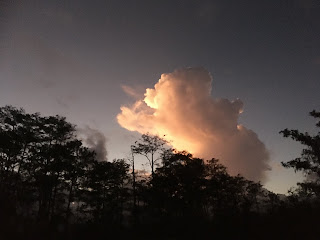 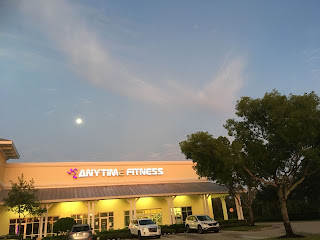 I arrived at Anytime when the sun was rising. 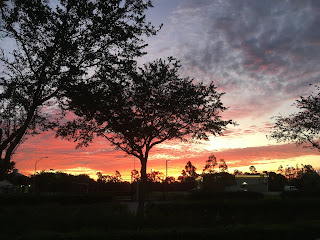 A lovely shower first.  I hung my clothes in the van before starting my workout.

After Anytime, I drove near downtown, parked, and got out my bike.  I took a picture of the intersection in case I needed it for finding my way back to 7th Street and 9th Avenue.... or was it 7th Avenue and 9th Street? 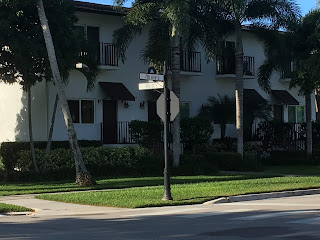 Before I left Inverness, I had bought a mirror to replace the one that fell off.  Since I have the gift of an "extra" day, I took the time to find some shade and put on the mirror. 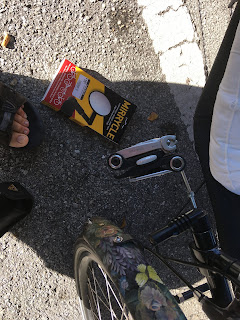 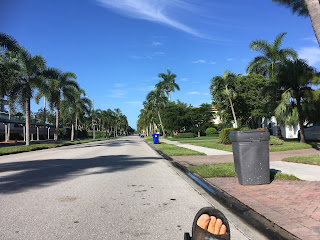 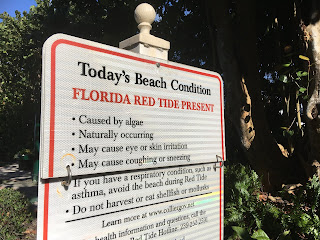 My idea to walk the beach was squashed by two things. It was getting very hot already in the sun and this sign made me worry about wading in the surf. 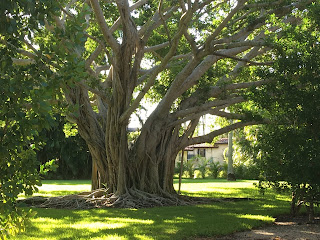 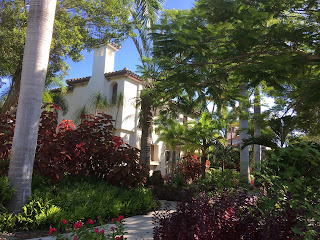 Instead I toured some of the back streets, the used google maps to find a buffet.  I was hungry and the scale at Anytime told me I had not gained on this trip even with all the eating I felt I was doing. 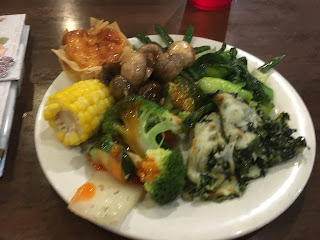 I spent the rest of the day working to apply the edits from the Editor to the Kindle version of The Journey Continues.  It will launch December 4th and I have to have it up-loaded at least a month in advance so that people can pre-order the book.

I left the library a little after six p.m.   I was driving the Tamiami back to Midway Campground when I saw the sun shining on hundreds of white ibis in a tree by a bridge.  I quickly pulled over to grab a picture.  I ran back to the bridge because the sun was already gone and the light was fading. 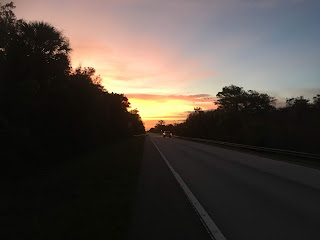 As I approached the bridge there was a huge splash.  Obviously a BIG gator was startled by me. 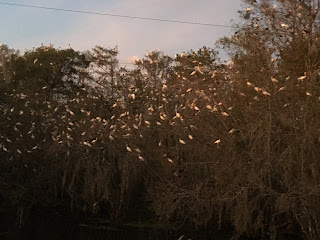 I will add a video later. 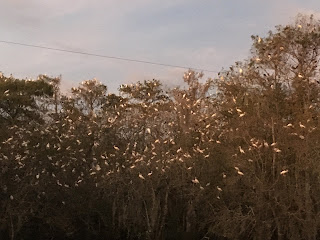 But right now the sun is coming up here in Key Largo and I want to snorkel at the beach a bit to get more comfortable before I jump off the boat into deep ocean water. 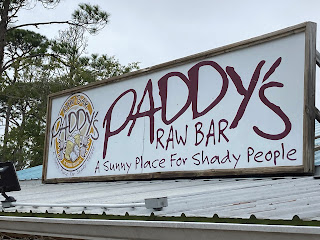