I should have known.

I kind of knew.

Sometimes I lay out on the bed the clothes that I want George to put on after his shower.  I stay in the shower after I wash and rinse him.  He goes out, dries himself and gets dressed.

So when I laid my pants on the end of the bed, I kind of had a nudge in my brain that that wasn't a good idea to leave them there. 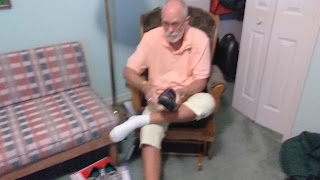 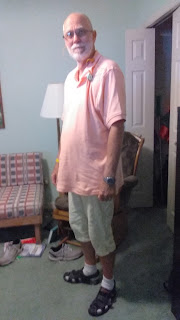 After his shower he put his bike shoes on instead of his tennis shoes.  No big deal.  When I tell him he has my pants on, the words do not register with him.  He just smiles and does his nervous, teary laugh.  He wore my pants for the rest of the day.

On Saturday after our bike ride I got him undressed, glasses and watch off, and into the shower.  Then, like I have done in the past I rush to get things ready for when he gets out.  I might set his clothes out, I get a fresh towel out and place the old one on the floor.  I get myself undressed to get in the shower with him to wash all the places he forgets to wash.

I have to make sure the dirty clothes we take off get in the hamper or he might try putting them back on.

I placed the items in the hamper and turned around and there is George out of the shower already and trying to put his depends on while dripping wet. 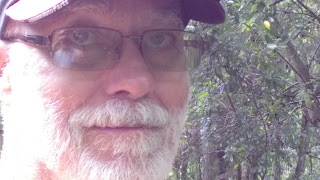 He is agreeable, though he looks at me like I am crazy, when I take him back into the shower to wash his head and face, arm pits, butt and back of his legs.  Then a new routine starts.  Instead of me staying in the shower to wash myself.  I follow him out.  We are both dripping wet.  I dry him off and coach him through getting dressed.   I grab a robe and put it over my wet body and take him to the living room.  I set him up with a movie to watch.  Once he starts watching I keep my fingers crossed that the movie plays through smoothly.

Now I can go take my shower.  Whoo hoo!

Each time I go to training I come home with more knowledge and a pile of STUFF!! 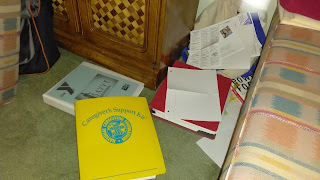 My den is getting quite cluttered and when I think I will clean it, I get distracted.  Either with email or phone calls or George saying, "Wanna go do something?" 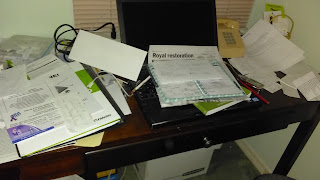 On Friday last week I paid for a day at the Key Training Center so that I could attend a Caregiver Training.

Debra Selsavage spoke in the afternoon and I picked up a few tips on dealing with someone with the anxiety or anger that sometimes presents in people with Dementia.

1) Never touch the person from behind.  They are easily spooked and can lash out when surprised.  It is better to get in their line of vision (which is narrow).  Get your eyes at their eye level and smile.  Approach them in a friendly manner.   Reach out to shake their hand, but instead of taking their hand take their thumb pad so you are each holding each other at the base of your thumbs. 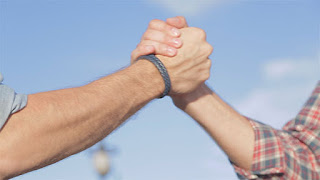 Once they know you and accept your touch, you can keep your hands on them.

Sometimes they can grip but don't get the signal to let go.  I have seen George do this when shaking hands with folks.  He grips hard and doesn't let go.

2) Enter their fantasy.  If they are afraid of what they see, chase that imaginary thing away for them.  Empathize with them.  If they thing someone hasn't come to visit them, and they did visit.  Just agree, don't argue. Empathize with the feeling.

She said that language is on the left and that the left side of the brain shrinks the most.  She said that swear words and music are stored on the right.  George doesn't swear... yet.  He does like music.

George has lost a lot of his language skills.   I usually give him two choices.  Sometimes I can tell he isn't choosing, he is "parroting" the words he heard.  In that case I choose for him.

I try to keep my requests to one or two words.  "Pants, Down"  "Sit Please"

A technique I have been using to get him out of the trike is to say "Forward, Forward, Forward" and I place my hand on the back of his shoulder and nudge him forward.  So he bends forwared from the hips.  This takes the weight of his upper torso off his hips so he can lift his hips.  Once his legs are almost straight, he can lift the upper torso.   Debra demonstrated this technique at the workshop.  Hmmm.

He is still telling people he has dementia.  I was on the phone with our friend, Jane, and George walked in the room.  I handed George the phone and he said, "Hi." and then "I have dementia" and he started to cry.  So he knows, he knows.  My poor friend didn't know what to say.

The tears and the thought didn't last long.  After the call he was ready to "go do something". 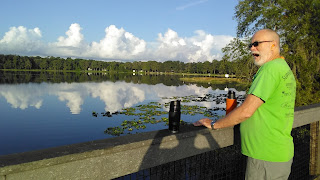 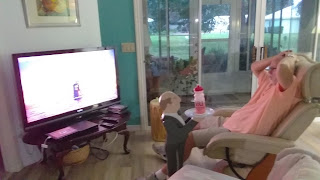 Debra Selsavage gave out a sheet with "Ten Essentials:"

And I will add here, Never expect yourself to be perfect, do what you can and take care of yourself.

Glen Campbell passed this month after living many years with Alzheimer's Disease.  If you haven't seen the documentary about his journey, it is interesting.

**************
We all got "fidget mats" at Memory Lane a few weeks ago.  A fidget mat is a lap blanket with pockets and zippers and strings, and stuff to fidget with.  Even little stuffed toys are attached with a string and stuffed in the pocket.  In the late middle stages fidgeting is common and this keeps their hands busy and calms them.

In fact, now I have come to the conclusion that I need something interesting to put in George's hands when I am cleaning him up after a messy bowel movement.  It might keep his fingers from spreading the mess.  Something plastic and easy to clean.

George stopped doing puzzles recently.  Even the 24 piece puzzle seemed too hard for him at times.
Other than TV and coloring, walking and biking, what can I have him do that doesn't require I sit there with him?  I started asking around and got some ideas.

Jodie (George's daughter) called and suggested a job for George.  There is a video online about a man with Alzheimer's that was worried.  He had to get a job.  He had to get to work!

So his daughter told him she found a job for him and he would get paid $5 a sheet.  She then placed a sheet of bubble wrap in front of him and told him he was to pop each bubble.  He was thrilled with his job and spent several hours a day popping bubbles.

I have asked our friend, Wilma, who heads up "The Happy Hookers" in our old neighborhood if she had yarn he could put into a ball.  She said she will have "work" for him the next time we visit.

I also have a case with 4 rows of different colored poker chips.  Occasionally I dump them in a bag and mix them all up and then I ask him to sort them out and put them back in the neat rows in the case for me.

A friend at Memory Lane suggested taking 5 to 7 decks of cards.  Marking each deck with a number.  Mixing the cards up and having George sort them.  Doesn't matter if he gets it right, it is something to do.  So I am trying that, he has a harder time with that than with the chips.  He keeps turning the cards over to look at the face and then getting mixed up.  Maybe next time I will have him put all the aces in a pile, all the kings in a pile, and see how he does.

Not!  However, I have been constantly reminded in caregiver training and with conversations with those who have taken this journey before me.  I need to do things that will keep me healthy and will help me find who I will become without George filling my days.

I am trying to do things to take care of me.

Speaking of reaching out to friends.  Sunday we stopped in at a friends and we managed to get George in a kayak that I tied to mine and we went kayaking.  I made sure he had on a life jacket.  Who knows if he still knows how to swim.  We saw 3 otter, fish, turtles and birds.


No wonder I have a messy den.  Time to get off this blog and start to find places for all the stuff I got laying around!

Thanks for journeying with us.

July 9, 2020 Hi there!  I made it safely to Madison, Wisconsin. I am sitting writing this in Kathi's den.  She has a separate window... 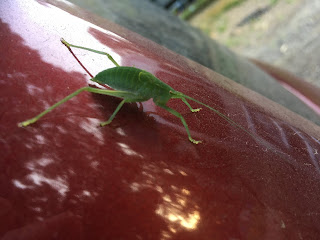