The rain is often an invitation to go out and dance.

Unless it is cold.  It is hard to stay warm when you are wet.

Yesterday I read that Inverness, Florida has had many days of rain. And I thought, boy am I lucky to be here, the weather has been great!

It started raining today around 11:00 a.m.  Now it is three in the afternoon it looks like it is going to continue through the night.

There is music in town this evening... outside.  I think I will stay inside.

I have not moved forward on book three since I got the edits back from my beta readers.  Today would be the perfect day to get going on that.

And I may start today.  Though I have the whiny girl on my chest stamping her feet and saying, "I don't wanna do that!"  What is that about?

I read what other people have written and I feel unworthy to put my thoughts on paper.  What am I thinking to expose my crude thoughts and language to book readers?

I know I am not supposed to compare myself to others, but isn't that what you do in sports to get better, to set goals?  I don't know, I usually quit competitive sports when I am not winning.  When we were younger my  brother used to tease me and say I would stop playing a card game or a board game if I didn't win once in a while.  Yes, and now I am 68 and still wanting to quit before I excel.

Of course!  It isn't fun to lose all the time!

But then, it is raining all day and I am not comfortable sitting with no ambition and drive.  So instead I will sit with my beer and my keyboard and write to you.  I mean I have so much to share!

And then maybe... just maybe, I will pull out the stack of papers that are stored under my bed and start working my way through all those wonderful edits and suggestions.

Catherine Joppa that hosted the kayak and potluck event I told you about in my last writing, stopped in at Mary's when I was there.  She had looked me up on Facebook and this blog and she wanted to share something with me.

It was a framed list of words by a creative man to his sweetheart.  And he signed it by many of his identities.  Catherine said she wanted to share it when she saw my Facebook description of myself as "Monarch Momma" and a few other things.  Allen Bell signed his note, "Nature Writer, Bluebird Sighter, Butterfly Feller, Wild Flower Smeller, Plane Crazy, Kinda Lazy, Star-Gazer, Loon Praiser, Rock Picker, Shutter Clicker, Phrenologist, Genealogist." 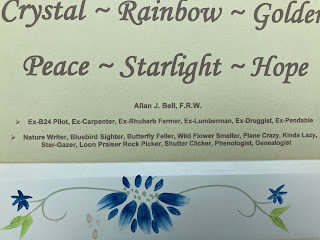 I took a picture of Mary and Catherine visiting on Mary's deck. 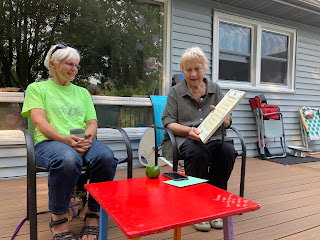 Later in the week my nephews arrived with their spouses and my ex-sister-in-law Sue and her husband Cal.  What a nice reunion we had!

The first evening we gathered at my new camp spot at Lake George. 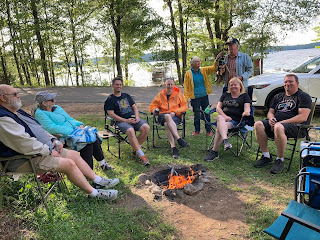 As you can see, it was cold, but the people from Florida and Minnesota didn't think to grab a coat.

Cal and Sue, my ex-sister-in-law on the left, had their jackets (with age comes wisdom), then Mike and Jack (in my orange windbreaker), standing is my sister Mary and my brother-in-law Dave, and then in black is Sara and Tom.   In the nephews' defense they did say that their campsite was warm, surrounded by trees.  We had a nippy breeze coming off the lake.

I like my new campsite!  The only thing is I have to walk quite a ways to dump my grey and black water, but there is a porta-potti nearby, so I don't have to dump as often. 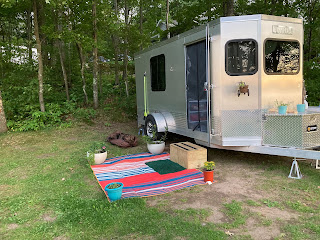 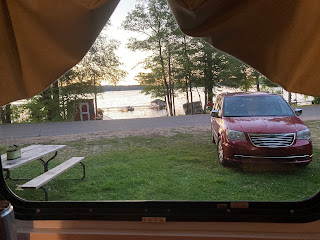 The next day I biked in the morning on my own and in the afternoon we met up at Mary's and went for a kayak ride down the Pelican River.  I saw a great horned owl flying away as we floated down. 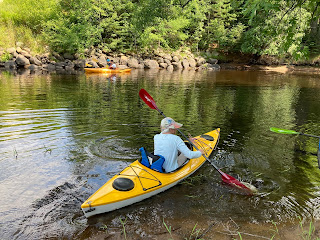 I was worried.  It was so much activity at Mary and Dave's.  With Dave dealing with dementia I didn't know how he would react to so much activity.  Mary was already exhausted from grief and care-giving,even though she wanted to spend time with everyone, I worried.

We had a good paddle and then we all went out to CT's Deli in downtown Rhinelander for dinner.  We were able to dine outside.  The weather was perfect.

Though the younger working folks still had hours of fun and socializing in them, the rest of us retired to our places after dinner.

I took pictures of the sunset over Lake George, which was just an orange circle due to the smoke haze from the many big fires in the Western States and Canada.

On the last day of my nephews' visit, we didn't gather until afternoon.  They had planned on driving to a beach, but then it was a bit cold for a whole day at the beach.  I steered them to my favorite place to swim near here, Buck Lake.

Just Mike and I braved the water and went for a swim.  I pulled out my water toys that I have been carrying with me just in case.  A couple of air-mattresses, some water guns, and a velcro-style ball and paddles.  Jack and I had fun playing with the velcro-ball and paddles.  It was so easy to catch, I felt like a real ball player.

I don't ever remember playing catch with my nephew before.  He turns 40 this October, and we finally get around to playing catch.

Sara suggested we go play mini-putt (miniature golf).  We packed up and headed to Pirate's Cove, a worn and hilly little course that had challenges at each hole... (Peg Leg Pete lost his peg.  Hit your first putt standing on one leg...)

My sister suggested a good place to dine, Al-gen's, Dinner Club.  It felt magical being inside a solid building dining with others, ignoring all COVID fears and warnings.  It took an hour from the time we ordered to the time our food arrived.  And that was ok because I was good sitting around a table with people I like and chatting.  I hope none of us pay for it.  All of us are vaccinated.  Other tables were quite a distance away.

As I got up to leave, Tom said, "Where will it be next? We have met up with you in Washington State, Arizona, and now Wisconsin."  As I was driving back to my camper I was thinking of the possibilities.

Sometimes I wonder why I am training for this ride in Pennsylvania.  Why not just do it at my current pace?  But that means doing it alone.  It isn't because I am afraid of bad things, it is that I want to chat with people.  I want to share experiences with people.  So much of enjoying an area is sharing it with others.

So I am trying to do at least one longer ride a week and a few shorter ones.

I decided to ride from Rhinelander to Minocqua by riding to the southern end of the Bear Skin Trail and then on up to Minocqua.

The first part of the ride wasn't real pleasant because it was on a busier road without a nice shoulder.  But then I got on the trail, and that was nice.  I decided not to go back the same way I came so I wouldn't have to ride that road again.

I stopped to rest at a dock that goes out over a pond and some springs that feed the Bear Skin River. I was reminiscing about all the fun George and I had with our friends over the years at this and other rest stops on our rides.  I miss that.  This is enjoyable, yes.  Sharing it with laughing friends would be even better.

I used my phone to re-route myself, instead of going to Minocqua I would take back roads to Lake Tomahawk where I knew there was ice cream.  This new route would cut the length of my ride from 70 something miles to 50 something.  Good enough.

Hurrah! I didn't run into loose gravel roads or gated roads.  Florida biking friend Bill D. recommended I pre-route my rides on a computer and then download them to my phone.  He says he uses RidewithGPS.  I have that App but I am using the free part, not the paid part.  The paid part ($50 a year) allows you to create and save routes.   Like Google I can see the satellite view of a road to get a better idea of the surface and neighborhood conditions.  I haven't bought it yet.  I wonder if Googlemaps has a paid service like that too.

As it was, the ride with the ice cream break took all day.  I showered at Anytime Fitness then I bought three impossible burgers at Burger King, and took them to Mary's where we sat outside watching a white, fuzzy caterpillar go round and round the rim of the bird bath.  Mary started singing, "Oh if I only had a brain," from Wizard of Oz.  After I was done eating my burger I decided to help the fuzzy creature. I knocked the caterpillar down onto the grass.

Then Mary offered up a Root-beer Float.  Yep, I ate two ice cream treats in one day!  OMG.  Stop me now!

Yesterday my next door neighbors at the campground came over and introduced themselves.  Great!  We chatted a while.  Later I noticed the neighbors on the other side of me won't make eye contact.  For some reason they don't want to engage.

I had accidentally assumed that the space next to my trailer was mine. I put up my screen tent there.  But it turned out it that space (not marked) was theirs and the manager came to tell me to move my tent.  I did it right away and didn't think anything of it, but I guess the neighbors thought I had encroached on their site on purpose and decided I was a bad person or I might fight them on it.  That's what I imagine anyway.  They seem to engage with other campers.  Maybe they are afraid of the crazy lady next door.   I will never know, when the rain started, they hooked up their camper and pulled out.

During a break in the rain I went and sat with my nice neighbors.  They live in Wausau (which is only about an hour away) and used to camp in my spot every year.  But then they bought the house next-door.  I enjoyed chatting with them and they seemed very open and invited me to "come anytime" and offered one of their kayaks up for me to use!

Ok, here is the part that touches on the news.

My friend, Sara Krouch, lost her husband to COVID complications this week.  Her husband was fun and kind and friend to many. This bright vibrant woman also was (is?) hospitalized with the illness.  This is so sad to see the numbers spike again, and sadder still when our own friends and family become victims.

Be well, stay safe, get vaccinated, and don't do as I do.   I can hear my more cautious friends saying, "Oh, Sue!  Do be more careful!"