As I write this I am sitting in my Weeroll facing the open back doors. I am looking into the woods.  In my big screened window I see the woods has quite the variety of trees, not like the pine forests in Ochlockonee River State Park.  Among the trees within 50 feet of my chair I see:  Tall Long Leaf Pine; Oak, Magnolia, and what I think is a Maple.  The dirt is dark and damp, the lower vegetation is sparse, indicating a population of deer.

The fan is sending a nice steady stream of air on the back of my head and shoulders.  The heat has been high and the humidity thick at times.  I am looking forward to heading north a bit, starting tomorrow.

The evening before I left Ochlockonee State Park I got a knock at my door.  It was my campground neighbor from across the way.  Susan just wanted to let me know she enjoyed meeting me and wanted to keep in touch!  How nice is that!

She shared that her husband was 10 years older than her and that they often talk about what they will do if one of them passes away.  She was encouraged and inspired by meeting me.  I told her that single women over 62 is a huge cohort.  I heard a woman on the radio who converts vans for people saythat 97% of her customers are divorced and widowed women over 62.   Susan and I exchanged info.

I texted Susan when I reached my next location to let her know I arrived safely and what the campground was like.

The drive over to Big Lagoon I tried driving on the Interstate a while, but the higher speed had the van's engine working pretty hard.  It added stress, I kept to the back roads.  And began to wonder how to lighten the load.  I am thinking there are two things that are heavy that I could remove are the inflatable kayak and one of the middle seats in the van.

Big Lagoon is just West of Pensacola.  It is in an area that was struck by Hurricane Sally last year.  I remember hearing about my friend, Camille, having to sop up water as it came in around the doors.

I emailed and called a Camille once I got to Big Lagoon.  We arranged to meet for lunch at Carmen's Cafe in downtown Pensacola one day.

Big Lagoon had not fully recovered from the storm.  Some trails were closed, the beach was closed.  The camping spots and restrooms were top-notch though. And the boat ramp is open.  A lot of birds and rodents are back.  I saw a rat and an armadillo in my camp site. 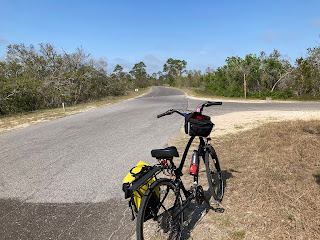 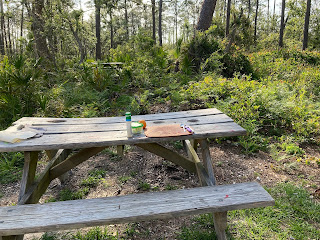 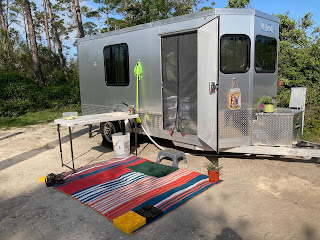 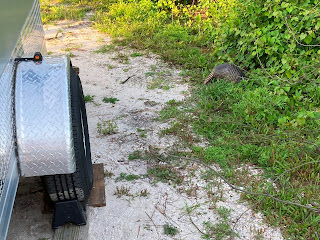 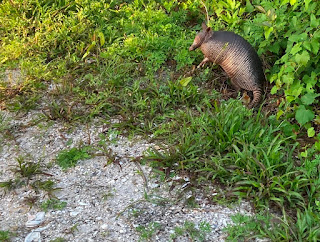 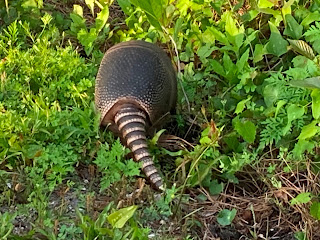 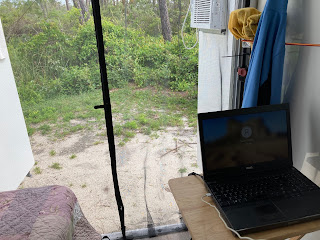 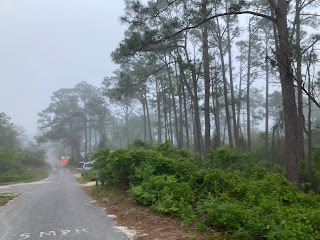 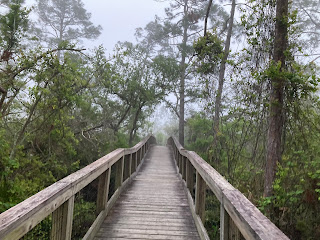 I tried my inflatable paddle board in the big lagoon.  I was afraid of the tidal currents and for good reason.  I took the time to take pictures of the board as I assembled and inflated it because I was beginning to think I had made a pricey mistake by buying it.   I thought if this outing didn't work, I would sell it. 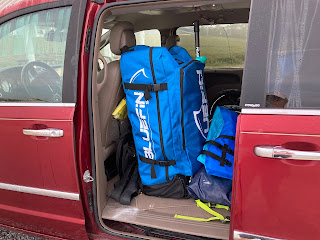 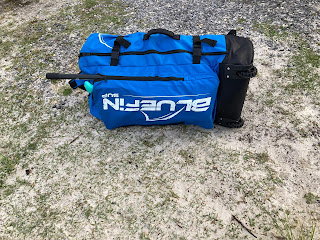 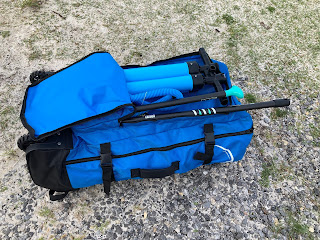 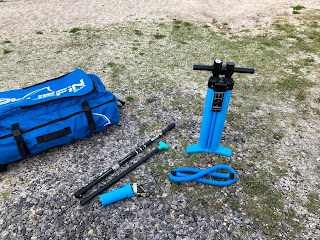 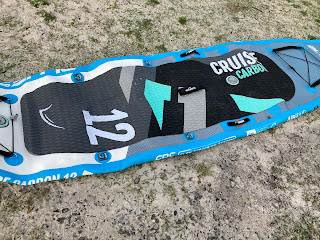 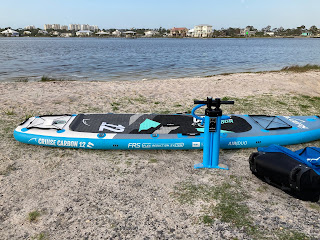 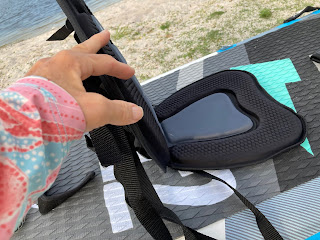 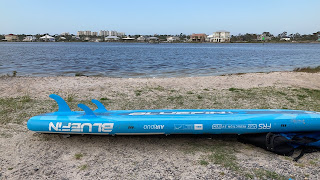 The tide was coming in, so that was good, I thought.  I would work hard against the current and it would take me back in.  There was also a steady wind blowing in from the Gulf.  I paddled hard and made it... maybe 500 feet?  I was trying to keep close to shore but the wind kept pushing me into the vegetation there.  A kayak sits down in the water a bit, this paddle-board sits on top of the water and is easily pushed around by the wind.  I gave up quickly, went back to the landing and sat defeated. 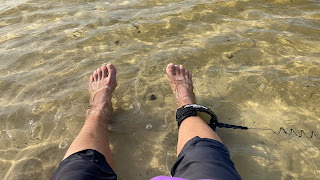 I could admit I made a stupid, expensive mistake (yet again) and move on, or I can keep trying to make this board work for me.  I decided the weight of it in my van was also a weight on my mind.  I can sell it and free myself, or keep towing it around, blowing it up and assembling it, trying again and again.  My neighbor, Mari, told me that when I started biking it wasn't comfortable, but I kept going out (There was an ice cream shop up the road for motivation...).  This is the same, she told me.  You gotta keep trying, you will gain strength and resilience and love it.  Give it time.

About the time I had settled on selling it, wouldn't you know I get a call from Liz Lee.  She and I went out once this winter on a smaller lake and canal when the wind wasn't blowing.  We had a good time.  She urged me to give it time.  Don't get rid of it.  "We will go out more when you get back, I promise," she tells me.

Well I put the pictures up and tried to sell it while I was in Pensacola, it didn't sell.  So I still have it and now I am thinking, smaller lakes without wind...

I had a wonderful time the day I met Camille in Pensacola.  I thought parking would be at a premium downtown so I parked a few blocks away and rode my trike.  I was able to explore before and after we met.

There were whole clusters of new or refurbished homes that were deep and narrow with big front porches and small front yards (designed to improve a sense of community).  Camille told me that Pensacola has a philanthropist that provides grants for city improvement projects.  He has traveled the country living in places and helping to revitalize them.

I thought of a few questions after we departed.  I also through I should have had the waitress take a picture of us together!!!  Dang.  I took a picture of the place we ate from across the street.  It was wonderful seeing her.  George and I stayed with her in her condo a couple nights on our trike trip from Illinois in 2014. 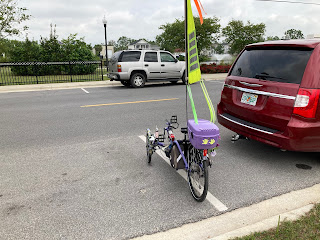 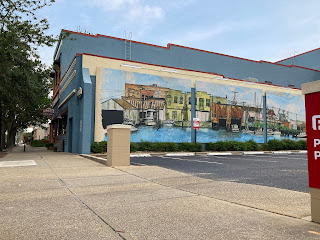 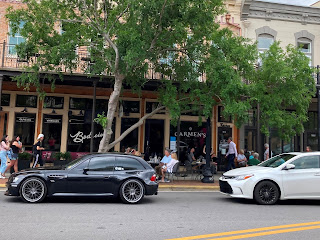 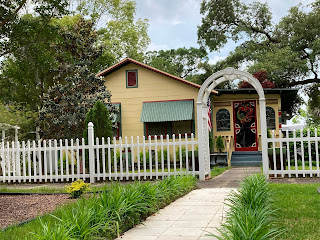 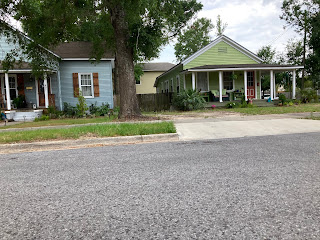 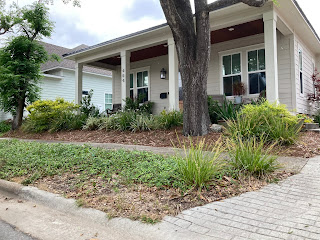 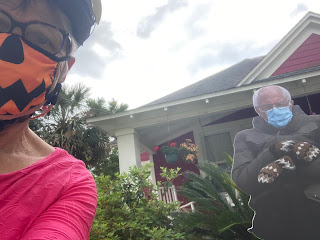 I stopped at the library and donated Alzheimer's Trippin' with George and thought I should have given copies to Camille for her church!  She said her church is mostly old folks and they might have found the reads helpful.  They probably have a church library.

I got my trike back in the van just as it the first sprinkles hit of a heavy rain.  I drove to Perdido Beach which Camille recommended. 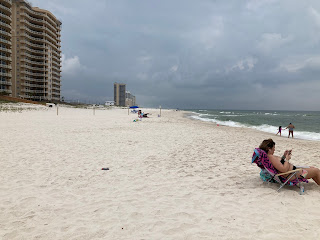 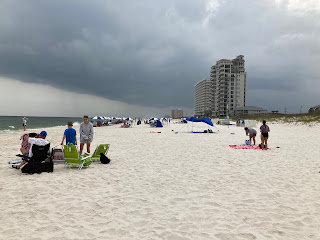 Well that is enough for now, I gotta go for a walk and explore Fontainebleau.