For those of you who have hooked up trailers to pull, you know that there are two satisfying sounds.

The first is when the cup receiver on the trailer slides down onto the ball of the hitch on your towing vehicle.  At first it was a scary sound for me, but after a few times the sound was cause for a mini-celebration, a pat on the back.

The second sound is when one pushes the latch into place.  There is a latch that slides under the ball to prevent the trailer cup from bouncing off the ball.  Sometimes I have gotten the first sound (the receiver engaged with the ball) but I couldn't get the latch to move into place.

That has required me to wind the trailer back up off the ball in order to free the latch and try again.

I am telling you all this technical stuff because this morning I thought I heard both good sounds.  I thought I saw that the ball and receiver were engaged.  I guess I was relying a bit more on the sounds because it was still dark out at 6:30 this morning when I was hitching up Lilac to my van.

I woke up at 2:30 and couldn't get back to sleep.  I was excited to be going on a trip again.  This time I was planning on meeting up with some fellow trike riders to ride Sanibel Island in Southern Florida and then the Everglades for a moonlight ride on Halloween.

I think I was also a bit nervous.  Because folks have been asking me how my summer went in the Weeroll and I had nothing bad to say.  It  was a wonderful time, I did over 6,000 miles and didn't have any problems.  I keep telling them how wonderful it was and then I say, "knock on wood."  Not that I am superstitious...

I know that no problems isn't how things will continue.  Life usually has a few lessons and bumps along the way.

After trying to fall back to sleep, I gave up at 4:00, made coffee and started packing up the trailer.

It was still dark out when I pulled away from home and headed out of town.  I was at the last light in town, waiting for the green and thinking about something.  When the arrow light had the cars next to me moving out so I moved out, only to realize the light was red.  I stepped on the brake and "BAM"!

I thought maybe someone ran into the trailer, but there was no one close enough.  Then I thought that maybe the electronic brakes needed adjusting.

For those of you who don't haul a trailer, there is a set of  brakes on the trailer that are wired to the brake in my van.  When I step on the brakes both the car brake and the van brake engage.  I have some controls inside the van so I can adjust how vigorous the trailer brakes are.

When the light turned green I went on, listening.  The next time I had to stop at a light, again the BAM!

I made it all the way to Townsen Park, which is about 16 miles by bike.  I had stopped at Townsen because  I planned to get rid of my kitchen scraps by feeding them to the goats near there and get a little walk in before I spent hours in the van.

When I pulled into Townsen the trailer made the noise again. 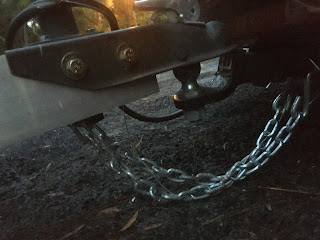 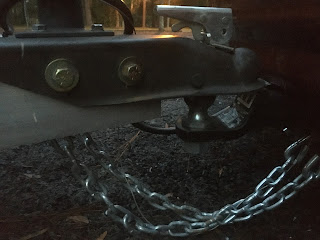 I have a nice little dent in my bumper now.

It took me a moment to figure out how to fix this.  Then I wound down the post to lift the trailer receiver off the van.  I could inch forward the van to get the ball back under the receiver.   I wound down and lowered the receiver onto the ball.

Then the lever (latch) wouldn't latch!   The cure for this I had already discovered.  I wound the pole back down to lift the receiver off the ball and release the lever which was stuck up on top of the ball.  The next time when I lowered the receiver it fell into place and latched like it should. 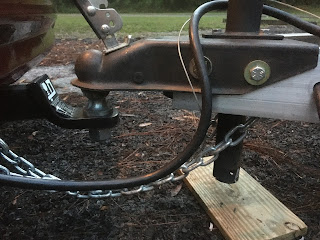 Which reminds me, I told Debra the pole is getting rusty.  She said it is aluminum, it shouldn't rust!  I don't know, but mine is rusting.  She said to make a list for the Weeroll factory and take the trailer back to the factory to get stuff fixed before the one-year warranty expires.

As I started walking toward the goats I could feel the crack in the sole of my sandals.  It is almost all the way across the ball of one foot and almost through all the layers.  I had ordered a new pair.  I got the new pair, but for some reason I didn't pack the new pair.  Sometimes my thinking is off... 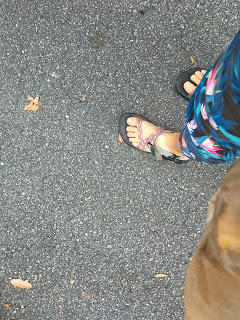 I hope my sandals make it through the week until I return home! 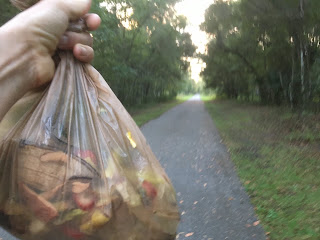 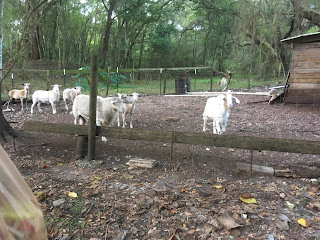 The goats were glad to have treats.

Speaking of "what was I thinking?" moments.

While packing my trailer with stuff from my fridge I was shocked.  I found a piece of pizza I had put in the fridge and forgotten about.  I NEVER forget about pizza!  That is a sure sign I am either under stress or I am losing brain.

COVID and its social and economic impacts;

A country that seems divided.

We have numerous countries and hackers and spammers interfering in our elections by spreading false news, luring people onto false voter registration sites, and messing with our electronic voting systems.

The unprecedented things that our current President says and does makes many of us nervous. (Like he tweets a several hundred times a day, runs up a seven trillion dollar deficit, threatens to not leave the Whitehouse if he loses the election, and he seems to not condemn the actions of some folks that tried to kidnap the Governor of Michigan).  Everyday he tries to shock us some more.  He is a showman and a salesman and he is quite successful at that.

The Senate just confirmed Amy Barrett to the Supreme Court while over 60 million people have cast early ballots and the election is less than nine days away.  Folks are predicting the Supreme court will vote away our health insurance shortly after the election.

California, Oregon, and Washington and now Colorado are still burning with lots of fires.

Louisiana is about to get hit with a hurricane for the third time this season.

What am I leaving out?

Which reminds me a friend asked me what are the early signs of dementia.  WOW, there are so many signs but someone could have one and not others.

You might notice a personality change.  This could be that the person loses interest in something they used to have a great interest in, or it could be a nice person turs mean or a trusting person becomes suspicious.

Becoming quieter or talking a lot more.  George started to stutter as his brain tried different neural pathways to find the rest of the word, (the old pathway had died/disappeared).

George started to sway on his feet, he began to stumble.

Here is a list of 10 signs the Alzheimer's Association has listed.

The good news is I fixed my hitch and didn't have any more problems on my trip to Perriwinkle Campground on Sanibel Island near Fort Myers, FL.

I got a text today from Jeanne Clayton who I met via Facebook and biked with her in Southern Illinois on the Tunnel Hill Trail.  I had presented her with The Journey Continues: Alzheimer's Trippin' with George.

Here is what she said:

"Just wanted to let you know that I fisnished [The Journey Continues] Alzheimer's Trippin' with George this morning.  I started it yesterday morning.  I laughed and cried throughout.  What an awesome book..." 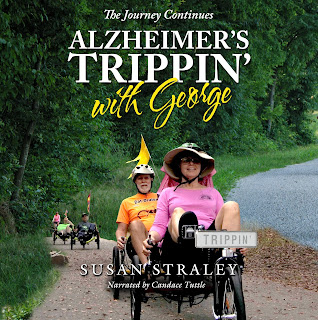 The campground is pretty cool.  Just behind my site there is a pond with a wide variety of ducks.  There are cages with many kinds of birds and a cage of Lemur monkeys and Squirrel monkeys. 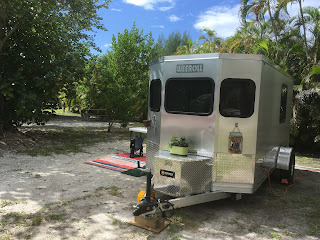 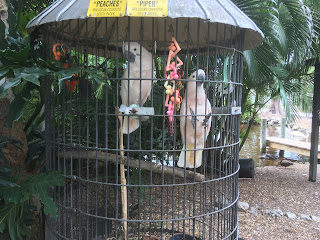 It is less than a mile to a big long beach for walking, wading, swimming, and just experiencing. 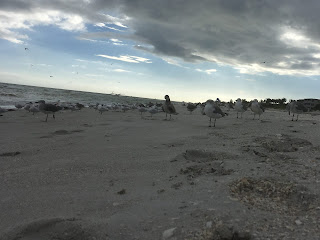 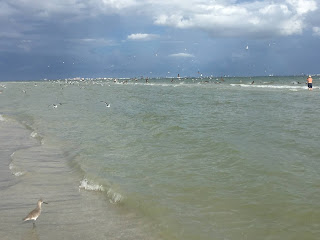 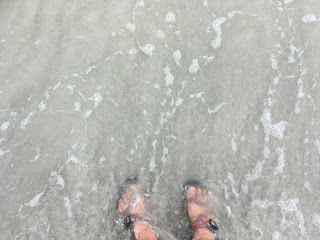 Shortly after I arrived a couple pulled up to ask about the Weeroll.  It turned out they are from Wisconsin and are full-time RV'rs.  They own a peice of land in an RV park in Florida and then travel in the summer.  They don't even own a storage area.

They bike, and said they might come to the Everglades and join us for our full-moon ride on the Shark Valley trail on Halloween.

I am still wondering if that full-time is for me.  I certainly love my house but feel so much more like my life "fits" me in my little Weeroll.

I looked on line at stories of tiny-houses.  What I have heard is that they are not allowed (nor is a parked RV) on land in Citrus County, FL.   Where are they allowed?  Do I want to move away from the Withlacoochee and my Withlacoochee family?  I don't think so, but this COVID has changed things so much!  There is more research and thinking to be done.  No hurry... except I am not getting younger.

The trikers I met up with are old like me.  So it isn't late nights of partying.  At least not this crowd.  We will be up early tomorrow though.  Will from Polk City is leading a few trikers on a tour of Sanibel starting at 8:30.