All By Myself - Widows Way

When I left you last I was heading to Cedar Falls and I wasn't quite sure any of the folks I know there would be available.

It turned out, none of them were.  They were all traveling themselves.

I reached out on the Facebook tricycle and recumbent groups to let them know I would be riding the trails and would love a guide or some company.

I got a couple of responses, but the riders weren't available to meet or ride.

I was apprehensive.  Being on my own is not something I have done a lot of this trip.  There is usually someone I am scheduled to meet-up with after one or two days by myself.  I had scheduled three nights in Cedar Falls.

I had a camping spot in the George Wyth State Park.  It has occurred to me that I could probably travel the country visiting all the campgrounds and museums with "George" in the name.

On the route there was a police road-block.  So I followed the cars in front of me.  They went down a very dusty gravel road that was parallel to the closed highway. 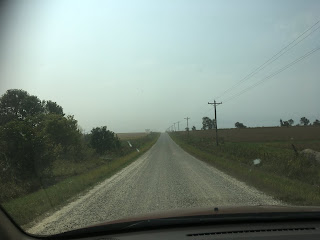 I had packed my lunch.  I followed signs to a park.  It turned out to be a campground with electric.  I pulled out my phone and used google maps to search for campsites and campgrounds to see if it would show up.  It didn't.

I called Cindy.  She had once told me about an app she uses to find City and County parks that allow camping.  She said it was called Allstays.  I put it on my phone (about $10).  Now I will be able to find places like this. 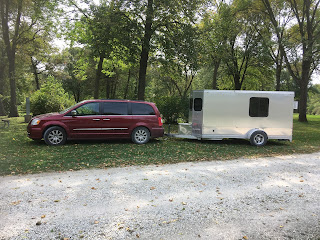 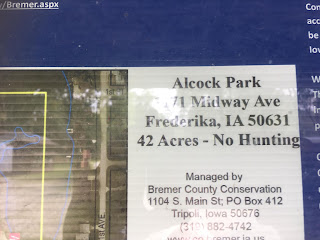 When I got to George Wyth State Park and set up, I found the inside the camper was covered in a fine layer of dust from that gravel road.  Especially where the wall meets the floor.  I guess I need to do some caulking or filling with some putty stuff that will flex but seal. 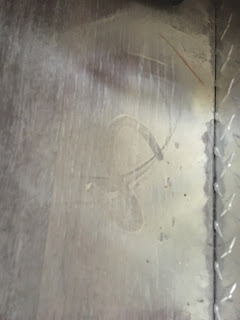 I was pleased with my site.  I had a view of the river through the trees, I was not far from the water supply and the dump.  But far enough I couldn't smell it.  And I had electric and access to the Cedar Falls Trail network right in the park outside the camping area. 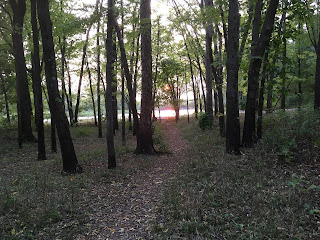 That evening the sun was setting as a bright orange ball.  I tried to capture it on my cell phone, but had no luck.  Ok, I told myself, quit trying to capture it, just enjoy it. 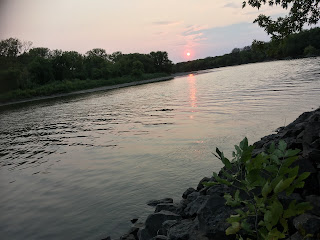 The next day I rode my trike on the trail to Gilbertsonville.  The trail markers were pretty clear, I didn't have that many trail crossings.  It was a good ride.

There was a kiosk talking about the diversity of Cedar Falls area.  One also talked about the changes and conflict that occurred during the 40's.  They called in the National Guard.  Gee, sounds like these days, a change is happening... people are demanding change. 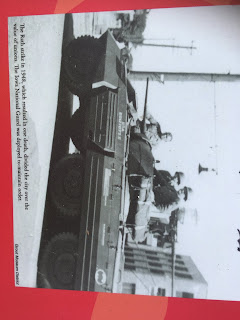 When I got to Gilbersonville there was a sign that said the depot was open during the day and the bathrooms were available to use.  Yay!  I tried all the doors.  Locked Locked Locked.  Arg! 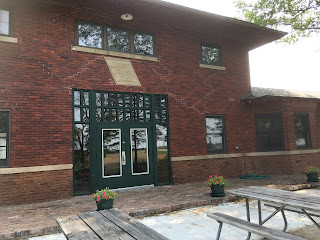 I rode around the town looking for a park or a portapotty.  I stopped to tour a lovely veterans memorial.  There were two retired gentlemen doing some cleaning and painting. 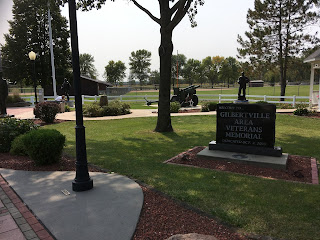 I first did some yoga and Qigong by the river, then I rode into downtown Cedar Falls for lunch.

I was excited to see a Maid Rite shop.  I remember them from my childhood and had not seen one in years. 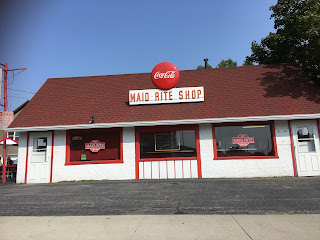 But I went on to see what else was downtown.  I ended up at Tata Yaya.  What a weird name.  But they had crepes.  Oh my it was so good!  And as I sat there alone, I realized I was ok with being alone.  The lunch place was totally my decision, the route is my decision, every stop and turn-around is my decision.  This is ok.  I am ok... on my own. 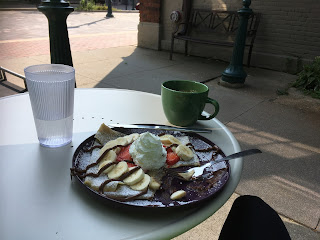 Then the frustration in my riding began.  There are lots of trails in Cedar Falls.  That is a GOOD thing, right?  Yes it is, but if you are from out of town visiting, it is impossible to keep on the right route to get you where you want to go.  Even my gps wouldn't help me.  It took me on streets when there was a trail just over there.  I wanted to do the Cedar Prairie Trail that would take me on a loop.  But every few minutes I had to stop and re-consult the map because there was yet another trail intersection, or end of trail.

I was tired and frustrated by the time I got to this adult fitness thing.  I wanted to do it, but I just didn't have the energy or spirit.  That is not normal. 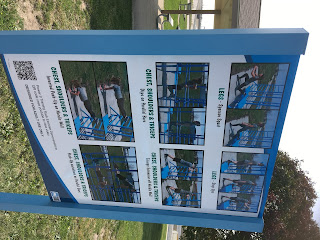 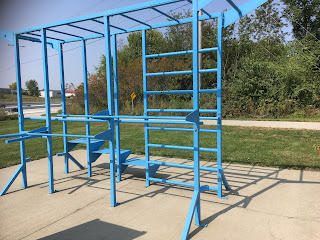 A two or three hour ride was now approaching five hours and I hit a road block.  Sigh.  Yep, it would have been nice to have a local cycling guide with me. 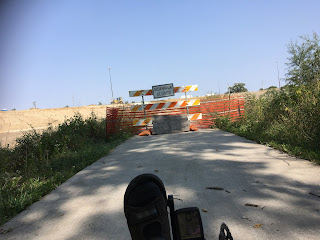 There were some fun things to see as I wound my way through neighborhoods of small little cracker-box houses trying to find the trail again. 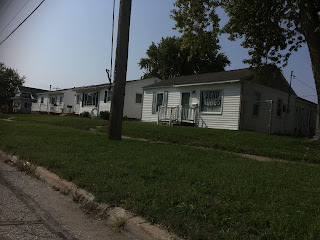 I had contacted my friend Kay that lives in Iowa a while back to arrange a meeting.  I had failed to follow up with her and now it looked like I might not get to meet up with her after all.  But then she called and said she re-arranged her schedule!  It was amazing how that lifted my mood.  I was so happy!

Being on my own is ok, but I really like to have a meeting to look forward to.  It makes all the difference.  Especially when it is a special friend that I share history with like Kay.

Kay lives in Grinnell, IA, which is a small college town East of Des Moines.  I could swing out that direction before heading East toward my next campground near Peoria, IL.

Kay met me at a park and we went for a leisurely bike ride through town.  Grinnell was one of the towns hit by the Derecho wind storm.  There were lots of tops of trees that had been blown off, whole trees toppled.  Most of the mess has been cleaned up.  She took me by some damaged houses and told me she didn't have power for 10 days after the storm.  The whole town was buzzing with chain saws and back up beeps for weeks after the storm.

She took me by the college where there is a new building that encloses part of an older building in glass.  It was neat to see. 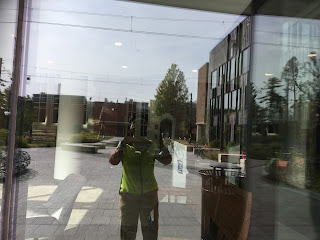 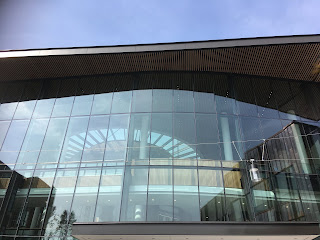 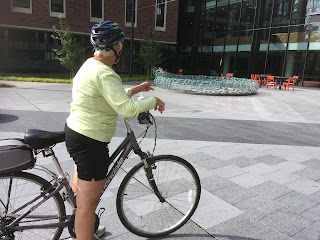 Kay ordered us sandwiches and had her husband Jim deliver them to the park for us.  Thank you Kay and Jim for the wonderful visit!  I was so happy to connect again! 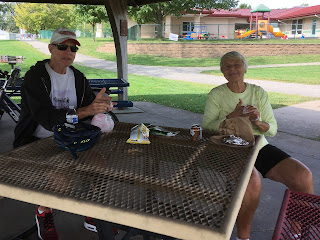 I was impressed by Kay's fun laces. 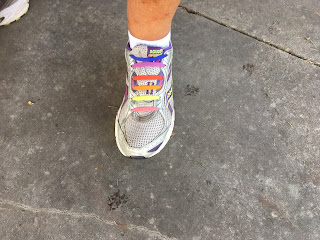 Jim took our picture before we said goodbye. 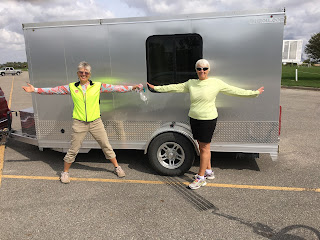 I learned that I have sold my first book in Australia!  Woohoo! 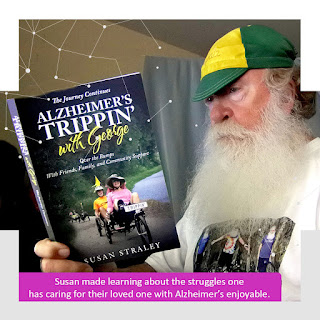 I am taking a free class on how to write a better blurb by Bryan Cohen.  I have like a million impressions on Amazon, but only a few clicks.  I think my book cover might need redesigning to better match the genre. 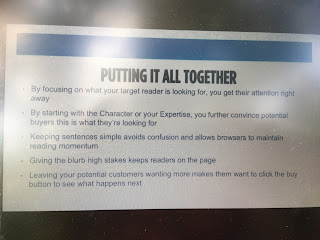 I polled the folks on my Susan Straley Writes Facebook Group and they said the books fit in (mostly) the A and B of following Genres.

A. travel biographies and memoirs
B. Women's Memoir
C. Adventure Travel
D. Senior Travel
E. Travel Humor
F. Other (Please specify)
So I need to re-write by blurb and re-design the book cover to be more like the blurbs and book covers in the Travel memoirs and Women's Memoirs.
What is your vote?  If you read my books, what category/genre do you think they best fit? 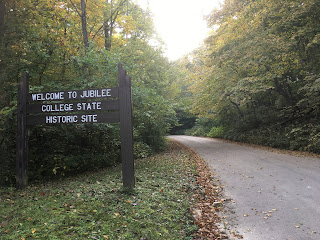 I didn't arrive at Jubilee College State Park near Peoria, IL until after 5 p.m.  I am not meeting up with anyone here.  But I do have a childhood friend that lives a half hour away.  Maybe I will give her a call tomorrow.
- September 25, 2020