It is a cool grey Monday - 8/3/2020
I am loving it! I am feeling free and healthy and satisfied in spite of some disappointments. 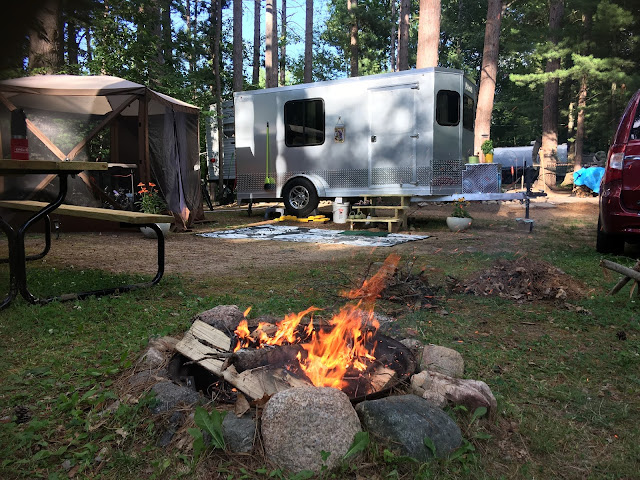 This is a picture of the one fire I built this whole trip.  I sat and watched it for 10 minutes.  Then it was done, I was done.  All done.
There is a hole in the dirt outside the screen-tent where I have my portable sink. 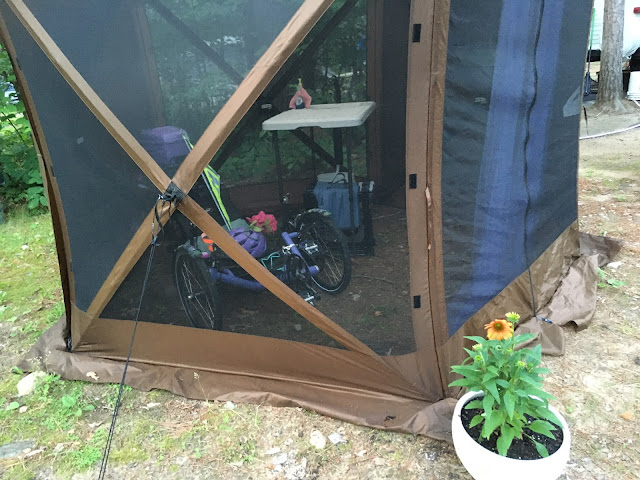 The hole is nicely round.
One afternoon I was washing dishes.  There inside the entrance to the hole was a cute grey mouse.  I smiled inwardly, "I now have a low-maintenance pet!"  I tried to move closer without scaring it away.  I took a picture through the screen with my phone.  It didn't turn out real clear.  I was excited to share with you the discovery of my little companion. 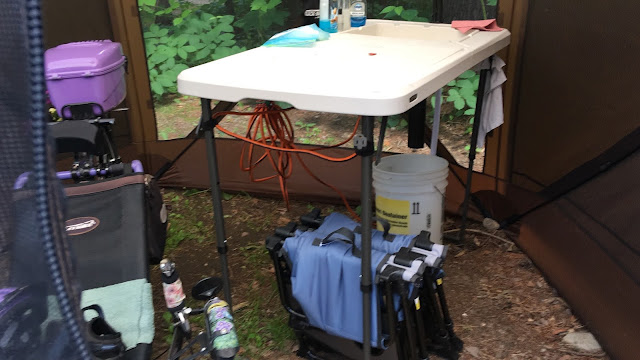 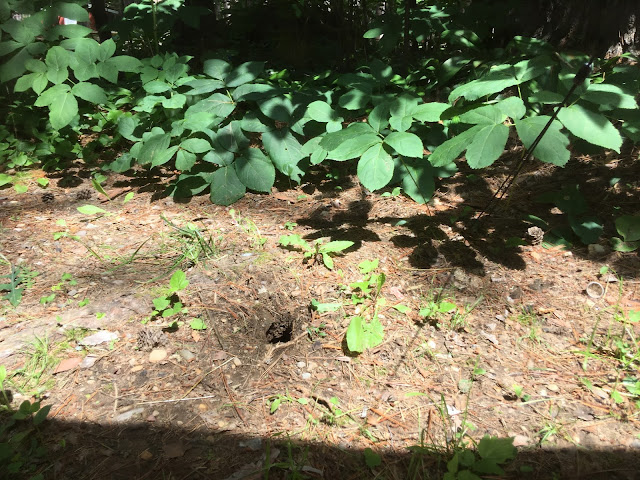 There was a bit of celery that had fallen to the ground, and a corn chip.  I walked around the screen-tent to get a better picture, but the little grey guy was gone. I set the treats outside the hole.
Today I saw him again just inside his hole looking at me.  "Want some more?" I asked.  I walked out of the screen-tent and approached the hole slowly.  The creature didn't retreat!  Something seemed odd.  Why wasn't it moving?  Don't mice wiggle their noses?
I leaned in and then it dawned on me.  It wasn't a cute fuzzy grey mouse!  It was a lumpy old grey toad! 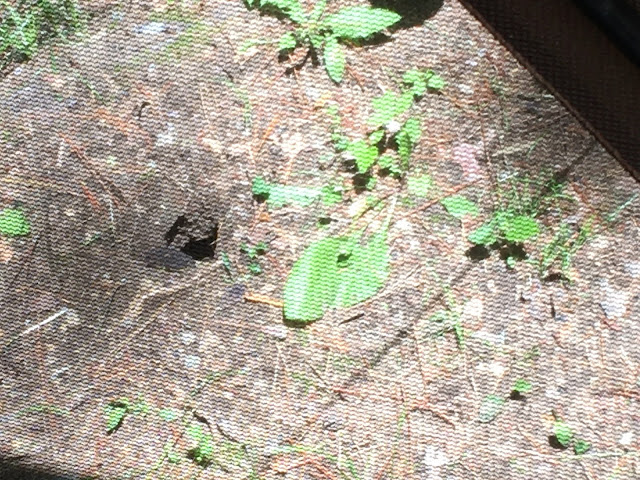 Just like me to get excited about something that isn't really what I think it is.

As I told you I took an on-line Amazon Advertising Class for authors.  I put up a few ads according to the directions we were given.  At first not much happened.  Just $0 to $50 in sales or so.  Then one day I pulled up the report and I had $355 in sales in one day!
Of course I was thrilled.  People were finding my books!  Maybe they would get some inspiration and help for their own journey.   I had to share the news. I went up on Facebook and shared it with my classmates.  Then I went on Susan Straley Writes which is the Facebook page where I get to talk to readers about my writing and advertising and get their feedback.   The congratulations and adulation were immediate!  I was feeling super blessed.
Then I went back to my Amazon Ad report and started to investigate.  What did I do right to make all those sales for Alzheimer's Trippin' with George? 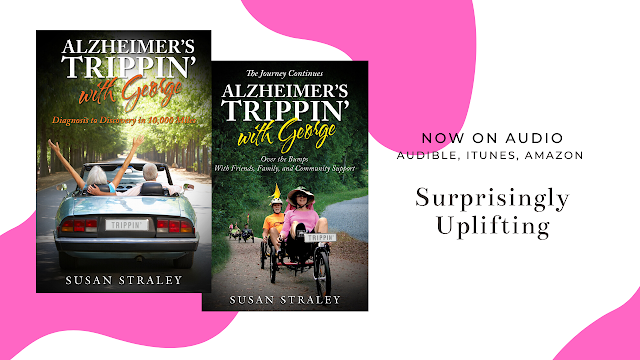 I wanted to repeat it with the second book in the Trippin' series, The Journey Continues.
I found the ad.
Ummm... something isn't right.  Only one click on the ad and $274 in sales?  Amazon's computer made a boo boo!  Oh no!  Sigh.  All the celebration and what I ended up with is a grey lumpy toad. 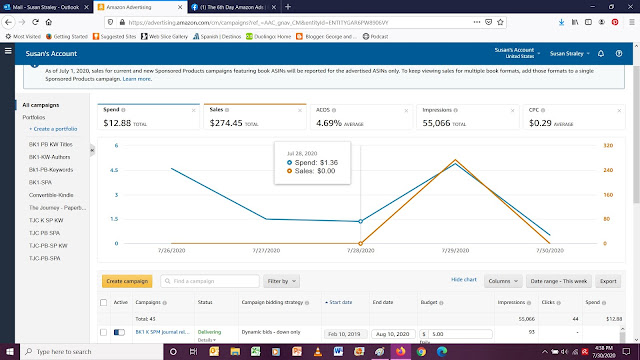 I am so glad to be here.  I was sitting on my sister's deck with her watching the river flow by and bees buzz around her flower gardens.  I said, "I like my schedule.  I get up and do something active like walk, ride, yoga, kayak, or Qi Gong.  Then I go keep up camp.  It is amazing how much time it takes to do camping stuff.  It takes longer to cook, to clean.  The dirt is spread out in my house, but in a tiny 72 foot camper it is right there.  I have to sweep up the floor a couple times a day, more often if it is wet out." 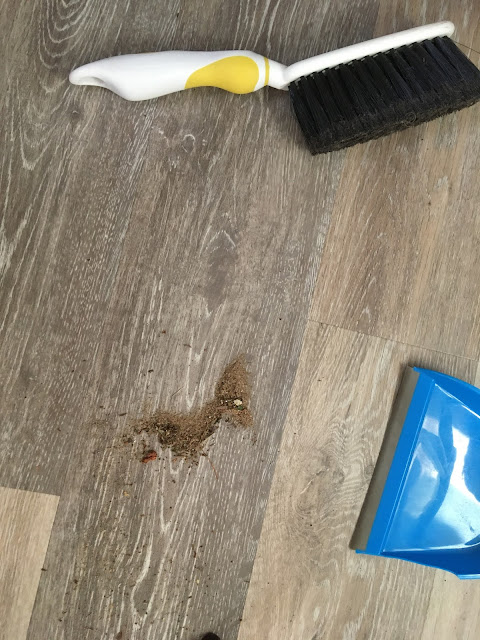 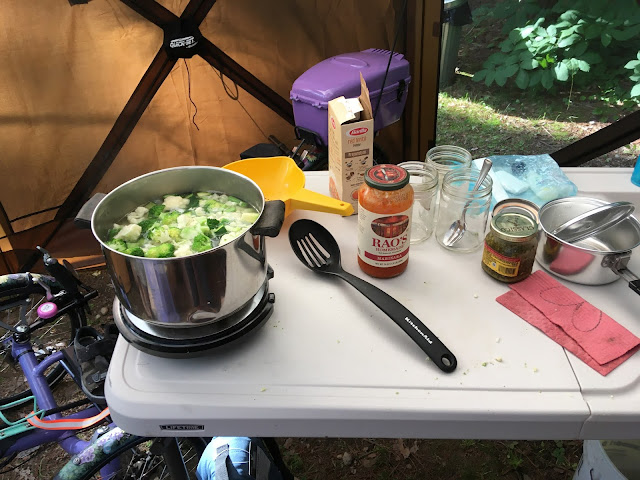 My sister shuddered and said how she loves the idea of life being taken up with the daily tasks of survival.  It makes life so simple.
I agree.  It is what I love about bike touring.  You have less stuff to care for, but all your time is taken up getting from point A to point B and then finding food, water, shelter, and planning your next day.  That's it.
No time to fret over the headlines.  Though I still am managing a bit of fret... I will get to that in a bit.
First, lets talk about what fun things are happening.
We went to Moon Lake again for another session of Ai Gong (Qi Gong in the water).  It was cold again so I stayed on land and did it slow-mo. 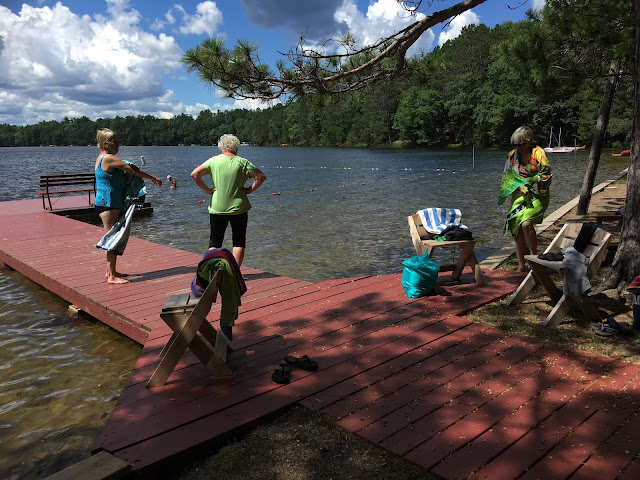 Mary and I walked on the Bear Skin trail that was flooded in places from all the rain. 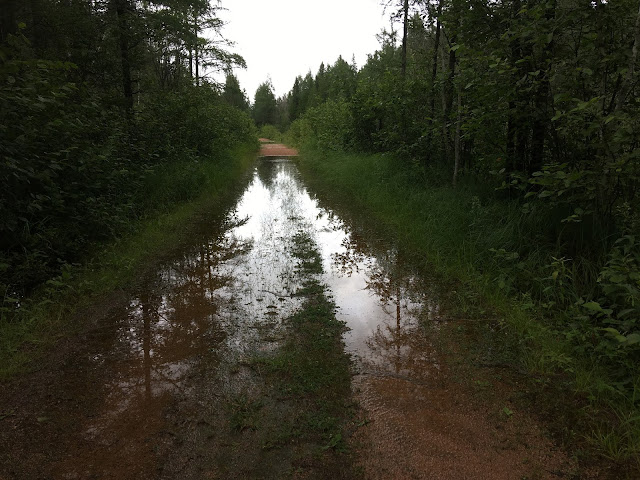 We returned a couple days later to bike it in the afternoon with some new friends we met through Yoga. 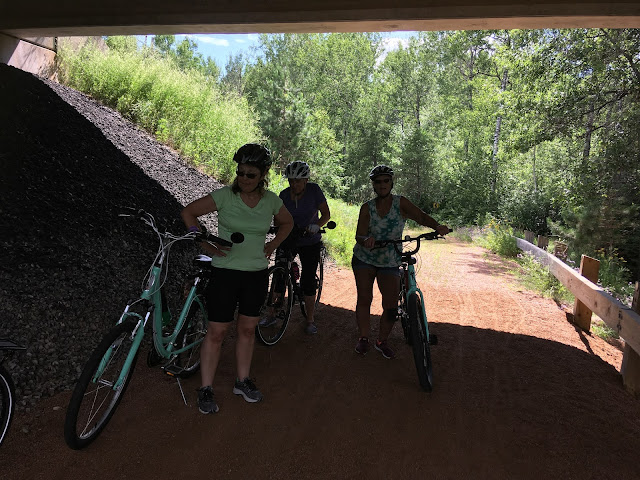 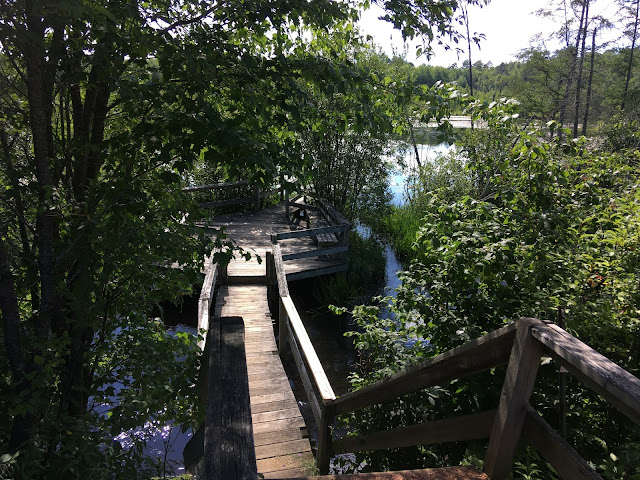 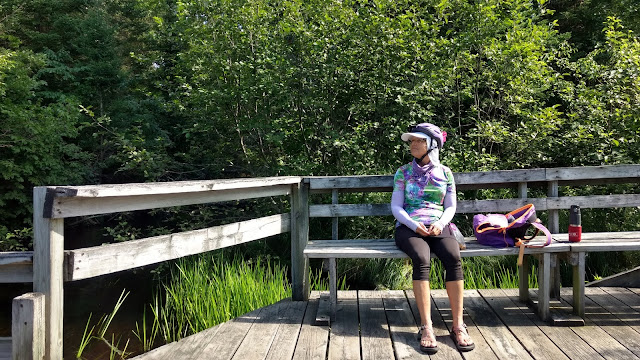 There are a lot of memories on this trail.  George and I would ride it almost every year with our Wisconsin biking buddies.  So many laughs and ice cream stops.
One afternoon we biked with about 10 others on Two Sisters Lake.  I chatted with a woman who summers in Minoqua and rides 30 miles at a pop.  When I packed up I forgot to grab a calling card and give it to her so we could ride a day together. 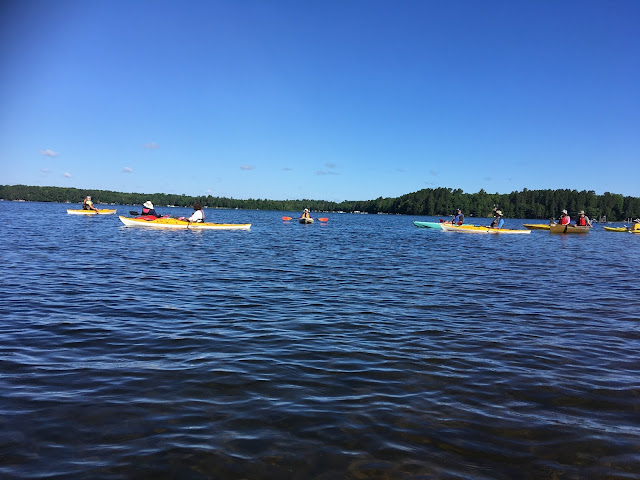 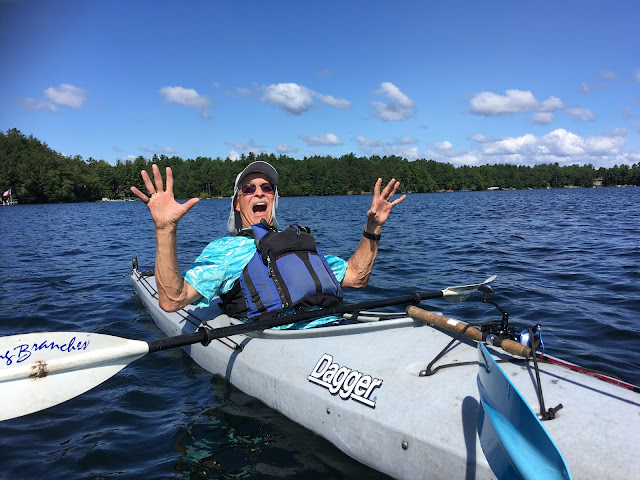 Though I may spend a day completely alone, amazingly I am not feeling lonely.  My days have their rhythm and I often either have an activity or a happy hour with my sister.  On the weekends the seasonal campers are here, and though I keep my distance from them, I will pull a chair outside their circle and chat over happy hour sometimes.
My friends Sandy and John in the Waukesha, Wisconsin area have a camper and they are coming up for a few days!
Mary has some kayaks they can borrow so we can go kayaking one day.  I sent them to West Bay Campground which is only two miles away.  Sandy and John are being very careful about COVID and I didn't think they would feel comfortable checking in here.  (I will share more on that in a bit, and for those who are burned out on COVID stuff, you can skip that part.)  West Bay has a nice little sandy beach area so it will be a good place to hang out if it gets hot.
I woke this morning to 44 degrees.  It isn't hot now!  I am glad that I packed my down comforter.  It is folded in half on my little cot.  I was comfy warm last night.  I woke up smiling with the sun this morning.  I stopped spending the time making my cot into a couch and instead I keep it a bed.  No one enters my little space anyway.

Ok, so here comes the COVID stuff. So you can skip it if you don't want to hear anymore about it.
It was just a matter of time before COVID19 would come within biting distance of my circle.  Still, no one I know personally is currently infected.
I got a kick out of the grocery clerk's mask.  The Rhinelander Hodag is... well I can't explain it. 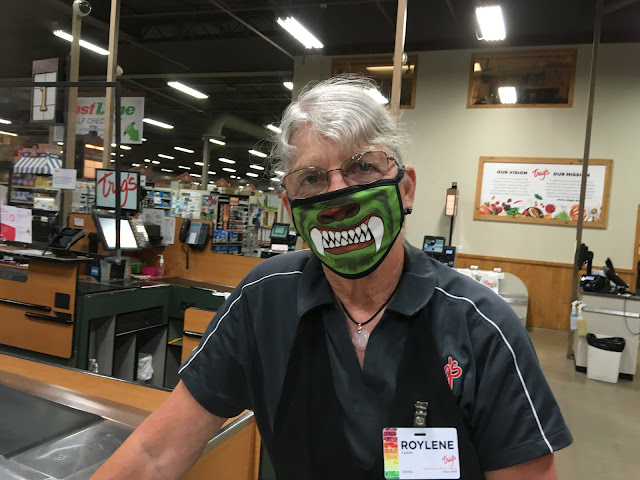 I have one friend I have not seen in several years that got COVID in March and is still struggling to overcome the harm it has done to her body.  She said she caught it waiting in an emergency room for 36 hours.
This campground has had two cases.  And the hostess/bartender should have let us know about the first case.  She should have started wearing a mask because she was in contact with the guy that got it.  She probably hasn't even got tested.  She resents COVID so much because she is running small businesses and the shut-down and slowed traffic has hurt the businesses.  Her response has been, like many, to pretend it doesn't exist.
The night before I arrived, the tavern here at Lake George Campsite was full of people partying.  I remember when I checked in I had to enter the tavern and though I wore a mask, I felt vulnerable.  The hostess was the only other person in the building, but she didn't wear a mask and she told me she was up until three with the party goers.
I arrived on Monday.  Tuesday one of those party goers was diagnosed or came down with symptoms... I don't know which.  I have been here longer than 14 days, so I got lucky and didn't soak in enough germs that time.
The bartender has attended potlucks with the seasonal campers, in close proximity.  She has continued to bar tend.  Each night a horse-drawn carriage full of drinkers arrives at the tavern.  It is one of their last stops on their loop of bar-hops around the lake.  They sit in the carriage (and probably in the bars) shoulder to shoulder without a care about the pandemic. 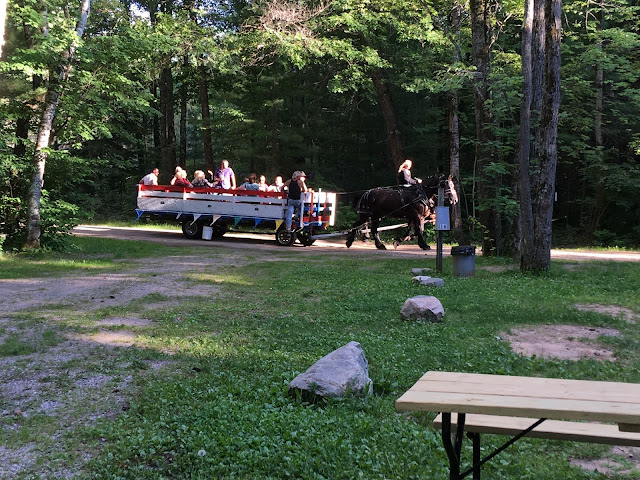 Last week the Governor of Wisconsin mandated masks in places where people can not physically distance from each other.  Immediately there was push-back by the "me and my rights" groups.   This is not new.  The same thing happened during the 1918 pandemic.
This morning on my walk I saw signs on the tavern.
"Masks NOT required here."
One from the State that says masks are required in places where people gather and another from the County Sheriff saying he and his deputies will NOT be enforcing the order because it is "unconstitutional" and besides, they can't ask why you aren't wearing one because that interferes with disability rights.
So here we go.  Some of us trying to slow the passing on of the virus and some of us ignoring that there is a pandemic going on.  As George would say, "It is what it is."
The second case in the campground was one of the seasonal campers.  He has had two strokes and was feeling down the first weekend I was here.  I went to a gathering after their meal and kept my distance.
I hear he was at that outside gathering and that I met him.  He finally got tested the Thursday after the weekend.  By the time I found out, 10 or 11 days had passed.  The health care contract tracers did not call the campground or notify us campers.  I was told they only go back two days from the time you are tested.  So since he didn't get tested until Thursday he was never here and contageous.   It all makes zero sense.
With the delay of notification, I only had to be super careful with my sister and brother-in-law another three or four days and then I was done with the isolation period.
Lisa, my campground neighbor, is going to be watching her grand-kids for the next couple weeks so she decided to not return to camp for a few weeks and avoid the risks here.
I am glad I figured out how to not use the facilities here, and I never have to enter that Tavern again.
All the seasonal campers here go home during the week and return on the weekends.  It is nice and quiet during the week and a bit noisier on Friday and Saturday evenings.  People gather around their fires, my Weeroll fills with smoke, and the hum of many conversations continues until about 11:30 at night.
High Chipmunk
Today I saw a chipmunk that was being still with its nose in the moss.  (I got close and a good look, so it definitely was a fuzzy brown ground squirrel or chipmunk.)  I got close and tossed a chunk of apple I was eating its way.  The chipmunk raised its head as if interested, but then the nose went to moss and its eye-lids got heavy.
I was thinking the poor thing was poisoned until I noticed a plump mushroom popping out of the ground nearby with little teeth marks and chunks removed.
Ohhhh.  It's a hallucinating or drugged haze it is living in.
Hours later I checked on him and he was able to dash off a few feet before he put his nose back to the ground.  The chunk of apple was gone.
- August 03, 2020

Locked Out or Unhinged? 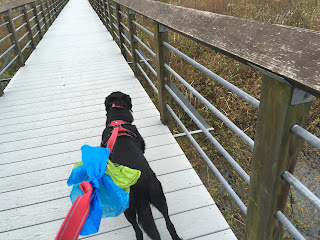