I hope your are doing well with your new routines.


This morning the birds were singing.  It was a lovely 52 degrees when I stepped out for my walk, my face-mask tucked into my pants pocket, my binoculars tucked under my arm.

The trail that runs past our neighborhood is a state park and therefore is closed.  I have read it is scheduled to re-open on May 15th.  Breaking the rules, I walked down the trail because I had seen a nest of large white fluffy birds there the other day and I wanted to get a closer look with the binoculars.

I was alone on the trail and as I approached the lakes that boarder both sides of the trail in this area I was awed once more by the beauty.  A light swirling mist was rising up from the waters.

I suddenly missed George deeply.  I talked to him and told him so.  I also told him I was often glad he was gone.  At the same time I was appreciating the beauty I began to cry.  I told George I know how much he would also enjoy this walk and this scene.  He would also be excited to go get a closer look at the birds.

I told him I missed sharing these moments with him.  I missed holding his hand and having him rub my back.   It was a lovely moment, really.  Missing him and imagining that his spirit still accompanied me on this outing.

I arrived at the place where I could observe the nest in a small cypress tree in the shallow waters.  The white birds have necks that move like Anhingas and when I got home I looked up Anhinga chicks and really think that is what they are.  I didn't see the parent today.

As I stepped away from viewing the chicks something large and silent swooped over the trail and landed on a branch over the pond on the opposite side of the trail.  I think it had found its sleeping perch for the day.  Its lids were heavy and it didn't move much.  I think it was a barred owl.

As I headed back home I saw a small possum next to the trail.  It's back legs sometimes giving out.  It must be sick that it didn't notice me as I walked by.  I took several pictures, none of them turned out.  I didn't want to crouch down or get closer,  I thought he might have rabies or distemper and I wanted to be able to move quickly if he started coming toward me. 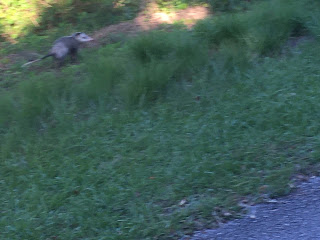 Staying Positive During a Pandemic


It is Tuesday, April 28, 2020.  It took a while for me to figure out it was Tuesday since our days now don't have the normal structure that used to define our weeks.

If you spend much time looking at the news you will get frustrated, full of worry, and well just feel like crap!  So don't do it.   That's my advice, for what it is worth.

I suggest you step away and step out into nature.  And if you can't do that reach out to someone who is also isolated.

It also helps me to put these days in a historical context. 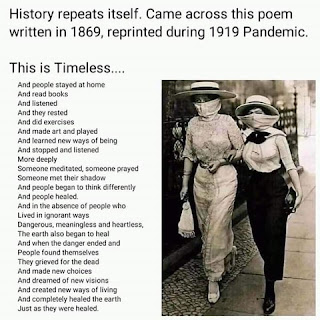 I don't know who to attribute this poem to but it is beautiful.  If you can't read it, I am re-writing it below.

This is Timeless...
And people stayed at home
And read books
And listened
And they rested
And did exercises
And made art and played
And learned new ways of being
And stopped and listened
More deeply
Someone meditated, someone prayed
Someone met their shadow
And people began to think differently
And people healed
And in the absence of people who
Lived in ignorant ways
Dangerous, meaningless and heartless,
The earth also began to heal
And when the danger ended and
People found themselves
They grieved for the dead
And made new choices
And dreamed of new visions
And created new ways of living
And completely healed the earth
Just as they were healed


The person that sent this to me also sent the information that pandemics come about every 100 years.

The changes are just part of the ebb and the flow of life.

There was a time (and it may come to that yet) when wearing a face-mask was mandatory or go to jail.  I wear it when people are around, but when exercising I need to breath in fresh air and release the bad air.  So I try to keep away from people so I can breath freely when exercising.

If you are still having a hard time with all the changes in your life, read this article from the Atlantic.

I called the campground in Wisconsin where I have reserved a seasonal site for the year.  The manager understandably is frustrated with the situation.  Wisconsin will be allowing campgrounds to open on May 15th, but the community areas such as the showers and the bar and grill must remain off limits.

She said she received my deposit but has not taken it to the bank yet because she is one of the vulnerable and isn't venturing out to the bank.

So now it is in MY hands.  Do I want to travel to a place without a shower, without gathering places like libraries and coffee shops where I can get good WiFi?

I am anxious to try out the Weeroll though.  I received my cot, the shelves and curtain rods are installed. 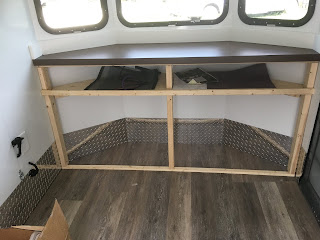 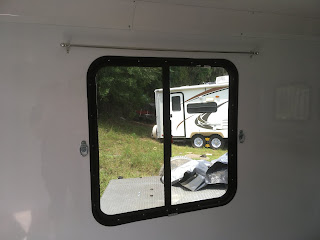 I am envisioning sleeping in the space with screens across the doors and the night breeze flowing over me.  I imaging peeking out at the star-lit sky.  I imagine sitting and walking with my sister (six feet away of course).

I also think that being that I am over 65 and being that I will be traveling over several days, that I would have to self-isolate when I get there for 14 days.  Yuk to that!  I imagine dealing with mosquitoes while I try to prepare my dinners outside or go for walks.

I have decided to wait until the lifting of restrictions has gone on for over 20 days and see if the new cases of COVID start increasing again.

In the meantime I will continue to work on getting my Weeroll ready... just in case.


It was just in September or early October 2019 that I set down my purse and the wrong person picked it up and started using my bank card.  I was on my way home from Wisconsin and Indiana in a town in the Blue Ridge Mountains.

The other day I went to the liquor store (yes, they are open as an essential business).  I was going to buy my friend that worked on the Weeroll some beer.  (That was my excuse.)

When I parked my car in the lot I pulled out my charge card and hid my purse.  I got out of the car and I saw an older man with a face mask that must have called in his order standing with the trunk of his car open.  A staff person was loading a case of something into his car and he showed her his drivers license.

"Oh!  I guess even old folks like us get carded here," I thought.  I better bring in my license just in case.  I reached into my car and retrieved my purse.  Still hanging onto my charge card.

I went in, grabbed a cart and placed my purse on the child's seat.   I zoomed down one aisle to the beer cooler and grabbed the beer, that zoomed down a different aisle to the check-out counter.  There were only about five customers in the whole store.

I paid with my charge card and went to my car, unloaded the beer and returned the cart.  Back at the car I noticed I didn't have my purse.
Was it hidden still?  No.
Was it under the beer? No.
Was it in the back seat? No.
I dashed back in the store and checked the cart.  Nope.
I dashed down the aisles I had traveled, I looked in the hands of any customers I saw.  Nope.
I asked the clerk.  No.

Cuss words.  Hunt more in the car.  No.
Back again to retrace my steps.  No.
Ask a different clerk.  No.

I return home and start to make a call to the bank to report the missing bank card (at least I had my charge card!)

Then while I was making the call, in came a call and I decided to pick it up.  It was one of the clerks.  Someone had turned in my purse!  OH MY!  YAY!!! 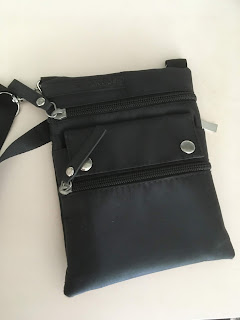 When I posted a thank you on Facebook a friend said I was beginning to act like an old lady that keeps losing things.

I have been instructed to put the dang strap (which it has) over my neck and shoulder.  If I did that it would be easy to keep it with me.  This is my new skill to practice... mindful purse carrying.


I have started to gather data for book three, but I am mixed about what it will be about other than more memoir-journal-style ramblings.  It is hard to gather data when I don't even know what data will be useful.

In the meantime I will keep posting here, and as I tell my story,   I hope that you may find something to make you smile.