I love seeing Bob and Rose again.  They are such down-to-earth, open people.  And so much fun to be around.

When Bob picked me up at the airport he told me he would be in a white van.  I watched as white van after white van went by door 6 where I stood on the curb waiting.  I studied each driver looking for Bob's signature wild hair.   As soon as I saw him I smiled big, he did not disappoint me.

Later when Rose was mentioning he refused to cut his hair, Bob mentioned it was his protection from the Arizona sun...  Like his own built in sun umbrella.  I love it! 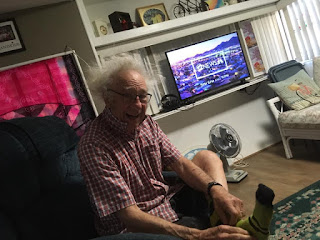 Rose and Bob's white van has built in bunk beds for when they are traveling.  What a great way for me to get used to sleeping in my Weeroll!  I slept soundly in their van in front of their home and they even provided a bucket for me to pee into.  Of course I could have entered the house and used the toilet, but what is the fun in that???

An advantage of this desert climate was I was able to keep the windows down for air and no bugs came in to bother me. 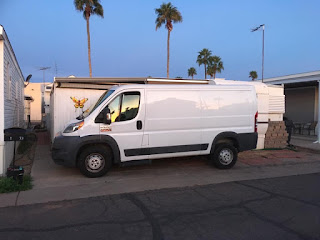 I was up before Bob and Rose so I used the swim suit that Rose loaned me and walked a block to the clubhouse to use the hottub.  There was only one other person in the hottub.  He came over and sat on my side of the tub as he talked.

He was newly retired after 45 years of being a minister.  He and his wife were now snowbirds.  Besides being a preacher in a church in Sturges, SD, the past few years he was also owner of a coffee shop there.  I don't remember the full name but it had the word REV in it.  Rev for motorcycles (Sturges is a big gathering spot in South Dakota for motorcyclists every year) Rev for caffeine and Rev for Reverend.  Pretty cool.  He said the coffee shop was on ABC a few years back because they had 5,000 people paying it forward... Anyway he kept track and ended the paying it forward when it got to 10,000 because it was work to maintain it and track it.  The staff had to always say, Your coffee was paid for by the person in front of you, would you like to pass it forward to the person after you?

After the hottub, I walked to the corner gas station for coffee and passed a different kind of Cathorlic church. 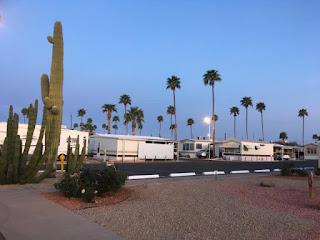 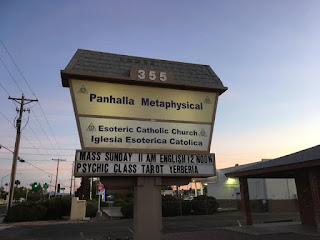 Bob set me up with an e-assist trike they have complete with sun shade for protection from the Arizona sun.  It got up to 83 degrees. 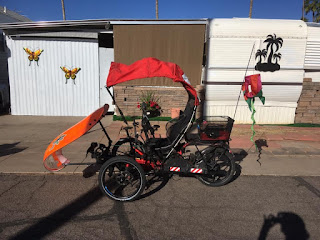 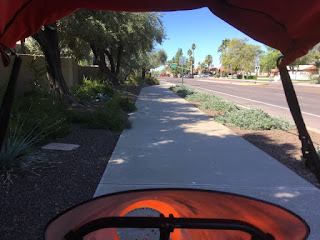 We rode about 9 miles to meet up with their bicycle riding friends.  The group calls themselves the Lizards and many had little lizard decorations on their bikes. 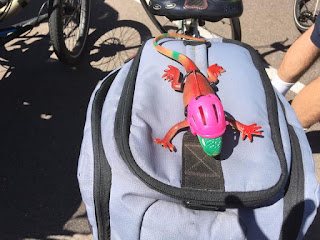 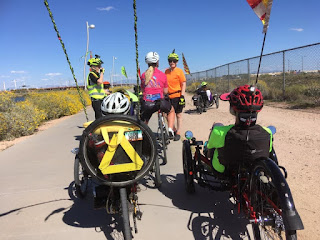 Many of the riders were snowbirds, a few, like me were just visiting.  On rider told me to be sure to ride in the desert after a rain.  The flowers are blooming then and the smells are wonderful.

It was a lovely ride, we arrived home just after sunset.  I showered in the clubhouse and went to bed fully spent.  This night was the switch to daylight savings time, but NOT in Arizona.  Interesting.