Day 62 - Introduction to Boulder, trying to get social

I didn't get much sleep last night.

After a couple cups of coffee, I study the maps and try to figure out how to get to downtown Boulder on our bikes.  We will just ride and explore.

I pack a couple oranges and nuts and water.

Our little apartment does not have air conditioning.  It is already getting hot in there by the time we are ready to head out.  We close the place up hoping it will conserve what little bit of cool we have.

We are located in a quiet residential area close to bike trails and right on a bike route. 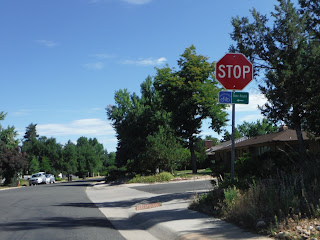 I like that many of the residents have given all or part of their yards to natural landscaping that doesn't require watering or much watering. 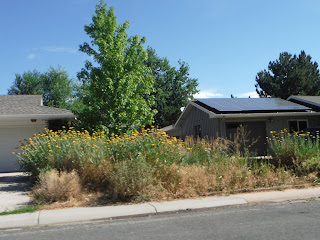 In a few blocks we are on a trail.  There are several intersections with other trails and we have to stop often so I can study the map again. 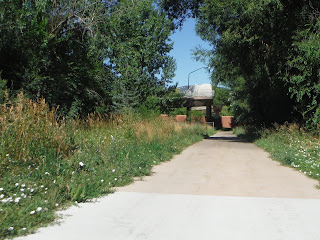 We come upon a traveler.  I ride with him a short while.  He is from Texas and has been traveling for 6 years living on his bike.  We talked about the joy of the simple life. 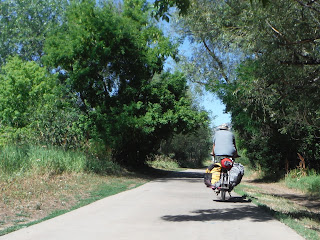 He had the odor of someone who has lived on his own on a bike in hot weather....

His name was Matt and his little weiner-dog is Alfie.  I asked if he wrote in order to finance his journey.  He said no.  But today he was going to go downtown on the mall and play music and put his hat out and see if he could make some money that way.  His first time trying this.

I wished him luck.  Then I had to move over due to bike traffic and our conversation ended as he fell behind and George tucked in behind me.

At one point we stopped in the shade so I could study the map.  We were right next to a pre-school. 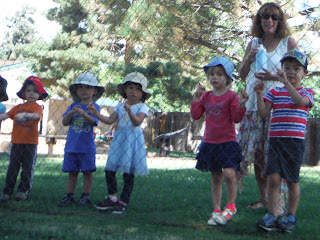 The kids came over and stared and asked a million questions and then "Why."  The boy with the baseball cap said he could run real fast, "Watch," he said.

He took off and the others all said, "I can run fast, watch me!" 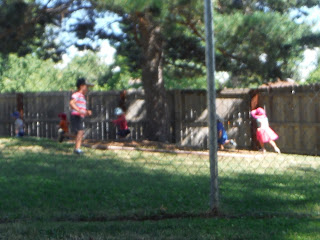 Then they came back and showed us how high they can jump. 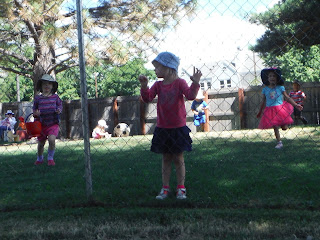 Back on the trail we came to the park and I saw something interesting we might want to do tomorrow evening... 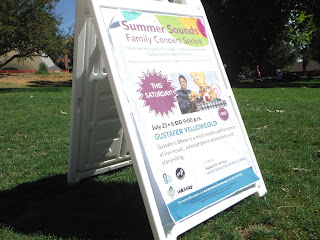 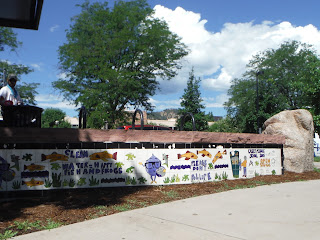 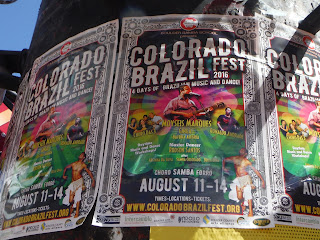 I stopped in and got maps and the info lady told us where the grocery stores were and things we might do. 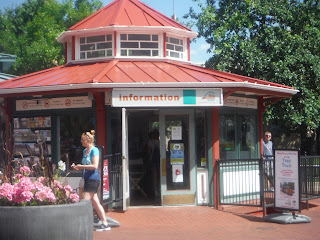 Across the street from the information booth a man was doing some stretching poses and had a bucket out.  A woman came and did some yoga poses with him. 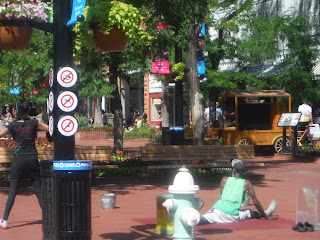 We headed toward the Whole Foods market. 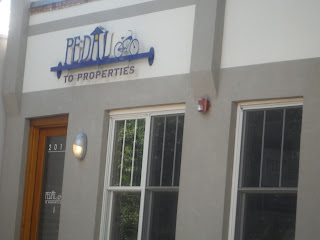 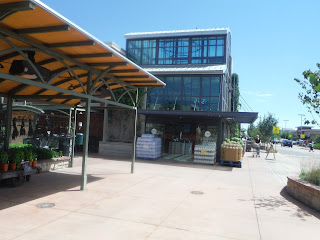 This Whole Foods has a fountain for kids to play in and a picnic area. 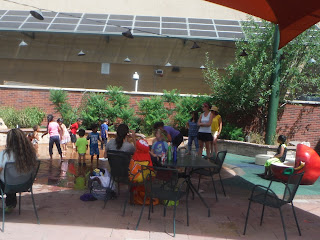 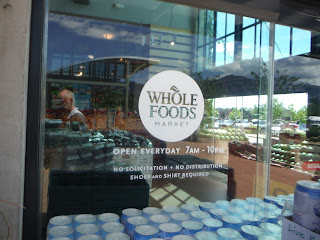 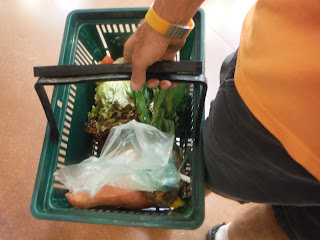 The basket was getting pretty heavy.  So I went and got us a cart.

We took the groceries home and we made ourselves cheese and veggie sandwiches for lunch.  Then I chopped up some of the veggies and used some of the stuff I brought from home and have been hauling all this way to make a pot of chili. 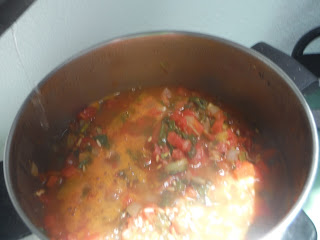 George chopped the onion for me.  Then he quietly surfed and read.  We want a comfortable place to sit.  We have kitchen chairs and a table which is great for eating and working on the computer.

We have a comfortable bed.  We even have a bench outside in the shade.

Jodie called.  She said had some bad news.  I braced myself.  She said she had been investigating and found that George's sister had died in February this year.

We had suspected she was gone.  We knew she had dementia and the last we heard she could no longer swallow.  That means she wouldn't have long.

But the phone to her husband has been disconnected.  We had no way of getting any information because of HIPPA laws protecting patient information.

Jodie had kept searching for her Aunt's name and finally it came up with a birth and death date and a funeral home.  She had been cremated and her ashes were not buried.

Jodie asked how George was doing.  She said she was following our journal so she knew some of the things that we saw happening.  George was standing right next to me while I was on the phone, looking at me.  I told her he was doing good, but he looked sad and was fighting tears right then.

He talked with Jodie for a bit on the phone... or listened and made short comments.. gave short answers.

After he got off the phone, we hugged and he shed a few tears.  But only for a little while.  Then he blew his nose and was ready for the rest of our day. 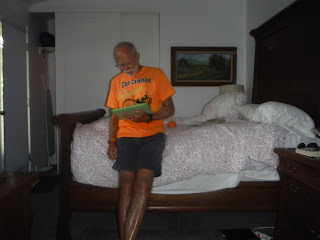 There is always something more we desire... I desire I should say.  George is content most the time.

I had done a lot of hunting on the internet for social clubs where we could go and meet people.  A whole month on our own without people to chat with seems like torture to me.

I found on meetup.com a group that was meeting that night in Longmont, Colorado at a downtown free music event.  Great!  I joined the group and RSVP'd.

The leader said she would be there, up front by the band, with a yellow flag "as usual". 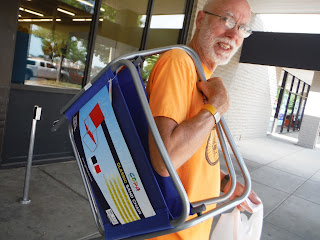 We stopped at Big Lots on our way and picked up a couple beach chairs for $10 each.  I found a great parking spot and we walked to the location of the event. 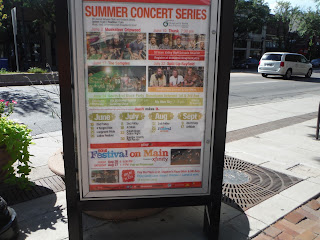 We got a good spot in view of the band.  It would be easy to spot the yellow flag. 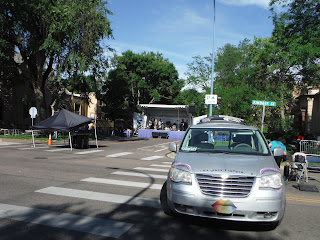 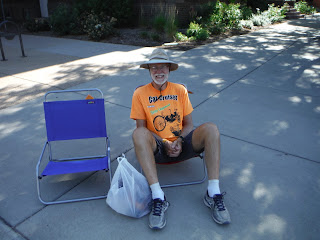 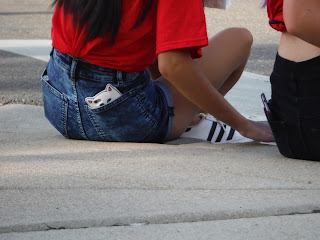 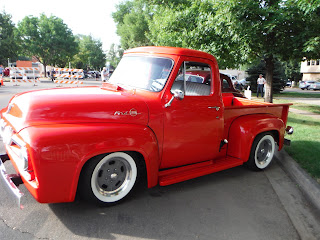 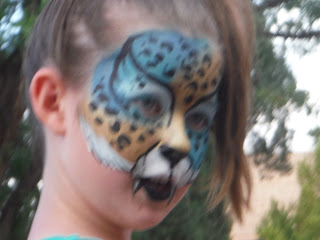 I went around to groups of people who were talking to each other and told them I was looking for the Longmont Social Club.  No one knew of the group, but a few said they were social and we were welcome to join them.  I should have taken them up on the offer.  Instead I kept searching and waiting.

The lead band started.  Split Lip Raymond is a band consisting of three guys.   One of them has a base made from an old gas tank.  It has pretty good sound, actually.  They played a kind of blue grass. 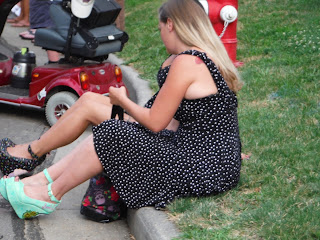 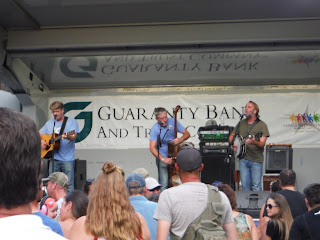 George and I left our seats to go stand closer to the band and watch the people. 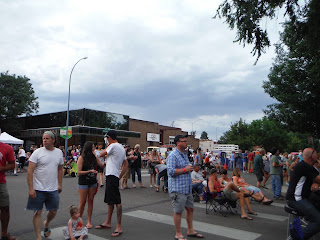 I told George I missed our friend, Frankie.  She can really dance to this kind of music.  He agreed.  He was smiling and tapping his foot.


I kept thinking, if only I had brought my ipad with me.  I could have checked the website.  Maybe she forgot the flag and I could contact the leader and find out where they were sitting.  But my ipad was in the car.

The sky started to look threatening with lightening.  George was ready to leave.  So at 7:30 we headed back to the car.  Before I left I checked my ipad and the meetup group.

The leader HAD forgotten the flag.  She said she was displaying a US flag instead.  I looked through the video and did not see her or the flag.

I was REALLY BUMMED!  I wanted to get this party started in Boulder!

On the way back to the car I dropped the camera on the sidewalk.  I said, "I hope I didn't break it!"

It rained hard on our drive back to Boulder.  We had left our trikes out in the fenced yard.  They were wet now.  Our apartment was hot.  We opened all the windows and set the fans on high.

It took about 1/2 an hour to cool it off.  Tomorrow the weather report says it will be 95 and humid here...

George doesn't like to get in the water anymore... go swimming, I mean.  So I don't know if we will hide-out at the library or go for a ride anyway.

Friday, May 8, 2020 I am grateful for nature.  There are few things that raise my spririt up more than seeing something rare in nature an... 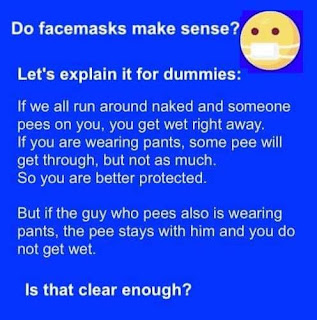